Amy Schumer, who has spent the past two seasons becoming one of the funniest person alive, is also, inexplicably, a feminist. (Christopher Hitchens is rolling over in his grave.) No, I know that term has been loaded lately, what with National Treasure Shailene Woodley’s refusal to be labeled as such, but it’s true. In the past two months, Ms. Schumer has achieved the once-impossible task of making an actually funny rape joke (by turning the issue of military assault into a first-player video game), as well as tackling equally unfunny issues like Internet predators, self-esteem and Tyler Perry.

But Inside Amy Schumer is not above skewering her own gender as well, as with this brilliant bit about the disasters of bachelorette parties. Extra points for featuring Todd Barry!

[youtube http://www.youtube.com/watch?v=UbNblX7k6sw%5D
“Help my best friend is drowning!”
“She’s not your best friend!”
“Really? Then why am I the maid of honor!”

The image of a “rat king” situation of hair extensions and feather boas might be the most aptly nauseating description of the bachelorette party phenomenon that we’ve ever heard. Brava, Ms. Schumer. 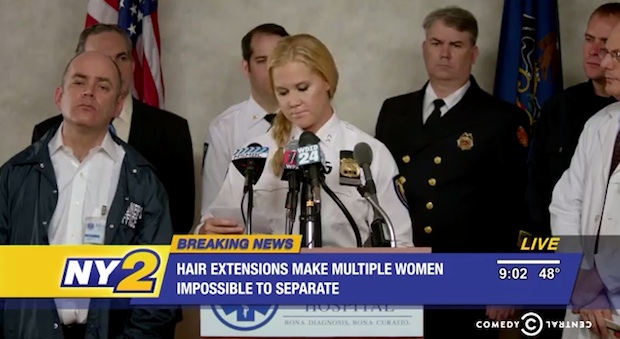