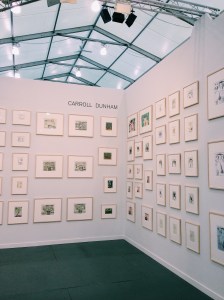 A few minutes after Frieze opened, when the fair gave off a surprisingly sleepy vibe, the dealer Barbara Gladstone was sitting silently with a gallery employee in her booth, which had no visitors yet. She was still wearing her sunglasses (it was raining outside). Could I ask her a few questions about the work she was showing?

“Ask somebody else,” she deadpanned, not looking up at me.

Holy Christ, do I love art fairs! What a great metaphor for the heavy ironies of having to live every day until you die, very possibly alone, having burned every bridge that had been tenderly laid out before you! (Later, I will risk having my credit card declined at the Neue House VIP lounge while trying to buy a $16 glass of rosé–my bank balance is resting, I think, somewhere in the low teens–only to be saved by the VIP lounge’s credit card machine breaking down. Good luck trying to charge it later, guys!) What are some other things I heard today?

– “Desserts are not really my specialty, I have to admit.”

– “We just opened a store there!” [Enormous laughter.]

– “No there are ones with booze in them. The red ones.”

– [The clicking camera of a professional photographer capturing Cecilia Alemani, curator of Frieze Projects, in front, then inside of a Frieze BMW VIP car.]

– “Are they really super, super spicy?”

Eventually, I ate a giant burrito while standing over a trashcan and concluded that “giant burrito” is probably the least appropriate food to eat at what amounts to a day camp for millionaires. Looping back to the Gladstone booth later, Ms. Gladstone–still wearing her sunglasses–was now busy making sales. She was showing 215 drawings by Carroll Dunham made between 1979 and the present, all arranged chronologically.

Mr. Dunham compulsively drew–on a variety of materials, from manila folders to hotel napkins–and for a long time he kept everything as archival material in his studio, which the artist and his dealer combed through to find a selective sample to exhibit. Abby Margulies, Gladstone’s communications director, mentioned that the trajectory of the painter’s whole career could be traced through these drawings (e.g. “His penis studies we see a lot in the ’90s,” she said, motioning to a corner of the booth featuring big black penises etched on wood).

Throughout, she referred to the booth as an “exhibition,” saying it could easily have been mounted at the gallery. (They went so far as to make a book of the drawings specifically for Frieze.) She said they were selling “very well,” and left it at that. Ms. Gladstone was not available for comment.