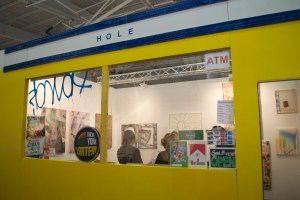 The Hole. (Photos by the Observer)

NADA New York, a Frieze art fair offshoot by the New Art Dealers Alliance at Basketball City on Pier 36, began with a mad dash at 10 a.m. as collectors raced to the booth of the bookseller Printed Matter to buy prints by Israel Lund. There were about two dozen of them, and they were going for $400 at first, until the price went up as they sold out. They were all gone in 10 minutes, according to Jordan Nassar, who was working the booth.

“The security guards seriously had to tell people, ‘No running,'” he said.

NADA is, after all, another art fair, though in a lot of way it’s a more dignified–or at least calmer–affair than Frieze, which can feel in turns claustrophobic, hedonistic and overwhelmingly dull. Here, it’s easier to stumble upon pleasant discoveries, like the Lower East Side gallery Eleven Rivington putting Meyer Vaisman in the spotlight for the first time in nearly 15 years. The artist has two works in their booth depicting mirrors that had the phrase “ARS BREVIS VITA LONGA,” a reversal of the old aphorism. This is appropriate for Mr. Vaisman, who rose to fame alongside Jeff Koons, Haim Steinbach and the rest of the ’80s art world’s requisite bad boys. Mr. Vaisman retreated to Barcelona in 2000 after a show at Gavin Brown’s Enterprise, his last in New York until Eleven Rivington remedies that later this month. The two works on view were Fed-Exed yesterday, said Augusto Arbizo, Eleven Rivington’s director, and it’s his first taste of Mr. Vaisman’s new work.

“He went and took care of himself,” Mr. Arbizo said of the artist’s years as a recluse. “He definitely had a situation where it was good for him to get away from the art world for a while.” Mr. Arbizo didn’t care to elaborate on that, but he took me around the corner to the outside wall of his booth and showed me a work by Jackie Saccoccio, who was once Mr. Vaisman’s studio assistant, bringing everything full circle.

I could hear the sound of loud pops as I walked through the space, which turned out to be coming from the booth of Josée Bienvenu, whose floor was covered in bubble wrap by the artist Ana Bidart. (“A floor installation,” according to Jessica Lin, who was working the booth. “It’s for sale and it’s specific to NADA, but I don’t really know about the price. It’s very conceptual.”)

The Hole gallery eschewed a booth altogether and built a little bodega, complete with a door, a big window with a sign hanging out front that said “Come in we’re open!” and a lottery placard. I walked in and the place was unmanned–kind of a big risk for any bodega, much less an art fair booth–save for a small puppy, resting on the makeshift counter. The dog belonged to Kathy Grayson, the Hole’s proprietor, who finally entered with a few customers trailing her. They were interested in buying some art (a sign behind the counter said “CASH ONLY,” which was very likely not true), though they were more interested in the dog. (“Oh my God!” one woman said. “I love it! Can I buy this?”) She settled instead for Rose Eken, who had made ceramic sculptures of beer bottles, cigarette butts, a bic lighter, duct tape, etc. The woman was inspecting a sculpture of a bottle of Budweiser, a half-smoked joint and, at the suggestion of Ms. Grayson, the cap of a Carlsberg to “set everything off.” 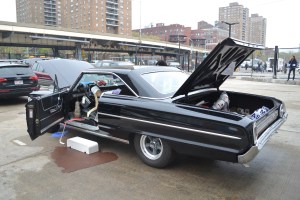 Later, Jose Martos of Chelsea’s Martos Gallery was showing me a piece by Justin Lieberman, a small glass case resting on the floor that was filled with scraps of paper. “Biennial catalogues cut in pieces,” Mr. Martos said. “He’s a crazy motherfucker.” I was inquiring the price when he cut me off and said, “You want to see something crazy? Follow the stickers.” On the floor were orange stickers that read “Camp In My Ass” and led to a side exit out of the building. Outside was a parked Ford Galaxie with the trunk and doors open, filled with stuff.

“This is Camp In My Ass,” Mr. Martos said matter-of-factly. Earlier, he said he sold a Matthew Higgs piece out of the car for $100. He reached into the backseat and pulled out two bumper stickers by Mr. Lieberman–one featured a picture of Ronald Reagan and said “My Other Car Is Your Mom” and another had the Pope with the phrase “Smoke Crack Out of Your Ass.” Mr. Martos picked up a coffee mug from the dashboard.

“Look at this,” he said. “Ryan Foerster made this. It’s fucked up.” The mug had a picture of a woman defecating into her own mouth. “For when you have your mother-in-law over for dinner!”

Back inside Mr. Martos handed what appeared to be several thousand dollars in cash to a woman standing in the booth. As I walked away, he was saying to someone, “Go look at the car! This is all bullshit!” 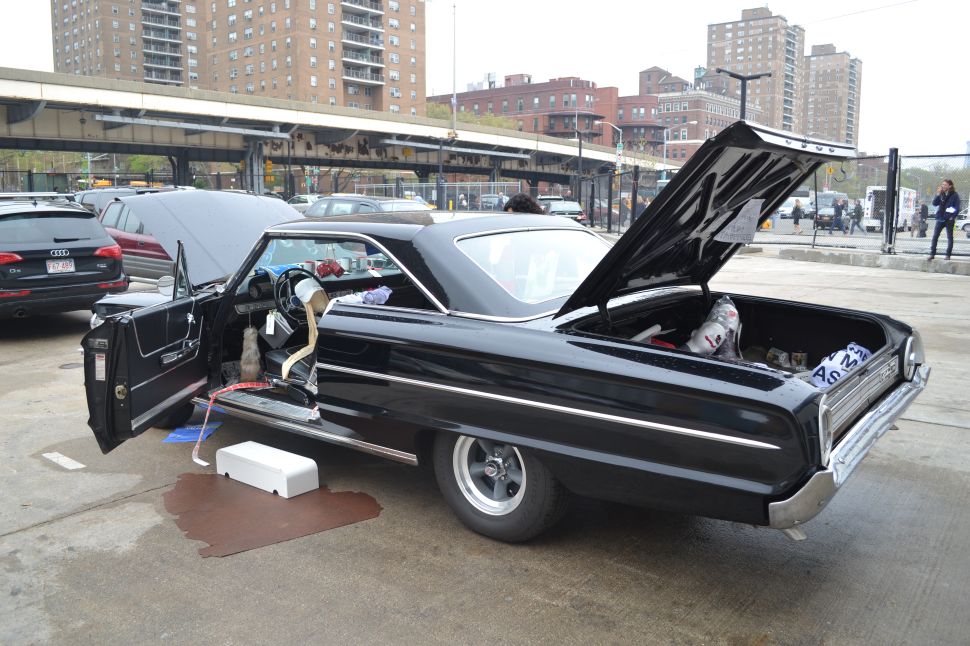