It’s only been two months since ABC capped off Bachelor Juan Pablo’s nauseating besito-fest, but already runner-up Andi Dorfman is getting ready to start her quest to find love. With this season’s Bachelorette starting Monday, May 19, we felt it’d be prudent to acquaint ourselves — and you — with this season’s crop of eligible bachelors.

To help you keep everyone straight (there are at least 17 contestants named Nick), we assigned a superlative to each strapping young lad, so you know who’s most likely to live up to every existing Bachelor/Bachelorette stereotype. Who’s most likely to pass out in a drunken stupor at the first cocktail party? Who’s most likely to rappel down a skyscraper and say, “If we can do this, we can conquer anything”? Let’s find out.

Most Likely To: Constantly talk about how excited he is for Andi to meet his mom. We’re not ruling out the possibility that he gives her his mother’s most cherished piece of jewelry on the first night.

Most Likely To: Emerge from the limo on the first night wearing a cringe-inducing costume, causing Andi to laugh politely while she contemplates her decision to come on this godforsaken show

Most Likely To: Not be ready to commit to a serious relationship — dude can’t even decide whether he prefers the city or country.

Most Likely To: Try way too hard during a sports-themed group date, and accidentally get himself concussed (a.k.a getting Ames Brown’d)

Most Likely To: Be coerced by producers to use embarrassing metaphors like “For once, there’s a fire I don’t want to put out — the one in my heart.”

Most Likely To: Get really fired up and borderline violent when he finds out one of the guys isn’t there for the right reasons.

Most Likely To: Embarrass Andi by trying to bench-press her on the first night

Most Likely To: Be that guy who goes pretty far but you’ve never actually heard him speak

Most Likely To: Have a girlfriend back home who he swears he broke it off with — until she shows up in tears at the Bachelorette mansion.

Most Likely To: Feel conflicted that he ditched his kid for eight weeks so he could find love on a reality TV show

Most Likely To: Be that guy on the first night who tries to get everyone to jump into the pool with their clothes on, but turns out to be the only one who jumps

Most Likely To: Be way too smart for all the stupid crap he’s forced to do on this show

Most Likely To: Tell Andi the fact that they survived a bungee jump off a mountain is proof they can trust each other 4eva

Most Likely To: Gain Andi’s trust by being “vulnerable” during a conversation about how much he misses playing baseball

Most Likely To: Freak Andi out for being too much like a Canadian version of Juan Pablo

Most Likely To: Win our eternal love because THAT SMILE.

Most Likely To: Be saving himself for marriage

Most Likely To: Most likely to have only come on the show to see if he could win

Most Likely To: Cry excessively when he gets the boot and is forced to board a plane back to Wisconsin.

Most Likely To: Get unnecessarily and uncomfortably competitive during some stupid karaoke- or beauty pageant-themed group date

Most Likely To: Get so drunk on the first night, he’s unable to stand at the rose ceremony, because for some reason that’s what generally happens to the beverage distributors.

Most Likely To: Plan on taking Andi to a nudist yoga retreat instead of a typical hometown date

Most Likely To: Get so wrapped up in his bromances with the other contestants, he forgets to care about scoring a one-on-one date

Most Likely To: Make some “always the wedding planner, never the wedding-haver” quip 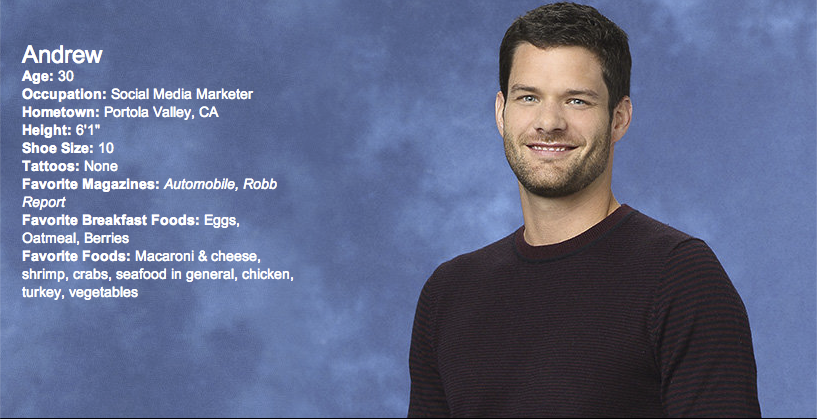