The former ballroom of the Montauk Club, now converted to a living room. (Celeste Solomon/the Observer)

When Jonathan and Catherine Sheer first walked into the ballroom of Park Slope’s Montauk Club in 2010, they found the space undeniably lovely. It was also undeniably ridiculous, at least as a home for a couple with three young children.

The top two floors of the 125-year-old club had been converted to condos in 1996, but on the third floor, a dilapidated ballroom spanned almost the entire length of the building. (A ladies parlor brought its total east-west expanse to more than 65 feet.)

It was also in terrible condition. The hardwood floor, collapsing in places with a half-installed radiant heating system, felt “like a trampoline” underfoot.

“What an incredible space,” Mr. Sheer remembers thinking. “Too bad it’s such a wreck.”

But Ms. Sheer was taken with the light-flooded expanse, decked out in the architectural equivalent of a party dress: intricate plaster friezes, coffered ceilings and elegant stained glass windows, their tops tinted a mossy green in the main ballroom and rose pink in the ladies’ lounge. Ignoring their more practical impulses, they bought the Montauk Club condo for $2.45 million. Among the many residential extravagances of old New York—dumbwaiters, servants’ quarters, butler’s pantries, cedar-lined cold storage for furs, pocket doors and fireplaces—ballrooms are, without a doubt, the most absurd: preposterous indulgences from the era of dance cards and string quartets. Though what beautiful indulgences they are—vast, column-free spaces suffused with the lingering good cheer of countless celebrations.

Still, what in the world is one to do with a grand ballroom in this day and age?

“Most people redo them as living rooms, but who wants a 35-by-75-foot living room?” said A. Laurance “Larry” Kaiser IV, who helms boutique Upper East Side brokerage Key-Ventures.

“They’re pretty to look at, but these days, people would rather have big closets and double-sized bathrooms. Those huge reception rooms? Hell no.”

Case in point: the Pierre penthouse, which just recently marked its one-year anniversary on the market. (An anniversary which is, of course, no cause for celebration at all.) The triplex, now asking $95 million (down from $125 million) absorbed the hotel’s former ballroom, which measures a daunting 78 by 46 feet—a space of such outlandish proportions that even when furnished as a living room, calls to mind a hotel lobby rather than a home. The former ballroom of the Pierre hotel measures a mind-boggling 78 feet long.

It appears that the most recent owners, the late Martin Zweig and his wife Barbara, also struggled with the space. Listing photos show a grand piano, a harp and innumerable couches, tables and chairs in what appear to be at least six different seating arrangements. At one point, Mr. Zweig also installed an antique billiards table in the center of the room “as a touch of ornate whimsy,” according to The New York Times. The room might also have accommodated a full arcade without any trouble.

“It’s just too freaking big!” exclaimed one broker. “No one’s going to hang out in that living room.” The double-height ballroom of the former St. Moritz, now Ritz Carlton, as it was when Christopher Jeffries lived there.

But try they do. In 2012, casino king Steve Wynn paid $70 million to take possession of Christopher Jeffries’ Ritz-Carlton duplex, complete with a double-height ballroom. A decade earlier, Mr. Jeffries’ had claimed the ballroom as his living room after his company, Millennium Partners, converted the top of the former Hotel St. Moritz into condos.

Photos of Mr. Wynn’s re-decoration recently published in Architectural Digest show that he toned down the opulence of the 44-foot-long room, done in a very baronial fashion by Mr. Jeffries’ decorator, with the liberal use of plaid and nookish arrangements of furniture.

Other homeowners find alternative uses for their ballrooms. In the 1980s, fashion designer Richard Tyler and his wife Lisa Trafficante would hold fashion shows in the top-floor ballroom of the Gramercy Park South mansion, built by the socially ambitious “Mamie” Fish to best Caroline Webster Schermerhorn Astor. The promotional use most likely would have pleased another former owner—Benjamin Sonnenberg, the foppish father of public relations, who threw legendary parties in the ballroom during the 1940s. “I think a really good dinner party should consist of an archbishop, an authoress, a lady of easy virtue, a tycoon and a Powers model,” he once told The New Yorker The top-floor ballroom of the Stuyvesant-Fish mansion on Gramercy Park.

The Tyler-Trafficantes furnished the space with 12 ballroom sofas bought at auction, according to The Times. The auctioneer had opened bidding with a rather sarcastic “If you happen to have a ballroom, these will come in handy.”

But sources told the Observer that the stunning 78-by-46-foot room has seen far less intensive use since psychiatrist and investor Henry Jarecki bought the mansion in 2000, turning it into a headquarters for his family’s charitable trust, the Timber Falls Foundation.

Underuse is a fate that befalls many ballrooms.

People have changed the way they live—before they had to have the flower room, the ironing room, all these spaces you just don’t need anymore,” said Corcoran broker Anne Snee. “The idea of ballrooms in a house today, well, they’re just ridiculously large and outmoded. But hotels still need them, clubs need them.”

Though these, too, have started to go the way of waltzes and white gloves. When the Whitehall Club at 17 Battery Place—a former social club for shipping industry honchos—was converted to condos in the 1990s, the ballroom disappeared along with all the club’s funny little customs, like serving sauerkraut juice at breakfast (to assuage hangovers, presumably). The Whitehall Club’s ballroom at 17 Battery Place, before it was broken up into condos.

“The ballroom had all these high windows facing the bay and the river,” said one architect who worked on the project. “But the way the developers wanted to put the partitions in, you lost all sense of the space, the perspective.”

The ballrooms that do remain in some private homes tend to be the smaller ones. There is one in the former mansion of Penthouse publisher Bob Guccione at 14-16 East 67th Street and one in Woody Allen’s former townhouse at 48 East 92nd Street—a property so stunningly preserved that a broker once told the Observer it made the Vanderbilt-Fabbri mansion on East 62nd, a Beaux-Arts masterpiece, “look like a piece of garbage.”

The Sloane Mansion at 18 East 68th Street, which was bought at auction by Carpathian billionaire Alexander Rovt in 2011, retains a 21.5-by-30-foot ballroom that remained miraculously untouched when the house was subdivided into apartments.

The more modestly-scaled ballroom of 18 East 68th, before its renovation.

“It’s on a totally different scale than the Pierre or the Ritz-Carlton ballrooms; it is very much a residential scale,” said Stephen B. Jacobs, the architect whose firm is restoring the mansion to single-family use. Nonetheless, it will still be used as an “entertaining room, not as the living room.”

The room has wood-paneled walls and built-in oil paintings, a rarity, according to Mr. Jacobs. Asked if the new owners had an actual need for such a ballroom, Mr. Jacobs suggested that the question of need was somewhat beside the point.

“This is a very upscale house for a very, very wealthy family that can afford it,” he said. “They don’t live the lifestyle that you and I live.” They were also, he noted, installing an indoor swimming pool.

Eastern Bloc billionaires are big on ballrooms. Last fall, Roman Abramovich tried to buy the Berwind mansion at 828 Fifth Avenue, which has a magnificent Louis XIV ballroom with wedding cake ceilings described by architectural historian John Taurananc as “about as close to Versailles as residential New York has to offer.” (The deal ultimately fell through.) The former ballroom of 828 Fifth has been described as “as close to Versailles as residential New York has to offer.”

There are even a few wealthy ballroom dancing aficionados who use the spaces for their intended purposes. In fact, a few floors above Mr. Wynn’s magnificent Ritz-Carlton living room, the owner of the penthouse, a ballroom dancer, once hired Nicholas S.G. Stern to install one for dancing.

“It was a functioning ballroom, designed with dance-ability and acoustics in mind,” Mr. Stern told the Observer. “It was generously sized, bigger even than a prewar living room, and it was kept by and large empty except for some chairs that could be moved around.”

Because isn’t uncluttered open space the most exquisite thing of all in a city as mercilessly crowded as New York? And what, after all, is the point of a ballroom if you can’t dance in it? The Sheers at home in their ballroom turned living room. (Celeste Solomon/the Observer.)

When we visited the Sheers’ ballroom on a recent sunny morning, their three children were, indeed, gamboling across the vast expanse, which retains its sweeping scale even after a meticulous and well-considered renovation that involved replicating missing pieces of the frieze and designing mahogany wainscoting. Besides partitioning off a small 10-by-12 room and a book nook from the corner of the ballroom, they left the huge open space a huge open space. It’s now a sparsely furnished living room, illuminated by giant paper globe lights.

“I prefer a more Zen aesthetic,” said Ms. Sheer, who explained that just taking a few small chunks off the ballroom helped to transform it from an overwhelming space to a human one.

“It was a challenging floor plate, much like a loft, said Ms. Sheer. “The big problem I’ve had living in lofts was that they don’t feel like a home. I wanted a prewar feeling for the bedrooms and an open, light-filled entertaining space.”

The result feels, delightfully, like a prewar loft, with five airy, bright bedrooms tucked into the eastern side of the apartment. The Sheers recently listed the home for $5.25 million. The best part, Ms. Sheer said, has been the parade of perfect strangers who come through and tell them how much they love the ballroom. 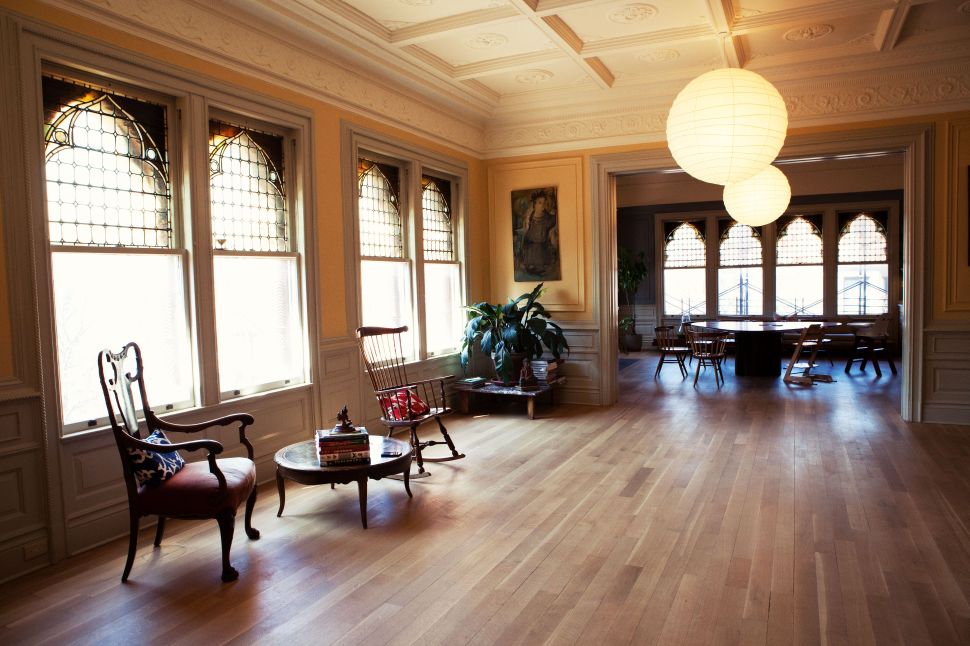