A less than enthusiastic Mayor Bill de Blasio said today he has not moved yet to lift the city’s ban on keeping pet ferrets, despite the Department of Health’s request to change the law.

“No, we have not acted yet,” Mr. de Blasio told reporters at an unrelated press conference today. “There will be a lengthy process to determine if that will actually come to pass. I have not been briefed on their rationale.”

“That decision is months away,” Mr. de Blasio added.

Animal rights activists and at least one Brooklyn woman have called for the ferret’s return, arguing that the rodent-like creature is no more dangerous than any other legal pet.

The furry creatures were banned from the city by Republican Mayor Rudy Giuliani two decades ago when a report at the time determined they could be harmful to children. Mr. Giuliani mocked Mr. de Blasio yesterday for his apparent interest in bringing ferrets back, but Mr. de Blasio sounded far more noncommittal about the ferret’s future today.

“I have not gotten the full briefing in terms of their rationale for the change, pros and cons et cetera. Obviously we want public input,” the mayor said. “All it means is one agency has proposed the change.”

Correction: An earlier version of this story featured an image that misidentified an otter as a ferret. 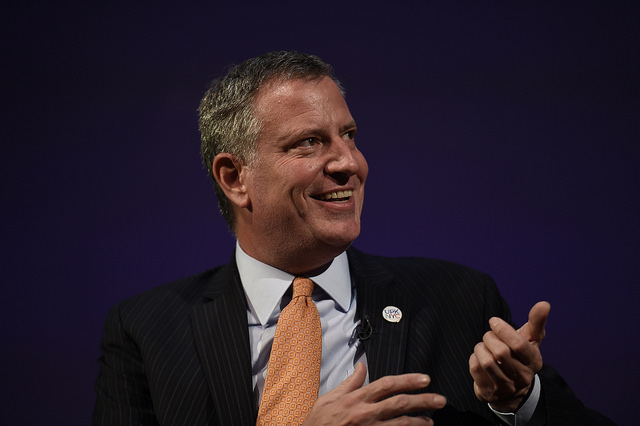