Ever wanted to get an aerial Instagram without that pesky airplane wing? Well, yesterday five skydivers got the ultimate opportunity when they leapt from the sky wearing nothing but a wingsuit.

Organized by Red Bull, Jeff Provenzano, Sean MacCorma, Amy Chmelecki, Jon Devore and Andy Farrington all made the awe-inspiring dive together on Sunday. The group jumped off a plane 7,500 feet above the city and in two minutes, they traveled two miles, starting from the Financial District and landing on a barge in the Hudson River.

They flew as fast as 120 mph in their wingsuits, according to Red Bull’s website. The suits are high-tech jumpsuits that add surface area to the body with extra fabric between the legs and arms (think flying squirrels). The stunt was a promotion for the Bethpage Air Show, which will take place this weekend on Long Island’s Jones Beach.

“I’ve been dreaming about this since I was a kid,” said Mr. Provenzano, who grew up in New York. “It’s been years of looking up at the big buildings and wondering if there is a day that I can fly over them. That day was today.”

Watch their video here, if you’re not afraid of heights: 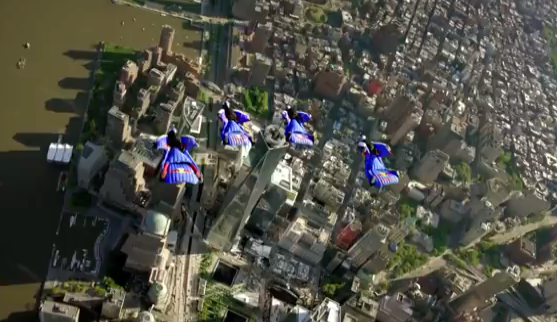