NEWARK – The day after he spoke at length with Newark Mayor-elect Ras Baraka, former Newark mayor and current U.S. Senator Cory Booker (D-NJ) said that their talk came down to a key word in critical times for New Jersey’s largest city: support.

“We spoke about the city, and about the plans and visions that [Baraka] has for the city, and how I could be supportive,” Booker said on Monday, less than 24 hours after PolitickerNJ.com reported that Baraka’s campaign manager, his brother Amiri “Middy” Baraka, Jr., and Booker’s statewide director Mo Butler arranged for the two politicos to break bread at Newark’s Andros Diner on Sunday.

Booker and Baraka have largely not seen eye-to-eye regarding Newark politics. Baraka won his South Ward council seat in 2010 by defeating Booker-backed Oscar James II. He was part of the then-mayor’s opposition until Booker departed for the Senate after winning a special 2013 election for the late Frank Lautenberg’s seat.

But with grave problems facing Newark, such as the estimated $93 million municipal budget deficit, a potential state takeover of the city’s finances and a murder rate that led to a 25-year high of 111 homicides in the city last year, Booker said that it was time to work with Baraka following his victory in Tuesday’s mayoral election, not fight with him.

“It was clear that what we talking about was getting the city the resources that it needs to be successful,” Booker said. “Years ago, back under [former Newark mayor] Sharpe James’ administration, there were tremendous federal resources that were supporting urban areas, from cops grants to housing money. A lot of that money dried up during my administration, especially during the recession when those dollars were not coming through.

“What I had to do as mayor was develop a lot more philanthropic resources for our parks and our police department. What [Baraka] and I talked about was how I could get him federal and philanthropic resources to support his vision and his mission,” Booker added. “That’s exactly what a Congressional delegation, House or Senate, should be focused on doing for all of our urban spaces to help them to be successful.”

Before he moved on after speaking with students at Rutgers-Newark about initiatives to alleviate student debt, Booker, Newark’s last elected mayor, seemed to pass the city torch on to Baraka.

“I think that there is a lot of wisdom in the city of Newark that picked a really promising mayor,” Booker said. “I think that Mayor Baraka is going to do a phenomenal job. I just want to help him in any way that I can.” 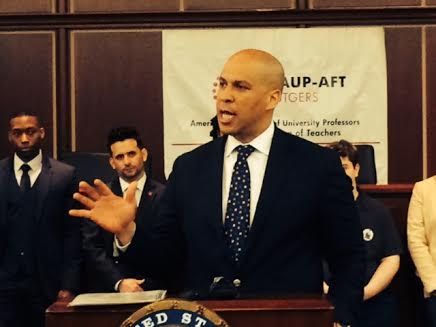