TRENTON – It’s been brutal in CD3 and it just got more brutal: brutal and ugly and angry, as movement conservative Steve Lonegan released an ad today going after GOP establishment-backed Tom MacArthur, then convened a press conference on the steps of the Statehouse to personally ram his opponent.

“What this monster did to them,” said Lonegan, referring to his GOP Primary rival and a cease and desist lawsuit MacArthur filed to stem the blows of Lonegan’s attacks concerning claims filed by California wildfire disaster victims against MacArthur’s former insurance company.

The lawsuit includes Liz Curtis, a campaign worker for Lonegan, and “a single mother,” according to the candidate.

“I will protect Liz Curtis at any expense. It is despicable that he would resort to such a thing,” said Lonegan, trying to extend a picture he wants to convey of MacArthur as a multimillionaire victimizer – both on the insurance front as a former principal at York, and now as a candidate seeking to fire-blanket free speech with a heavy-handed lawsuit leveled at Lonegan and associates.

The Lonegan ad, which the campaign launched today, featured another so-called MacArthur victim from the York insurance claim case, who was made to “jump through hoops” by adjusters affiliated with MacArthur, Lonegan said.

“I have to be one of the most vetted people in the country,” said the candidate, who ran unsuccessfully for governor in 2005 and 2009 and for the U.S. Senate last year. “My skeletons are out there dancing around in the daylight.”

But not MacArthur’s, who won’t release his tax returns, the candidate griped.

Already running their own cable ad chopping away at Lonegan, the MacArthur campaign hit back.

Speaking to the York case, MacArthur Campaign Consultant Chris Russell said, “They’ve come up with three claims out of a million. There are lawsuits in the insurance industry. Those claims were dismissed, and they were all settled after Tom left the company.

“What he’s trying to do is tear down a successful business owner with a 30-year career,” Russell added. “Steve Lonegan claims to be a defender of private enterprise but in this campaign his attacks sound a lot like the ones Barack Obama used against Mitt Romney.”

Part of MacArthur’s attack on Lonegan includes a TV highlight of the movement conservative expressing skepticism about federal Hurricane Sandy aid, going so far as to tell News 12’s Luke Margolis that he would have voted against federal Sandy aid.

Russell said that misstep has toppled Lonegan under a rain of high octane attacks in the seaside district with two weeks remaining in the campaign.

Lonegan came into the race riding the narrative that he convincingly beat Booker last year in the 3rd District.

But Booker didn’t bother challenging him in the Republican-leaning Third, Russell argued.

Now Lonegan has a serious fight on his hands, and the enemy isn’t a Democratic Party looking to stay out of Ocean and Burlington but two GOP organizations in sync and intent on defeating the renegade Republican.

“This is a guy who was measuring the drapes for his congressional office, and now all he’s measuring is the house he bought so he could move into the district,” harrumphed Burlington GOP Chairman Bill Layton.

Outspent and outdueled on television to date by a 4-1 margin, Lonegan said if people embrace MacArthur they will have affirmed a tool of massive insurance companies.

Asked if he would champion greater regulations on insurance companies if elected, Lonegan said, “This requires closer scrutiny by the public.” 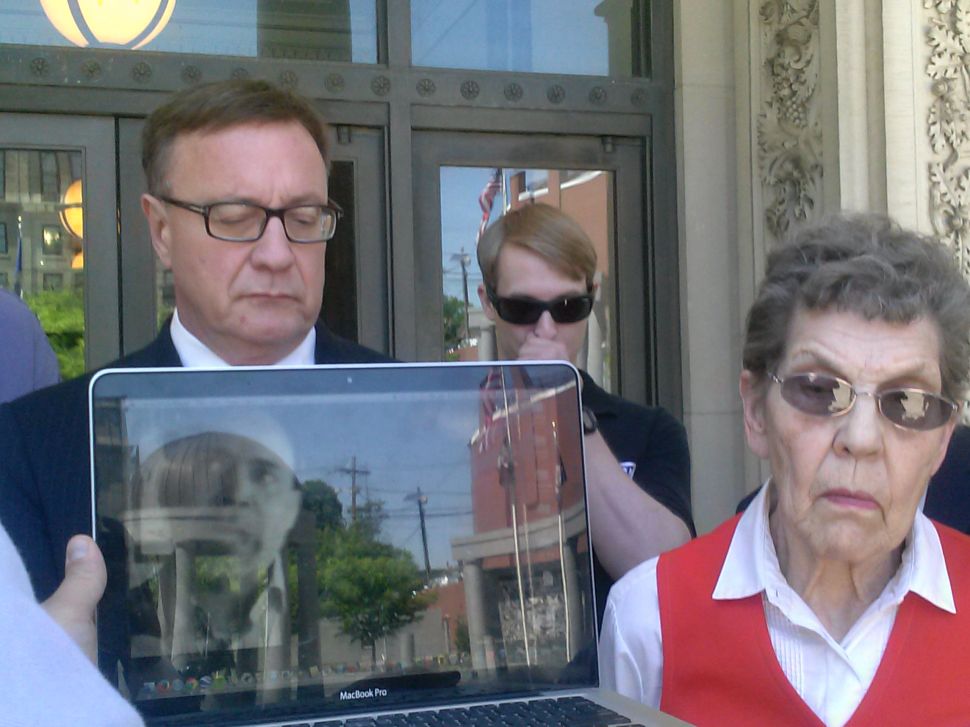