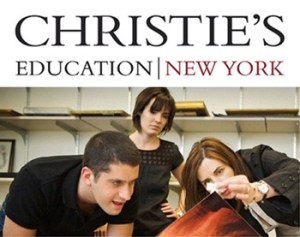 Christie’s Education announced its fall courses this week, one of which includes Collecting Contemporary Art, a certificate course that answers the question, according to the auction house’s description, “What’s driving the current trends in the contemporary art market?” The course is made up of seven classes, which meet three days a month for seven months. Christie’s Education in London has offered courses in the past specifically focused on collectors, though this is, according to Melissa Abernathy, a spokesperson for the auction house, the first time the New York branch has offered a certificate course on art collecting.

She described the certificate as “just like a certificate from any other institution,” which is to say a piece of paper saying that one has completed the course. (Christie’s also offers accredited Master’s degrees in contemporary art.) Each class costs $1,800. Prospective students can opt to take only a single class, though the certificate is for those who complete all seven (that’s a grand total of $12,600, plus a $35 registration fee).

Christie’s clearly has a stake in helping to forge what might be the next generation of collectors. Earlier this month, the auction house held the most expensive contemporary art sale of all time—totaling $745 million dollars. In fact, with that record-setting auction and a combination of day sales, along with a special evening sale of contemporary art that focused on younger collectors (presumably not the ones who would take the aforementioned class, but who knows?), Christie’s very nearly pulled in $1 billion over the course of three days this May. At the time of that announcement, Steven Murphy, Christie’s CEO, released the following statement:

The current commentary on the art market currently avoids what is truly driving it. It is the work of art itself. It is an extraordinary cultural moment. When works of art regularly sell for these figures, with a queue of bidders lined up from across the globe to try to secure the piece, and many thousands more viewing the art online, it is not the promise of a financial return that is creating the urgency to own the work of art. It is the art that is drawing people in increasing numbers to museums, art fairs and galleries all over the world. More people than ever before want to connect with art; and the growth in this audience globally, makes the few, individual, true masterpieces available more valuable than ever before.

Make of that interpretation what you will, though I’ll draw your attention to a recent blog post by the artist Richard Prince, who saw a record for his work set at Christie’s emerging collectors sale (which incidentally or not was named after a work by Mr. Prince): “I feed the hand that bites me. The auctions might think they have something to do with what I make, but they don’t. What they have is what they’ve always had… themselves.”

Ms. Abernathy added that the auction house’s collecting course is not specifically designed for collectors, but is “open to anyone.”

Filed Under: Arts, the best things in life are free