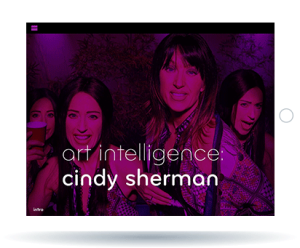 Art Intelligence, which in the immortal words of New York Times scribe Carol Vogel is “a series of educational apps for iPads, featuring art, architecture and design” and is available through iTunes “for 99 cents, like the other apps,” has launched an edition on artist Cindy Sherman with what is likely the greatest feat of art historical parsing that has ever been produced:

“She’s the Meryl Streep of Selfies. The Madonna of the Art World. The Gloria Steinem of Dolling Up, Leaning In, and Saying Cheese. She’s artist-photographer Cindy Sherman and she’s now the subject of a gorgeous new app for iPad from Art Intelligence.”

The Madonna of the Art World! We’re flying dangerously close to a “she must be a lucky star”-level pun here, folks. It continues:

“The app’s unique platform allows you to swap roles and shift identities along with Sherman, from the ‘I Am Woman’ seventies through the ‘Girls Just Want to have Fun’ eighties to the ‘Real Housewives’ new millennium.”

As of press time, world leaders were unavailable to comment on the news that we live in the Real Housewives Millennium, but it ruined at least one reporter’s afternoon.