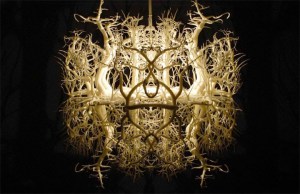 As it turns out, the Collective Design Fair, now in its second edition, is the design Mecca for the likes of A list art dealers like Dominique Levy, David Maupin and Sean Kelly, not to mention Valentino and Jacques Grange.

There’s plenty of quality mid-century material at the fair, which runs through end-of-day Sunday at Skylight in Moynihan Station (better known as the Beaux Arts US Post Office) on West 33rd Street.  It’s been a long goodbye to French dix-huitième gilt furniture (now totally déclassé), then later Art Deco by Rateau and Ruhlmann, followed by the Gallic Modernists.  Now those fittings by Charlotte Perriand and Jean Prouvé are too cher for even decorator pocketbooks.  A trickle down pattern emerges: The interior design set, hipster art directors and more are now going for American and Scandinavian designers from half a century ago.

Out of 34 dealers, 13 feature work mid-century icons like Ray and Charles Eames as well as Arne Jacobsen alongside the usual suspects George Nakashima and Wendell Castle. And there’s a fair amount of material by lesser names with really good lines.  A must see are a pair of pine chests by Pritzker Prize-winning Mexican architect Luis Barragan.  His spare design is a rarity and it can be seen on the stand of ADN Galeria.

Where you find surprises at this fair is in the contemporary work. Head for the Philadelphia based Wexler Gallery and catch the rather stunning work of the Danish collective HildenDiaz.  Their 2014 Forms in Nature, a computer-generated chandelier in white Polymer, is not to be missed.  With delicate branch forms in white, this creative riff on lighting is more fantasy than mere functionality. “It’s a magical other-worldly forest of trees and root systems in miniature,” said Lewis Wexler of the work, which casts tendrils of shadows. The price is just shy of $8,000.

At Maison Gerard is Miguel Cisterna’s linen-like panels embroidered with sequins in a somewhat abstract design of a towering Tyrannosaurus rex.  The Chilean designer works in Paris and the gallery commissioned the textile for the fair.  It’s tagged at $85,000.

On the stand of Grey Area, the company run by Kyle DeWoody (her mother is art collector Beth Rudin Dewoody) is Cheryl Ekstrom’s Marshmallow sofa, based on an original design by George Nelson and cast in stainless steel.  Think of Ms. Nelson as the Jeff Koons of the design world—a bit kitsch but well worth noting.

The jewelry here is spectacular, and also tells of a recent shift in taste.  Catch the Ettore Sottsass gold earrings along with the Alexander Calder and Salvador Dali brooches with London dealer Didier.  One of the Calders will run you close to $100,000.

Less expensive is the jewelry of Jenny Holzer and Kiki Smith.  But what kind of price hike can you expect five years from now for artist jewelry? A handsome one, according to Didier Haspeslagh. “As recently as a decade ago, a Calder went for under $10,000 and today a great piece is $1 million,” he said.  Or think of it this way when calibrating the worthiness of such an investment:  Sotheby’s just rang down Dali’s 1949 platinum, diamond ruby and blue enamel Eye of Time brooch for a staggering $1,055,000 in a Impressionist/Modern art sale on Thursday.