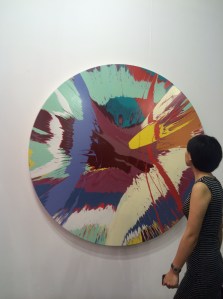 While Oscar Murillo’s chocolate factory churns out candy back at David Zwirner’s New York space—where no paintings are displayed—the Asian market has snapped half of the six on view in Hong Kong on the first day of Art Basel’s second Hong Kong edition.

“We based the booth around Oscar,” with the express mission of introducing the artist to this market, the gallery’s London director, Angela Choon, told Gallerist. Those sold all went to collections in Asia: one in mainland China, one in Hong Kong and one to the Asia-Pacific region. Hauser and Wirth reported multiples sales in the six figures to Chinese private collections.

But it wasn’t just the usual crowd this year—seasoned Asian collectors noticed many new faces from mainland China on the VIP day, now that the Basel brand has been established in the region.

“There were definitely more new collectors,” said Hong Kong collector Adrian Cheng, who said he had bought 15 works that day. “I usually recognize all the collectors, but these are people coming from second- and third-tier cities in China”—places like Wuhan, Chongqing, Chengdu and Qingdao, in comparison to first-tier cities Beijing, Shanghai, Guangzhou and Shenzhen (the later of which shares a border with Hong Kong). 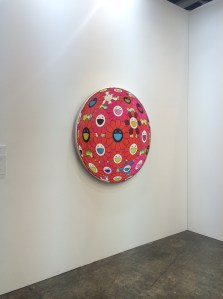 Freeman Lau, a designer and vice chairman of the board of directors of the Hong Kong Design Center, attributed those visitors to the glut of luxury developments in their cities, and the branding that accompanies it. “There are still a lot of hotels, office buildings and other developments not just looking for content but something that fits the needs of the project,” he said, and contemporary art spells luxury. For example, he mentioned a conceptual work he saw at the fair, in which the artist had measured and documented the size of prison cells around the world. “I like that,” he said, “but can you imagine it in a hotel?”

That explains in part why colorful, figurative or brand-recognizable works have a major presence at the fair, as well as easily digestible text-based or wry conceptual work. White Cube, which opened a Hong Kong space in 2012, brought multiple works by Damien Hirst, including a new work priced at £800,000 pounds ($1.34 million), said director Matt Carey-Williams. Another Hirst work had sold by Thursday afternoon. Other galleries with Hong Kong outposts brought work in a similar vein: Perrotin had Murakami, KAWS and an Elmgreen & Dragset. Gagosian brought Murakami, along with Richard Prince, a Dan Colen “Kiss” work, Ed Ruscha and Zeng Fanzhi.

Nick Simunovic, who run’s Gagosian Hong Kong outpost, said, compared to Basel’s other fairs, in Miami Beach and Switzerland, there seems to be more interest in primary-market  than secondary-market material. He too reported sales to mainland Chinese buyers.