For the most part, there exist two categories of townhouses in New York—treasures and teardowns. Landmarking has much to do with determining whether a home falls into one category or the other—more than a few terribly-remodeled homes have been saved from the wrecking ball by virtue of standing in a landmark district—along with available air rights, sale price and interior features.

Now, however, we may need to add a third category (or at least a sub-category) to the list, courtesy of a highly unusual condo conversion/preservation/gut renovation under way on the corner of Madison and 74th. Known variably as 33 East 74th Street or the Whitney brownstones, the condos being developed by Daniel E. Straus make use of eight existing townhouses—six on Madison and two on 74th—preserving the buildings’ landmarked exteriors while hollowing out the insides for sprawling super-luxe homes that range from 3,851 square feet to just over 10,000.

In a new video, architect Richard Metsky, a partner at famed preservationist firm Beyer Blinder Belle, discusses how they’re transforming “the last intact, aggregate brownstones that you find on Madison Avenue today,” plus two mansions on 74th into what a spokesperson for the development described as “devastatingly vast” trophy residences.

Given the landmark constraints of the site, which is in the Upper East Side historic district, and the fact that the stoops in the Madison Avenue historic district were removed to accommodate retail in the past, the developer decided to embrace an unusual approach, according Douglas Elliman broker Katherine Gauthier. (The buildings were, until recently, used as office space for the Whitney Museum, which is moving downtown in the near future.) “They literally scooped out the insides; it really has a movie-studio quality,” said Ms. Gauthier. “They didn’t want some obscure glass building, they wanted to blend in. And to make grand apartments—it’s nearly impossible to find these kinds of expanses on the Upper East Side.”

Ms. Gauthier said that the units are graciously laid out, with en-suite bathrooms for all bedrooms and entry chambers built into many of the rooms. The interiors are being laid out by hotel designers Champalimaud.

And though the units won’t formally hit the market until the fall, there’s already a signed $17.5 million contract for a three-bedroom and a couple of other deals in the works. Prices range from $14 million to over $40 million for the 10,000 square-foot quadruplex, carved from the 33-foot-wide former Atterbury mansion.

It might be too early to say for sure, but that, it seems, will be the going rate for colossal new, old-fashioned condos on the Upper East Side. For such a hefty slice of history, though, who’s going to complain? 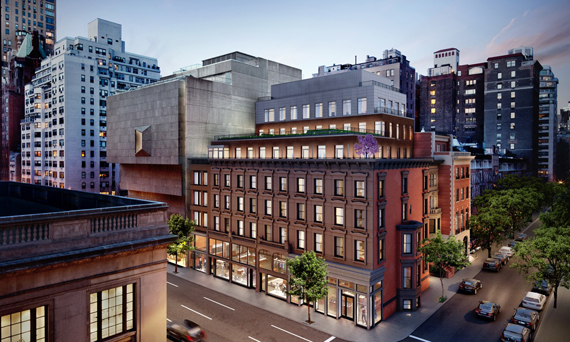