Romantic problems are a lot funnier when Curtis Granderson reads them. (Getty)

The crosstown rivals have united for an MLB Fan Cave video in which they read Craigslist Missed Connections, written by people who couldn’t get up the nerve to publicly state their affection.

In the first story, “A/C train uptown phone games and Fun,” Curtis Granderson describes a girl playing a game that looked like “Tetris meets Fruit Ninja.” John Ryan Murphy then picks up the post by recalling their conversation about her love of the band Fun. David Robertson chimes in, saying she was pretty cool, and Eric Young Jr utters the great final line, “Tell me what color shirt I was wearing, and I’ll take you out for some ice cream or something.”

The next story, “You Shared Ur Grapefruit with Me,” is written by a man named Dan to a girl named Liz. Mr. Murphy talks about how delicious the grapefruit Liz was eating smelled. Travis d’Arnaud reveals that Liz taught Dan how to peel the fruit so it would taste the best. Finally, Mr. Robertson says he would love to speak with Liz again “despite your love for Blink-182.”

“Who Framed Roger Rabbit” is about a girl Anthony Recker describes as “looking all Jessica Rabbit.” Mr. Young’s reaction was just like Roger Rabbit, “eyes popping out my head.” Mr. d’Arnaud assures himself the woman is not out of his league, and Mr. Murphy asks her out for coffee.

Last but not least, Mr. Robertson talks about a “Beautiful Lady in Uggs.” Mr. d’Arnaud says he loves her, and Mr. Young guesses her name is Daisy.

Check out the video below: 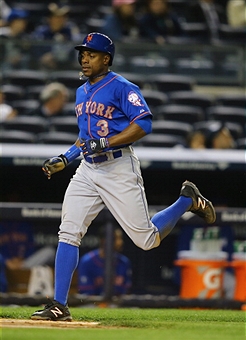