Jon Stewart is in disbelief. (screengrab)

One day after the Late Show‘s David Letterman mocked the state’s upper legislative chamber for extensively debating whether yogurt should be the official state snack, The Daily Show‘s Jon Stewart joined in.

“Ladies and gentlemen, I give you the New York State Senate,” the late-night comedian offered last night as he played clips from the Tuesday debate. “I’m telling you this is may be the best 40 minutes any legislative chamber, anywhere in the country, has ever spent.” When State Senator Liz Krueger interjects with more questions, however, Mr. Stewart exclaimed, “Are you fucking kidding me! … Krueger, I got no patience for this nitpickery. Nobody–nobody!–wants to hear any more of your petty complaints about the yogurt bill.”

He then played a clip of her raising the issue of lactose intolerance as State Senator Michael Ranzenhofer, the bill’s sponsor, notes the existence of lactose-free soy yogurt. Mr. Stewart was visibly taken aback by the spectacle.

But Mr. Stewart wasn’t done there and a second Daily Show segment was dedicated to faux “Code Pinkberry” protesters and Mr. Stewart’s advice for the state legislature.

“The good people of New York do not give a shit,” he informed them. 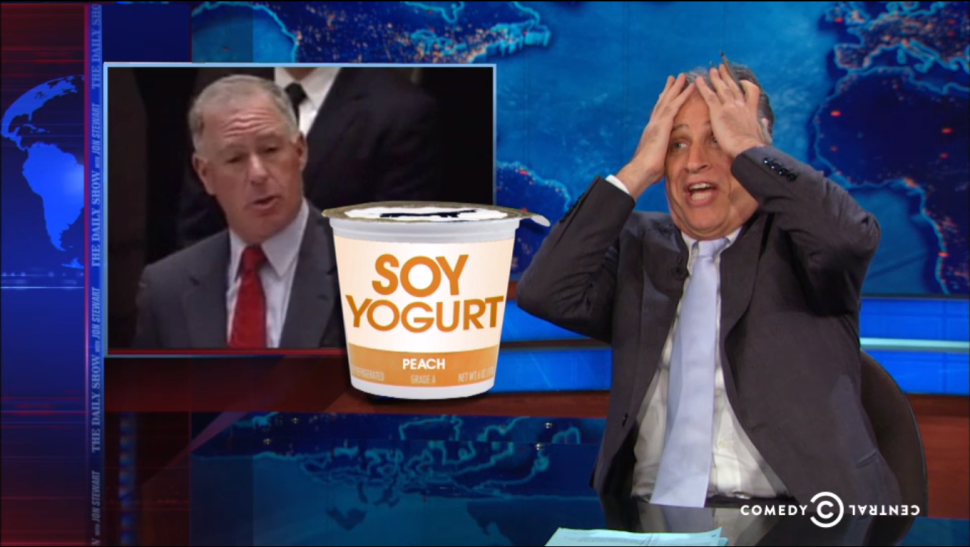