Way back in the mists of time—and by this I mean the mid-1990s—David Poe was the soundman at CB’s Gallery on 313 Bowery. Like many soundmen, he also had a little sideline in writing and singing songs. Where he differed from many soundmen (though certainly not all) was that the songs he wrote were really good.

T-Bone Burnett must have thought so, because he produced Mr. Poe’s self-titled 1997 debut album. I saw Mr. Poe play several of the songs on that disc in the pseudo-Moroccan, mirrorball-pillared confines of another long-gone and sorely lamented Manhattan club, Fez. His melodies and his acoustic guitar work were so gentle and elegant that the depth to which his words cut the heart came as a surprise. Most intriguing was the eerie reticence of his singing. Much like those great depressives Nick Drake and Elliott Smith, he rarely raised his voice above lullaby pitch. It was almost as if he were afraid the passion, hurt and uncertainty contained within his songs might explode through the room like a dirty bomb if he got too loud.

Mr. Poe is based in L.A. these days. He’s done pretty well for himself over the past 15 years or so, getting his music on TV (including a prime spot in Nashville), writing multiple movie and dance scores, being selected for a composer fellowship at the Sundance Institute, producing albums for others (most notably Regina Spektor and Jenifer Jackson). But one thing he hasn’t done for some time is put out an album of his own songs and tour behind it.

That’s changing now. Mr. Poe’s first NYC gig in a dog’s age will be at Rockwood Music Hall this Friday, and he’ll be previewing the contents of his fourth studio album, God & the Girl, due out in July. Having already heard it, I can tell you that the intensity of his writing and vocal delivery is undiminished, but if you need further proof, listen to the song above: “When I Fly,” a highlight of the new album, as captured at a recent solo appearance in Boise. 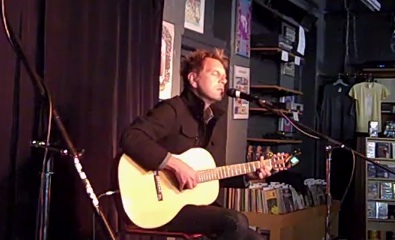