At a Fleet Week reception at Gracie Mansion this morning, Mayor Bill de Blasio hailed the return of the annual event, welcoming dozens of sharply-dressed sailors with open arms.

“I want to say on behalf of all 8.4 million New Yorkers, we love Fleet Week. We are thrilled Fleet Week is back. It’s a special time of year for this city,” he gushed.

“It has been, over many years, a time that we look forward to, we cherish. It’s an exciting time in New York City, and we love it because we get to see people that we respect so much, the men and women of our armed services here, enjoying our city,” he added. “We get to see the extraordinary ships of our Navy and the other services. And the fact is, that we also get to enjoy your enjoyment of our city.”

Last year’s festivities were canceled thanks to the federal government sequestration. But this year the event is back on, with thousands of Navy sailors and other military personnel in the city.

Mr. de Blasio, whose father fought overseas and was seriously wounded in in Okinawa, was careful to show his appreciation for the support the armed services provided during Hurricane Sandy Hurricane rescue efforts. “Our armed services were there for us. In fact, one example that Navy sailors helped–at public housing developments in Brooklyn helped to pump out so people could start to resume their lives.” he said.

Mr. de Blasio also shared his own experiences recalling how his wife’s father served in the U.S Army and fought in Italy and France while her mother worked on an assembly line at a Springfield, Massachusetts armory.

The mayor said his mother had worked at the office of War Information as his father served in the U.S Army–though his first choice had been the Navy, Mr. de Blasio said. At issue: the famous de Blasio height genes.

“Mr. Secretary, please, don’t think ill of me, but my father loved the sea, he loved ships. His preference was the United States Navy. And he tried, after Pearl Harbor, to go into the Navy. He had the same challenge I have. He was about 6-foot-5. The Navy appreciated his enthusiasm, and told him it would not be a good fit with the size of their ships,” Mr. de Blasio told the  Secretary of the Navy, Ray Mabus.

The mayor then excused himself to head to Long Island for the State Democratic Convention, where he was scheduled to speak–but not before asking Mr. Mabus’s permission first.

“I know I have understanding from the secretary,” he said, noting that Mr. Mabus had previously served as the governor of Mississippi. “So the secretary will understand that I have to go now out to Long Island to a convention to nominate our current governor, Andrew Cuomo, for re-election. And the minute I explained that to the secretary I had his full support to go off on that important mission. He would not have wanted his nominators to show up too late.” 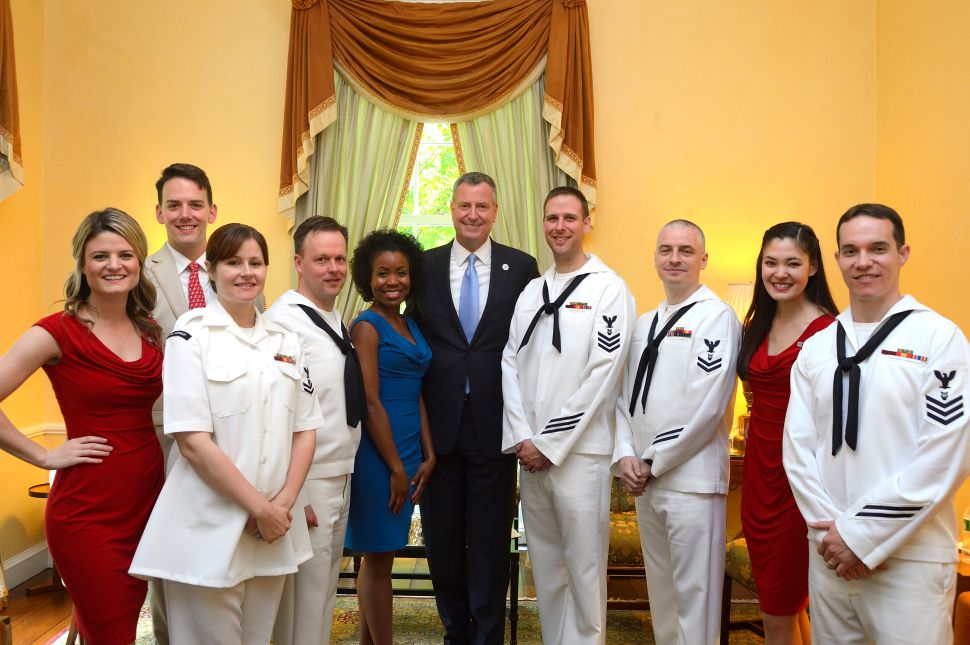