Update after the post, regarding last week’s Hannibal revelation.

Fans of Game of Thrones raised hell the other week, when Jaime Lannister raped his sister Cersei in the same room as the corpse of the king, who was also his nephew, who was also his son. The act was perverse on a number of levels–obviously–but one of the biggest reasons people chose this act of sexual violence on the show (as opposed to the many, many others) to focus on was because in A Storm of Swords, the novel of George R. R. Martin’s Song of Fire and Ice series on which it had been based, the act had been consensual.

“By changing consensual incest to incestuous rape, GoT appeared to be changing Jaime’s character,” Andrew Romano explained in The Daily Beast. Ser Lannister’s trajectory in the books had turned him from villain into a more redeemable, if flawed hero. But this act on the show seemed to break entirely with the novels arc, despite Martin’s protests that the TV scene was legit in the world of Game of Thrones.

Last season, the show teased out its first major deviation from the book, when the Red Wedding death toll racked up some major characters who were still alive in the world of the books. Maybe some people find it easy to reconcile these split narratives, despite the fact that both the book and TV series are now being developed simultaneously, like some alterna-universe fan fiction of each other.

But it’s not just Game of Thrones. Look at Hannibal, which not only killed off Dr. Chilton long before he ever got the satisfaction of seeing Hannibal Lector behind bars, but has turned hero Will Graham into a complicit cannibal in last week’s episode. Sure, it could be a fake-out, and Will may not have killed gossip reporter Freddy Lounds and served her up as suckling pig, although that would be a pretty major cop-out if true. ** Graham on Hannibal exists in a timeline before Red Dragon, the Thomas Harris book in which he was introduced as an FBI profiler who had captured Hannibal Lector, and which makes no mention of this…proclivity. Hannibal is a great show, and I understand why shows need to “break” away from their origin texts. To succeed as a show, they need to differentiate themselves from these stories, present us a world that takes a concept and evolves it into a new idea. Like, you know, Fargo.

But Fargo doesn’t have the same characters as the film version, so there’s no question of continuity. Smallville is perhaps the closest predecessor in terms of messing with mythology, although there might be conditional allowances for comic book stories, which historically change and reboot their heros’ origins every couple of years. Agents of S.H.E.I.L.D. might have faced bigger backlash for resurrecting a character who had died in The Avengers movie.

Maybe this shouldn’t bother us, and we should just accept that these shows are their own animals, separate from the constraining narratives of the original story. But when you start to change what motivates these characters and fundamental details of their persona–like whether or not they are a rapist, or a psychopathic cannibal–don’t be surprised when the reaction is mixed. I know we all like our anti-heros dark and brooding, but maybe there are just some lines that shouldn’t be crossed.

**UPDATE: So it turns out I was wrong! It happens! Freddy Lounds is alive and well, thanks to Jack Crawford and Will Graham working together to…find a corpse to set on fire? They did that, right? Who was in Freddy’s wheelchair, because there was definitely a body. Also, I’m not if Jack “Dealing with my wife’s impending death by refusing to acknowledge it” Crawford is in any better mental shape than sweaty, sweaty Will Graham at this point. In order for you to believe that Will’s been working with the FBI since he got out of jail, you have to buy the head of the FBI allowing Graham to walk around after murdering Randall Tier and posing his corpse in a variety of interesting formations and locales, including a saber-toothed tiger at the museum and as an Indian god over the fake grave for Freddy Lounds. 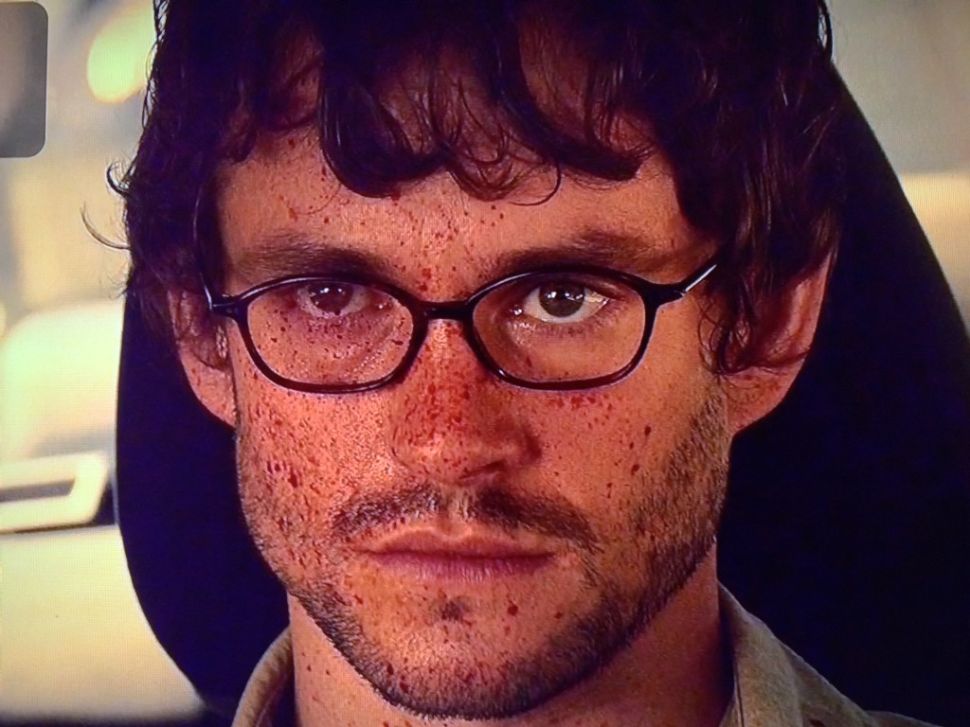