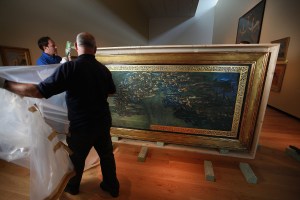 There are major differences between investing and art collecting—ones that everyone used to understand before the prices of artworks became so astronomical. One is a passion, the other a means of earning a profit. Investors are advised to diversify their holdings in order to mitigate risk. Art collectors don’t buy a basket of artworks—a few Impressionist paintings, a couple of Old Masters, some Chinese scroll paintings, some contemporary sculptures—but concentrate on the type of art or few artists that appeal to them.

In recent years, however, high prices for sought-after artworks and personal collections whose value forms a significant percentage of an individual’s net worth have made the concept of investing in art increasingly accepted. Private equity art funds have sprung up around the world, and art specialists in personal banking departments of financial institutions (such as Bank of America, Citibank, Deutsche Bank, Emigrant, Goldman Sachs, HSBC, J.P. Morgan Chase and U.S. Trust) have attracted the interest of many who see art as a source of long-term profit.

The oldest of these funds, the London-based Fine Art Fund Group, which was founded in 2001 and began the process of acquiring art in 2004, has six separate investor-based funds; between 30 and 40 individuals and institutions invest in each fund, with a minimum investment of $500,000 to $1 million. The first two funds have reported annualized gross internal rates of return on investment of 16 percent for sold pieces, based on the sale of approximately 100 artworks in the past seven years, generating $100 million, according to chief executive Philip Hoffman.

The Fine Art Fund still has plenty of artworks to sell—those remaining are stored in a Swiss warehouse or are loaned out to museums and even a few of the investors—and the full story of how successful it has been will only be known at the end, but its first fund has until 2018 to close. Some artworks may not produce high or any profits. “We are aiming for net returns before management fees of between eight and nine percent,” Mr. Hoffman said. He compared these favorably to other non-art private equity funds that have higher net returns but also are more highly leveraged. (“No borrowing has taken place with any of our funds,” he said.)

Enrique Liberman, the president of the New York-based Art Fund Association, a three-year-old advocacy and educational organization, said it is unclear how many art funds exist. However, he claimed to be “aware of 25 funds now in existence and others in the process of development. Recent market estimates indicate that these funds manage between $700 million and $1 billion.”

The Art Fund Association aims to “promote art funds as a valid alternative investment, educate the art market and investment community about the characteristics of art funds and guide the fund managers in adopting best practices for the formation and governance of their funds,” Mr. Liberman said. Alexander Kemper, who manages the Kansas City-based Collectors Fund, said reasonable and optimal rates of returns are “highly dependent on the type of art being acquired by the fund.” A fund focused on emerging artists will have far greater swings in prices than one collecting the works of more established artists. Most art funds look to diversify their holdings and “seem to be targeting a 10 to 20 percent net internal rate of return for their members” on an annual basis.

The Collectors Fund collected between $20 million and $30 million between 2007 and 2010 from approximately 100 mostly local investors. The entry price was $100,000, although some contributed $500,000 and higher. When artworks are sold, 40 percent of the net profits (after a 20 percent management fee) are distributed to investors with the remaining 60 percent reinvested into additional art purchases. By the seventh year, 100 percent of the net profits will be split between the investors as the fund begins a three-year phase-out period. The Collectors Fund now has two funds.

Many art funds look to loan purchased artworks to art galleries and museums for exhibitions. “It’s a good marketing tool for investors,” Mr. Liberman said. Both Artemundi Global Fund, an art hedge fund founded in 2009 that is based in the Cayman Islands, and the Fine Art Fund regularly loan works for special exhibitions, including to New York’s Museum of Modern Art, the Los Angeles Country Museum of Art, Paris’ Pompidou Centre and London’s Tate. The Collectors Fund also loans artworks from its collection, although many of the borrowers are its investors.

Art’s “transaction” costs—commissions, buyer’s premiums, shipping and insurance—are, Mr. Hoffman said, “by and large much higher than in stocks and real estate, but the opportunity to make gains in the short-term are also much higher in art than in those other categories. With stocks, in a year or two, you might be able to make 2, 3, 4, 5 percent, but with works of art, you have the opportunity to make serious money.”

“Art has a number of similarities to the stock and real estate markets, earning a compound annual rate of 9.23 percent as compared to 9.73 percent for equities over the last 50 years, based on financial academic studies,” said Artemundi CEO Javier Lumbreras. “As a real and tangible asset, it can be appraised by comparable analysis in a similar manner to real estate. However, unlike real estate, it appreciates tax free and does not incur property taxes. Also, maintenance costs, which we have calculated at $1,280 to maintain a million-dollar worth of art for a year, tend to be very low compared to real estate.”

The art trade “is an imperfect market,” Mr. Hoffman said, with a general lack of information “about where the market is for any given object at any given time.” In the midst of a booming art market, it might seem that any semi-competent art fund manager could do well, but it hasn’t appeared to be so easy. “You can’t build an industry based on mispriced assets,” Michael Moses, a retired New York University professor co-produces a Fine Art Index that rates the art market to the Standard & Poor’s 500. The likelihood of individuals outperforming art dealers and art fund managers, he said, “picking winners in the art market, is a very low probability event.”

Perhaps because the art fund business is so uncertain, the Fine Art Fund has begun to diversify its services, with 40 percent of its business now managing the art portfolios of individual private families and curating private collections.