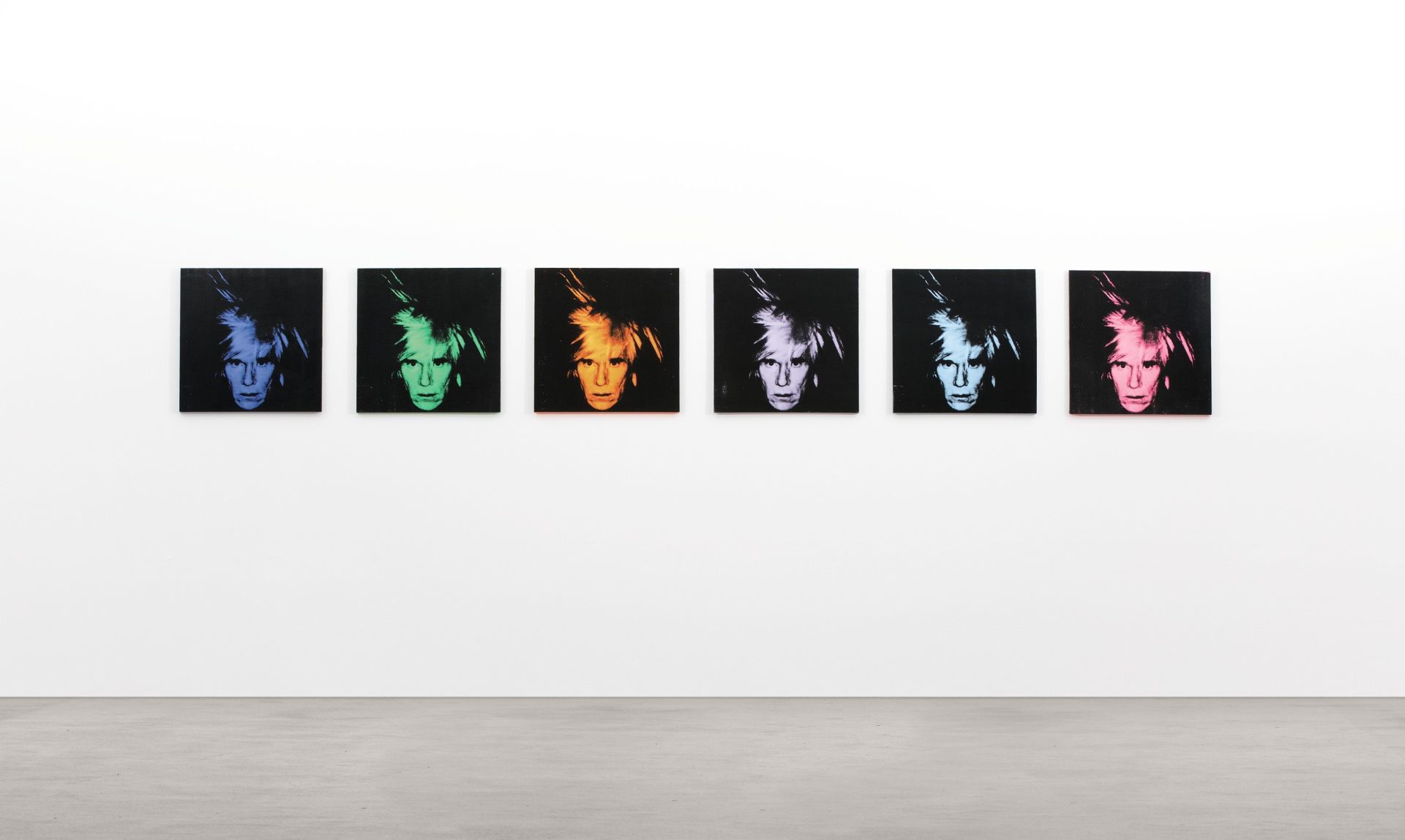 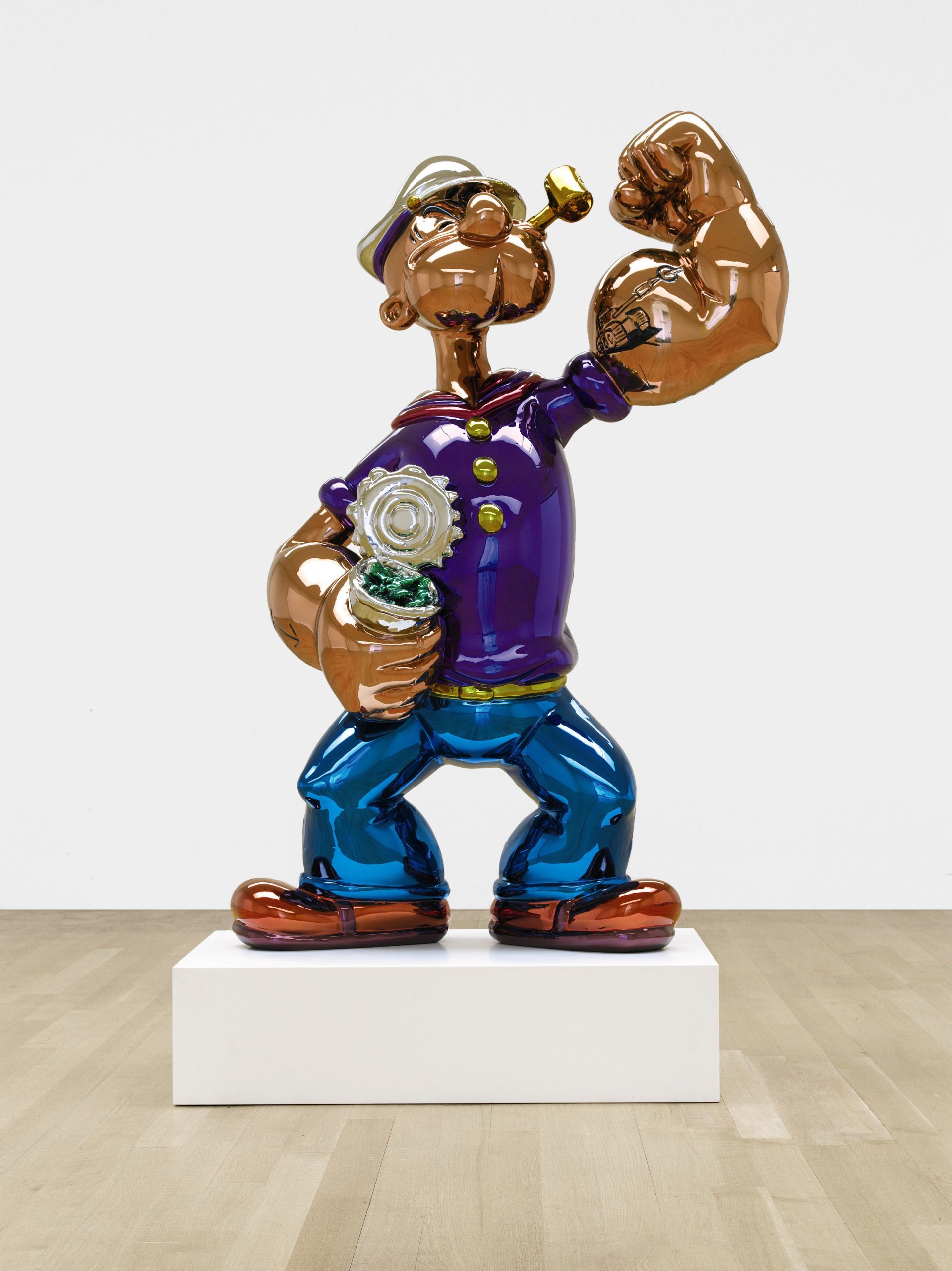 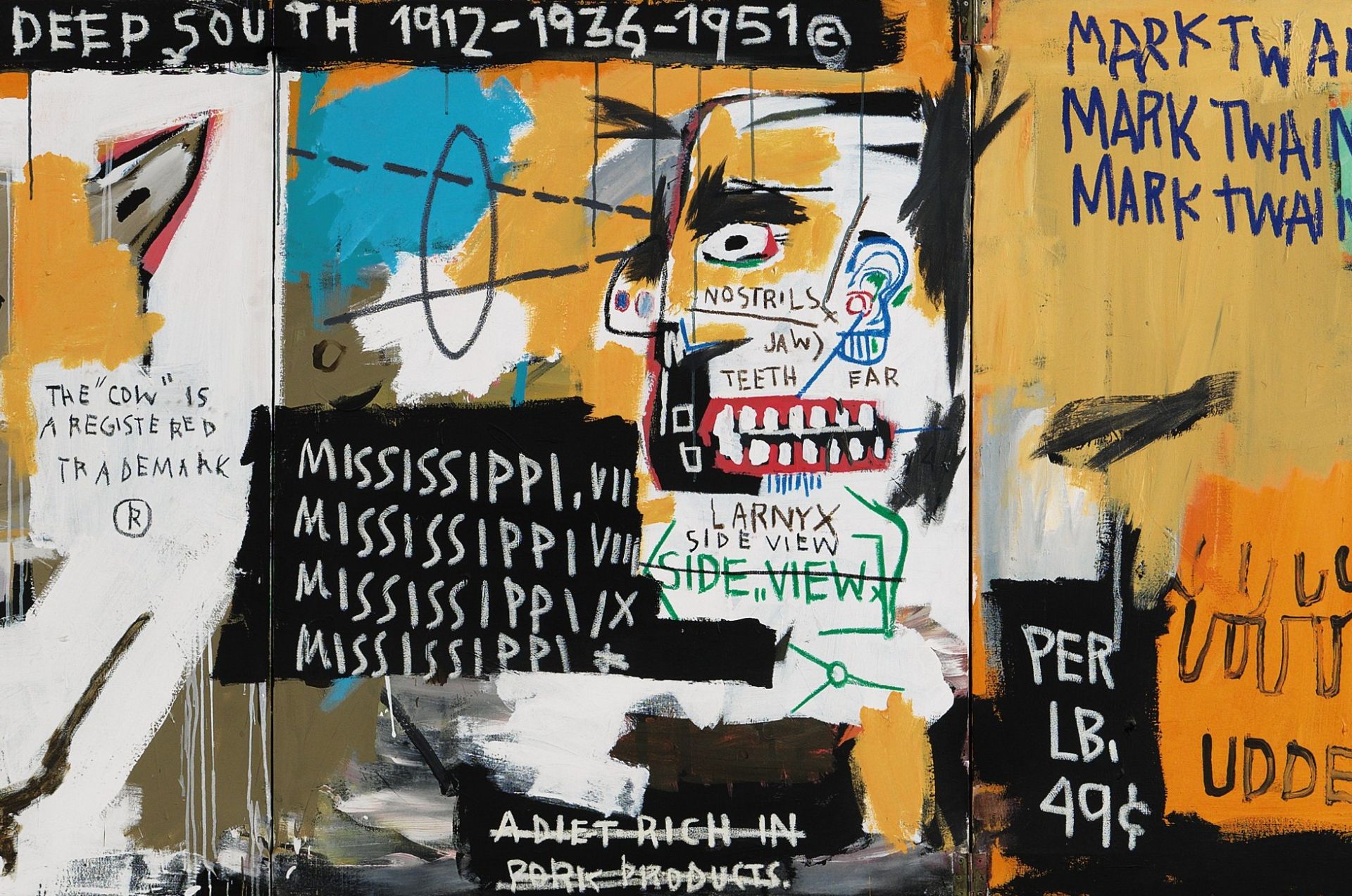 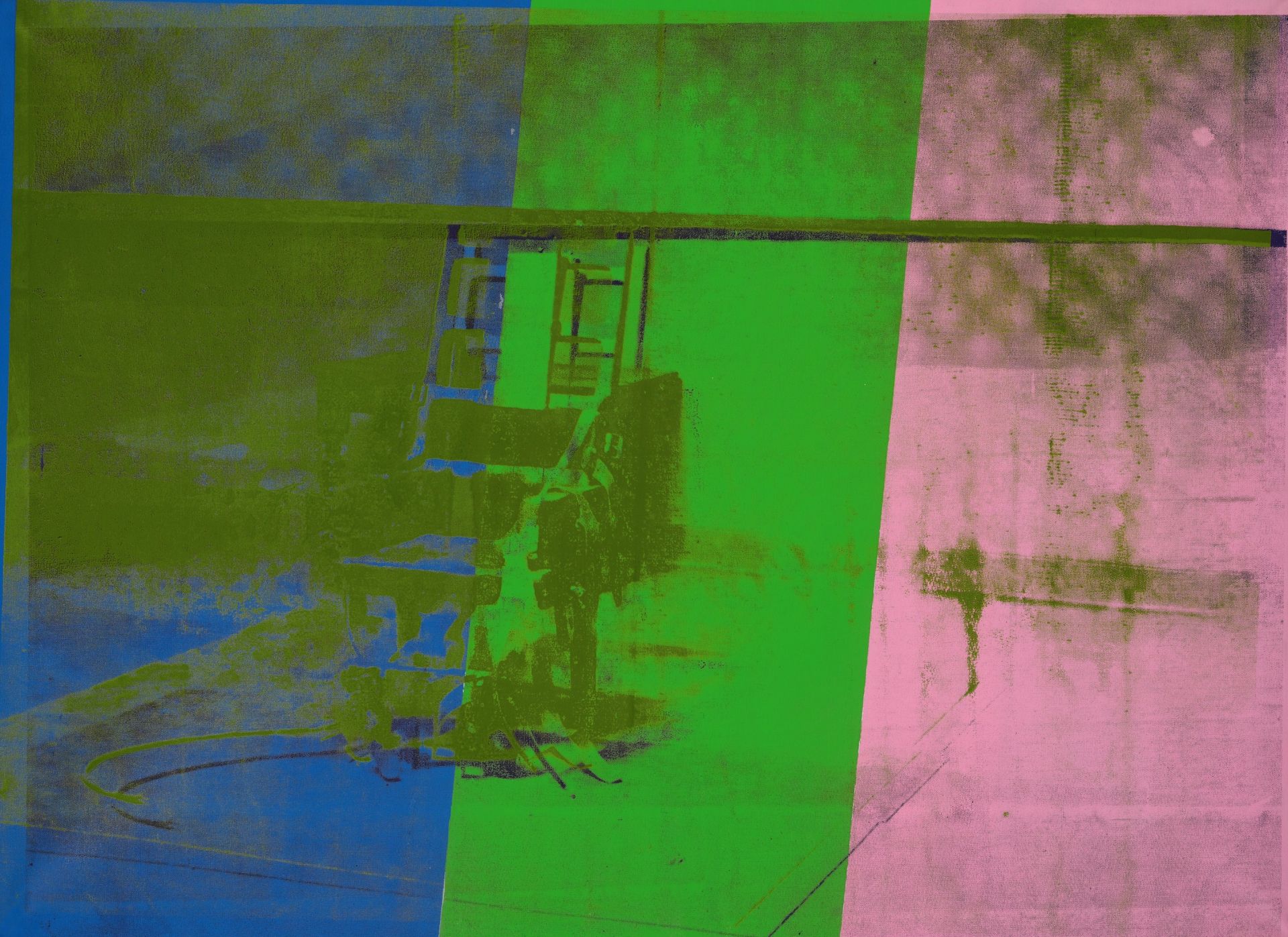 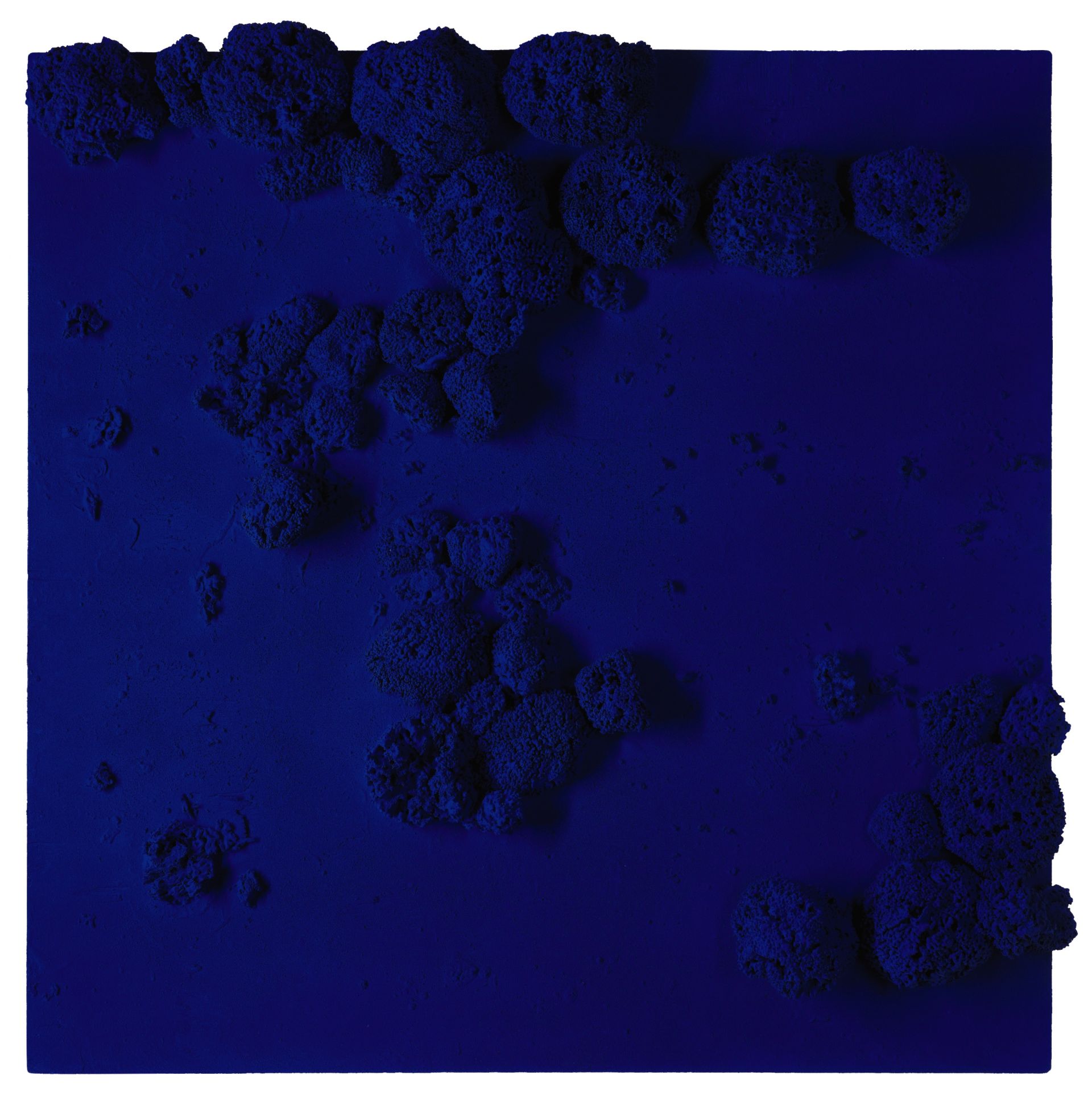 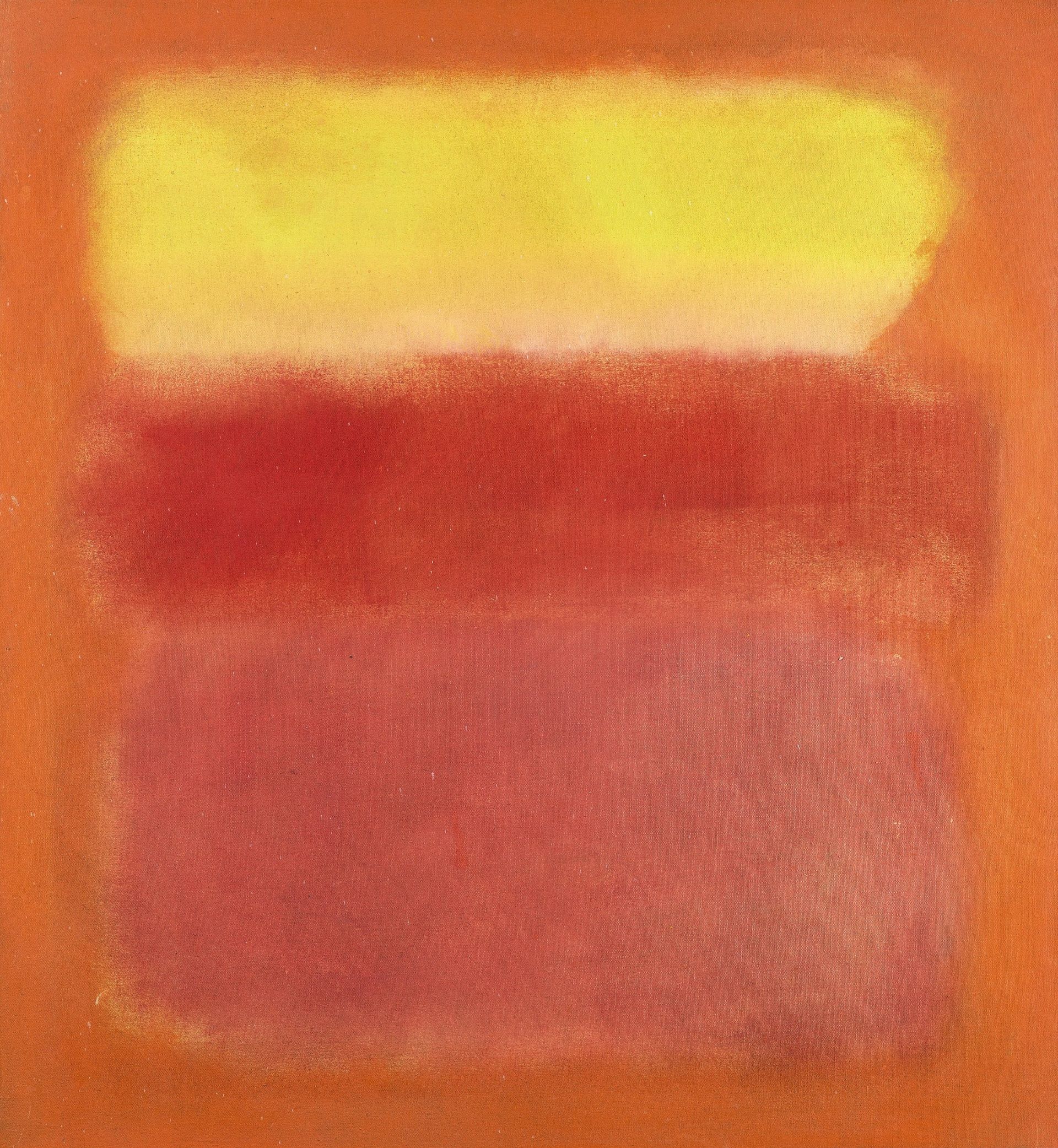 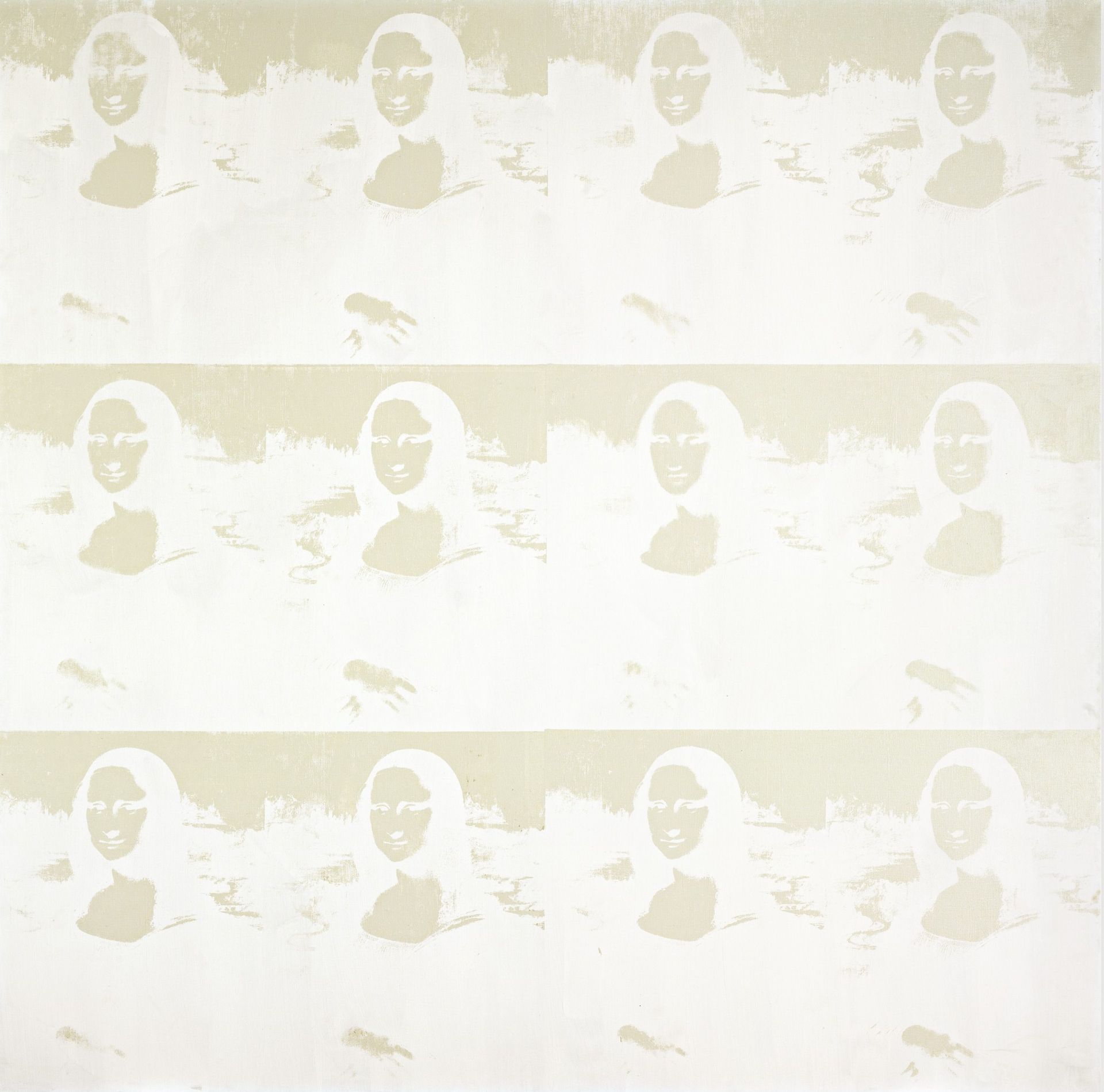 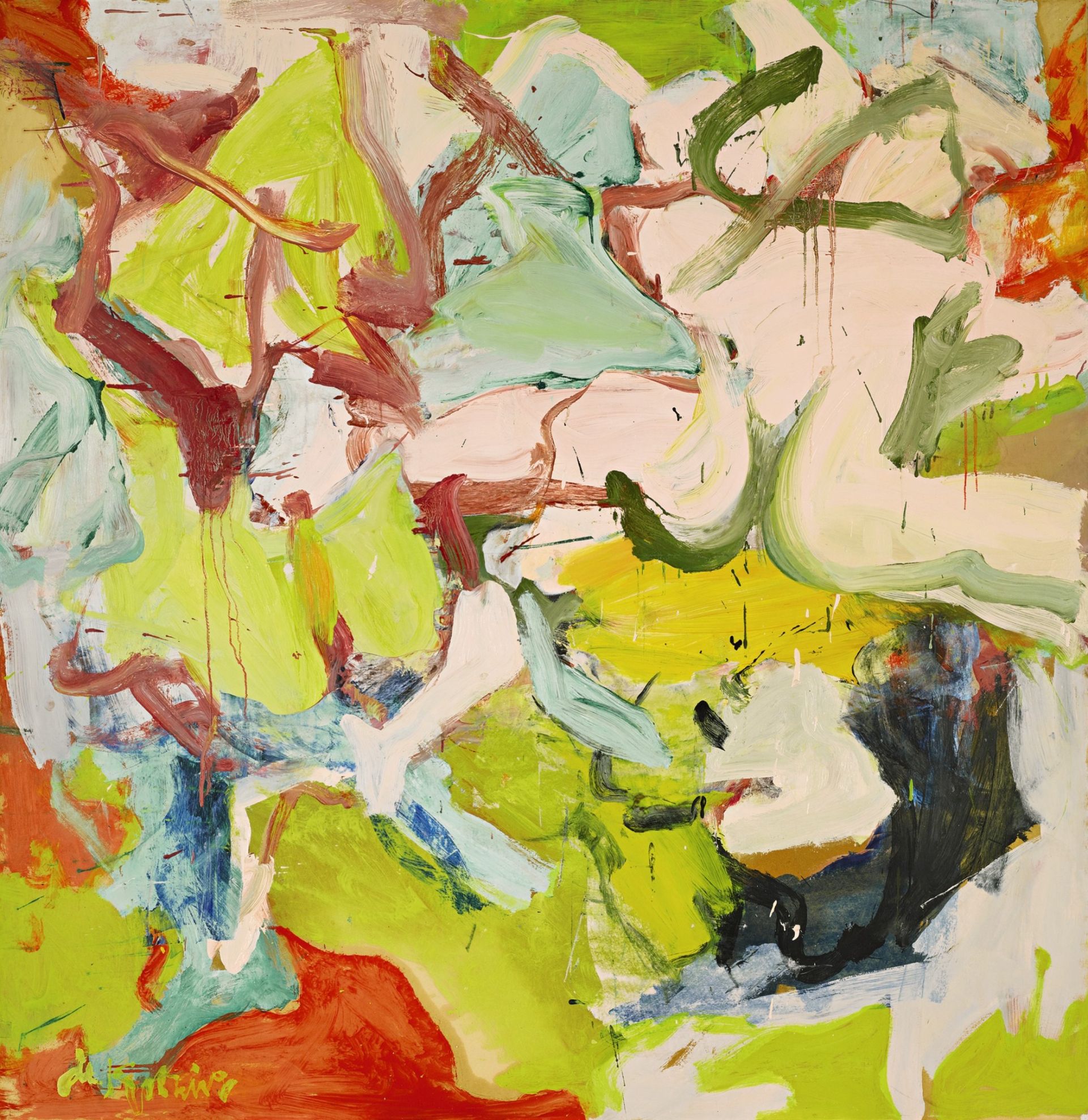 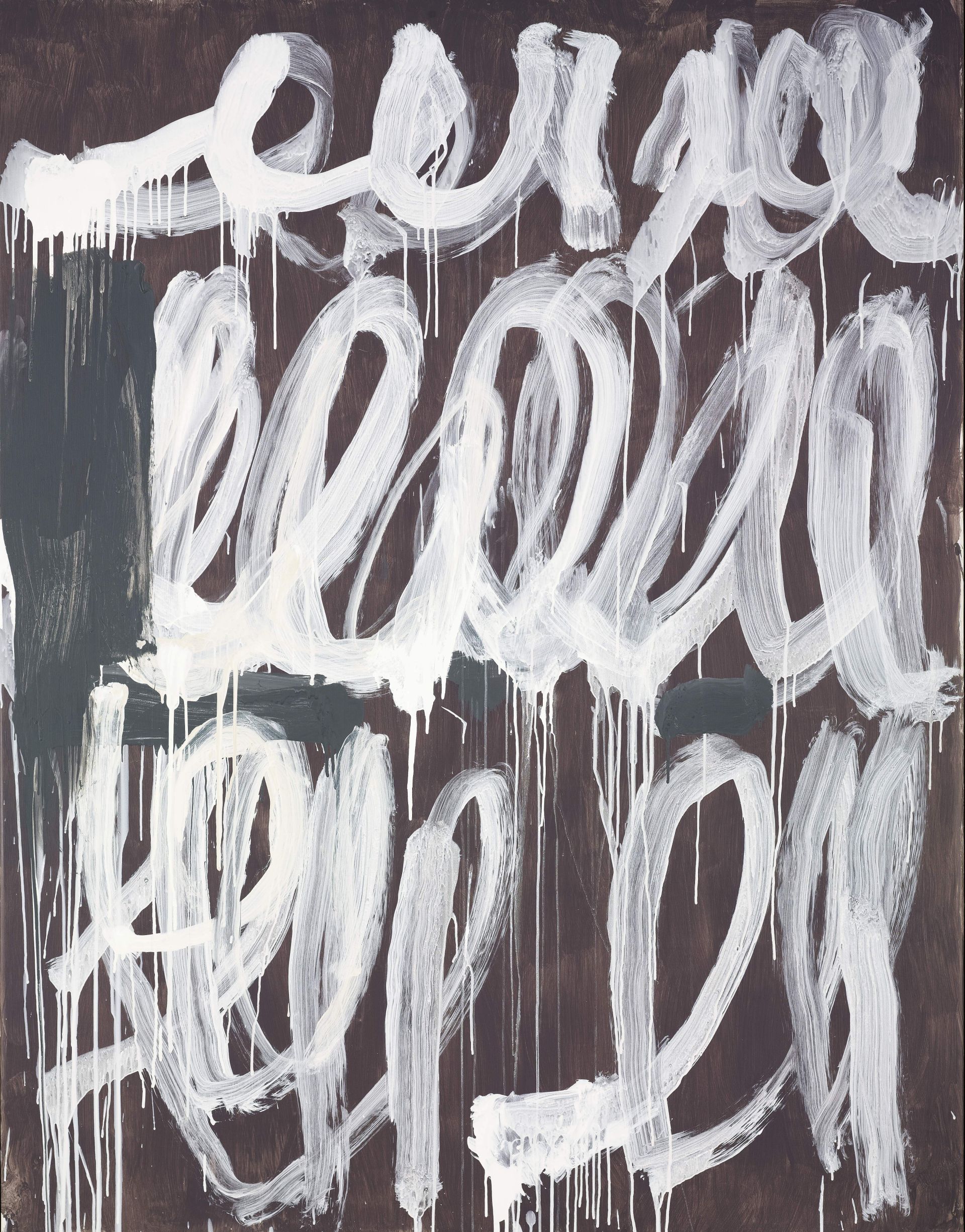 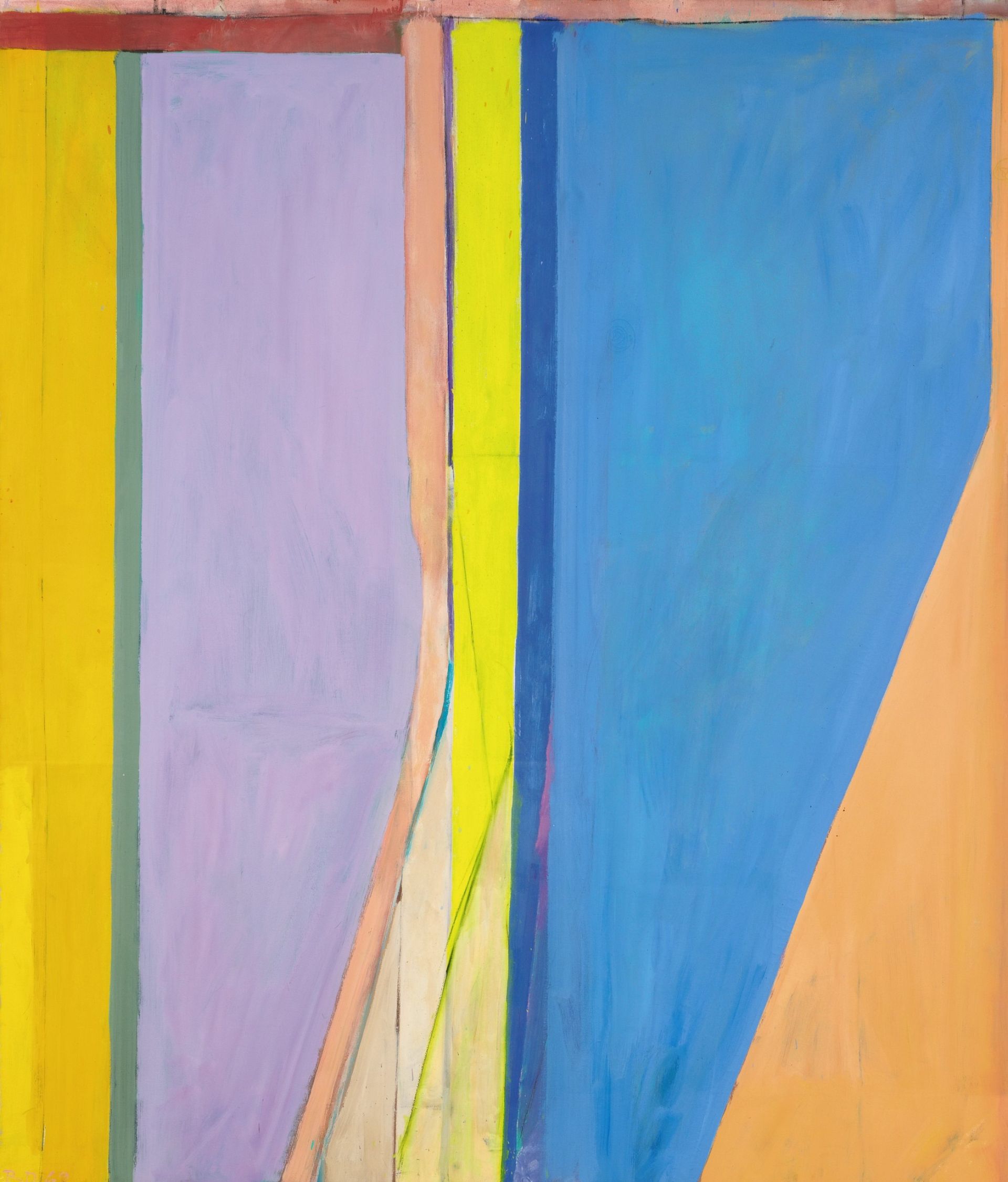 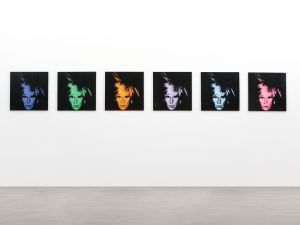 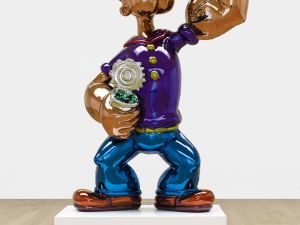 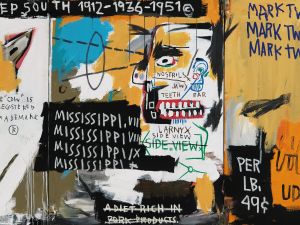 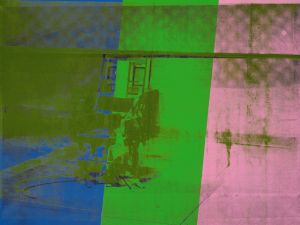 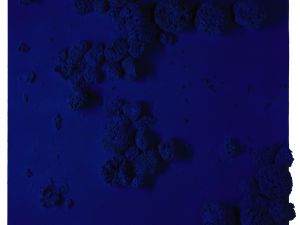 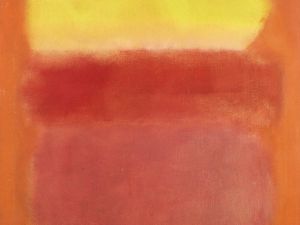 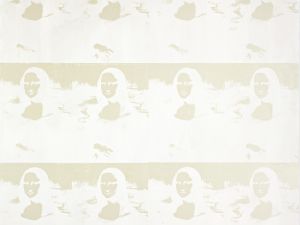 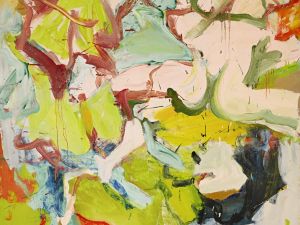 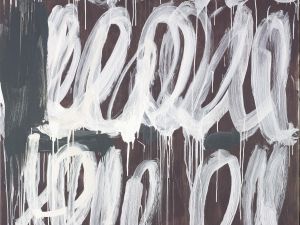 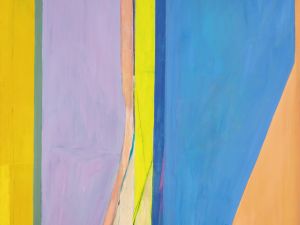 Five of those records were achieved during the first 19 lots of the sale, works from the esteemed contemporary collector Adam Sender—all of those works, like 38 of the total 79 lots, carried a guaranteed minimum, with 3 other lots carrying a special pre-sale bid. Fast-talking auctioneer Oliver Barker took over the rostrum from the recently departed Tobias Meyer, where he offered a contrast to Mr. Meyer’s glacial style and, during the Sender lots, skillfully juggled bids from a hot room.

During those Sender lots, Per Skarstedt and Jeffrey Deitch battled over an untitled Martin Kippenberger, with Mr. Deitch winning it for an above-estimate $4.8 million hammer price. Sukanya Rajaratnam of Robert Mnuchin gallery jumped in on the bidding for a painting by 25-year-old Lucien Smith, which eventually hammered for $190,000. A five minute battle, that culminated in a sale of $4.3 million, ensued between former Sender adviser Todd Levin’s client and the phone for a subtle (for an auction house), record-setting Rosemarie Trockel textile ($4.98 million, with premium). “$300,000!” shouted Alberto Mugrabi on the Adam McEwen graphite fountain sculpture, when it was 100,000 below that, and which was just $29,000 under a record he achieved at Christie’s on Monday (the lot eventually sold for $437,000). “Cool,” Marc Jacobs told his friend sitting next to him, after his friend bought a 1974 Ed Ruscha, She Gets Angry At Him, for $1.75 million.

After the Sender collection, however, the room seemed to grow sleepy, a somewhat tragic development for an auctioneer as speedy as Mr. Barker. When the auctioneer is peppy, two minutes feels like forever, especially when the lot only receives one bidder outside standing orders in the book, as was the case with the cover lot for the evening’s catalogue, Jeff Koons’ Popeye (2009-11), which sold to Sotheby’s specialist Charlie Moffett, bidding for Steve Wynn on the phone, for $25 million at hammer, which was the estimate. (A similarly lengthy two minutes passed when Alex Rotter, Sotheby’s New York co-head of contemporary art, was the only bidder and eventual buyer of Andy Warhol’s 12 Mona Lisas (Reversal Series) (1980) for $10 million, its low estimate). New York Times reporter Carol Vogel sat down with the Rubell family during the two phone bidder, three-minute bidding for the evening’s top lot, Andy Warhol’s Six Self Portraits, which hammered near the low estimate for $26.75 million. She offered the Rubells some gum, and then they talked about the gum.

A sale that began strong suddenly saw Mr. Barker taking $50,000 bids on a Cy Twombly untitled work from 2006, which went for $3.75 million, near its low estimate. A painting by Joan Mitchell failed to sell at $5.75 million, even though a $11.9 million sale at Christie’s record breaking $745 million sale yesterday saw her become the world’s most expensive female artist.

Hers was one of twelve lots that failed to sell. After four lots passed in a row —works by Mark Rothko, Willem de Kooning and Yves Klein— Mr. Barker chuckled at the paddle number for the phone bidder who broke the streak with the purchase of a 1971 Cy Twombly for $2.6 million. “Paddle number double-oh-seven,” he said. “Just what we needed.”

The evening had started high energy enough, with a pre-sale performance at the front of the room by the Paul Taylor Dance Company to mark the the auction’s two Robert Rauschenbergs. Featuring four dancers in garish tights on a large gym mat, the piece blended eroticism and violence and added four and half minutes to the sale. Still, Rauschenberg did not overperform. The first combine sold to Larry Gagosian fo $5 million at hammer and the second to Marc Glimcher, who waved wildly to bid, winning the lot for $360,000 and then indicating that he had no paddle by holding up an invisible one (an earlier Alexander Calder lot saw him raising his arm up tall until the lot reached $1 million, at which point he started shrugging to his neighbors and people across the aisle).

At the press conference Mr. Rotter emphasized the success of the Sender collection and the sale of the Koons Popeye which he said meant it would soon be on display at one of Mr. Wynn’s casinos, “which is gonna be awesome.”

“I read the results, Judd,” he continued, “I’m not pretending I didn’t. We do the best for our consigners and our buyers. We estimate carefully, we sell carefully, but also aggressively. We care for everyone, and that’s just what it is.”