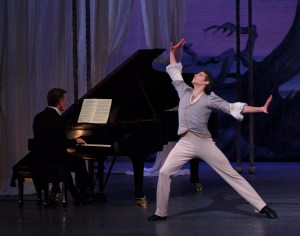 Let’s think about George Balanchine. As with other great geniuses—Shakespeare, say, or Beethoven—there’s always more to think about, and this is a good moment to do so, with ABT as well as City Ballet dancing him this season.

For me, the richest sighting of these past few weeks was the double-bill at the Koch Theater of Robert Schumann’s “Davidsbündlertänze” (back after an unfortunate five-year absence) and Union Jack. As far as I remember, these two astonishingly disparate pieces haven’t appeared together before. Back in 1980, the year the Schumann premiered (only three years before Balanchine’s death), I admired it but didn’t quite get it. Despite its obvious beauties, it took several seasons before it gelled.

Today, the ballet seems Balanchine’s most directly personal. Clearly it’s not autobiographical—unlike Schumann, he was unambiguously sane—but the emotions it discharges as Schumann struggles to maintain his sanity appear to come from deep inside Balanchine himself, as they do in almost none of his other works. Perhaps it was Schumann’s passionate defense of art in the face of the Philistines that inspired him—daringly, almost defiantly, he introduces five black-clad, silhouetted “critics” brandishing threatening giant pens, who help to spur Schumann on to his tragic fate.

Davidsbündlertänze is a profoundly romantic—or, rather, Romantic—work, the searching, passionate music currently (and superbly) played onstage by Cameron Grant. The Rouben Ter-Arutunian pictorial backdrop, an explicit homage to the high Romantic style of David Caspar Friedrich, gives us a violently colored sky over the ruins of a Gothic cathedral submerged in the Rhine. The dances come in short takes, almost all of them duets except for three solos for Schumann, his wife, Clara, and his Muse. The couples dart on, reveal themselves, depart, until at the end, Schumann having slowly retreated to the river in which he will attempt to drown himself, Clara is left alone onstage, mourning. The only Balanchine work seemingly related to this one in period and approach is the Brahms Liebeslieder Walzer, but Liebeslieder is domestic in tone rather than tragic.

In the current revival, the Schumann role, originally danced by the quirky Danish Adam Luders, was taken by Ask la Cour, who had no depth, no inner life. It’s not enough just to be Danish. Second-cast was the young Russell Janzen, far more expressive and convincing. La Cour’s callowness was emphasized by the Clara of the more mature and turbulent Sara Mearns; she was so agitated in the opening scenes that at times it was Clara herself who seemed on the brink of emotional disorder. Maria Kowroski gave her usual beautiful Farrellesque performance in the Muse role, lacking only the ultimate genius that was Farrell’s alone. Unusually, the second cast—all eight dancers new to the ballet, and an indication of just how deep City Ballet is right now—was on the whole stronger than the first, and not just due to Janzen. Tiler Peck as the third girl was so brilliant that for the first time in the ballet’s history, this role became central. Rebecca Krohn, a beauty in the Farrell mold, was highly effective, and Ashley Laracey was as always musical and appealing. Janzen’s Clara was Teresa Reichlen, a big stretch for her, but a tantalizing one. We think of her as both a gorgeous showgirl and a model of technique; with experience, she may become a fine dramatic dancer as well.

The Schumann has finally become a hit—at the two performances I attended, the audience was almost raucous in its appreciation. Balanchine would not have been surprised at this delayed success; he took the long view.

You could not get further from this tormented drama than with Union Jack, Balanchine’s Bicentennial tribute to the British. It opens with the hypnotic marching of seven regiments, 10 dancers each, all in kilts. On and on it goes, wonderfully particularized, magnificently organized—70 dancers in perfect sync. Then, the hilarious “Costermonger Pas de Deux,” donkey and all—yet another example of Balanchine’s masking the classical pas de deux form with a popular-culture veneer. Finally, the rollicking Royal Navy section, where the gobs are both guys and gals, climaxed by the whole company semaphoring “God Save the Queen” while the orchestra blares “Rule Britannia” and cannons roar. Talk about over the top! Union Jack was an instant hit for City Ballet; the Brits hated it. But the crucial point here is the impossibly vast chasm between it and the Schumann. Can one man have created them both? And that’s without considering his “modern” pieces, beginning with The Four Temperaments. Oh, yes, there are the great narrative works, too, from Prodigal Son to Midsummer Night’s Dream. And so much more.

City Ballet also gave us Walpurgisnacht Ballet, a rather silly but enjoyable French romp with rushing lines of girls, hair loosely flying, and a dynamic central role which is one of Mearns’ strongest creations—her unmediated, boundless energy and commitment are just what’s wanted. I appreciate her less in the “Diamonds” section of Jewels—she dances it lovingly, but I don’t find the expansive grandeur of Farrell and others who succeeded her. Part of the problem may be the limitations of her physique. Her most telling moments were those that echo Swan Lake, her finest role. The rest of Jewels had its ups and downs. The ups were primarily in “Emeralds,” provided not only by Ashley Bouder in the sublime Violette Verdy role but also by a newly animated Abi Stafford and a newly elegant Amar Ramasar. “Emeralds” remains for me the most subtle and moving section of Jewels, its ravishing Fauré score sounding more beautiful than ever under a new conductor, Koen Kessel. As for that audience favorite, “Rubies,” the combination of Sterling Hyltin and Andrew Veyette just didn’t work. They’re both terrific dancers, but there’s nothing between them onstage—no gleeful affection and complicity. She’s charming and he’s got the moves, but their “Rubies” is a workout rather than a thrill. Come on, Peter, bring in Villella and McBride to show them what it’s about! No one needs to show Reichlen, as the tall girl, what it’s about. She’s perfect.

Meanwhile, ABT was dancing two Balanchineson one program. First was Theme and Variations, made on the company back in 1947. The stars were Igor Youskevitch and Alicia Alonso, both powerhouses. This season, I saw Sarah Lane, a very capable petite dancer with the right ideas but lacking amplitude, and opposite her, in place of an injured Herman Cornejo, the petite Daniil Simkin, so poorly miscast that someone should have alerted the ASPCB—the American Society for Prevention of Cruelty to Balanchine. Let us not dwell on this travesty. At another performance, the very talented Isabella Boylston and Andrew Veyette, on loan from City Ballet, did a convincing if not spectacular job. Theme, however, Balanchine’s glorious tribute to the high classicism of the 19th century, is a ballet that calls for greatness.

His Duo Concertant, though, does not. Originally created for the Stravinsky Festival of 1972, it was an immediate success. The pianist and violinist are onstage, and the dancers listen to them respectfully and respond joyously. Both casts pulled it off: Misty Copeland, at last being offered large opportunities, full of zest and pliancy, opposite Eric Tamm, another underemployed talent; and the veteran Paloma Herrera, relaxed in her comfort zone, opposite the increasingly useful James Whiteside. Best of all was the violinist, Benjamin Bowman.

Duo came along 25 years after Theme, which was in turn born almost 20 years after Balanchine’s first masterpiece, Apollo. And there was another decade of achievement to come.