After last week’s big gay-la —where Amy came out to her mother live on local news (where all the action really happens) — the fake couple is out and, well, out. While friends would just be kicking on the lawn, as a couple, they are clearly canoodling on a blanket in the grass. Karma is working on a song, because apparently she has talents beyond lying and narcissism. She won’t sing it for Amy, though despite Amy’s protestations, “I’m JT and you’re Timbaland and we workshop until they are dope!” (Never forget: this show airs on MTV). Moved by Amy’s devoted friendship, Karma leans in for a kiss when there is no one around to witness their act of gayness. Amy is pleasantly surprised that Karma is kissing her, on the mouth, with no audience, but then Karma ruins it by snapping a selfie and posting it to Instagram and bragging about all her new gay-friendly voyeuristic followers including, of course, Liam.

Amy, like the rest of us, doesn’t quite grasp how continuing their fake gay relationship will make the douchey boy of Karma’s dreams fall in love with her, since she is ostensibly into women. So in the helpful way of sitcoms, Karma spells it out for the viewing audience: Liam is allergic to commitment. (Aren’t most high school boys?) As a lesbian with a girlfriend she’s “hypoallergenic”. Amy points out that true love should be based on reality, not a fantasy and …oh man, what if this entire show is actually a cross-promotional stunt for CATFISH.

While Amy argues for honesty, Karma can’t help but throw in the standard teen fare of a low self-esteem argument. “I’ve been myself for 15 years and no one has fallen in love with me!” she said with a verbal frowny face emoticon, before quickly adding,” except for you!” and tweaking Amy’s nose. Amy grimaces but, hey, this is her BFF. At long last, Karma finally realizes that Amy is a human being with feelings, “I worry that you’re not getting anything out of this.” Amy shrugs, bcause at least she gets to make her parents uncomfortable. To make it seem like she is still game for the charade, Amy spitballs, “Maybe I should get a secret boyfriend too? They sound fun!” Karma jumps on the idea like it’s Liam in the art room, but a protest interrupts their scheming. Turns out that a search engine is trying to make a donation to their financially failing school, plus all the students get smartphones and tablets. The only cost? Their online privacy as all the data that goes through the devices will belong to the search engine. Obviously this is too much for the high-minded Hester High students who launch into a school-wide protest.

The frontrunner for Amy’s secret boyfriend is Josh, a guy she had a crush on in middle school. He is leading the protest alongside Liam, who is already wearing an Occupy Hester High t-shirt. Since Karma is going full protest — just to woo Liam with her lefty leanings — Amy is too. “Down with corporate tyranny!” Amy half-heartedly shouts into the halls to raucous applause.

Obviously, prom-queen-in-her-heart Lauren is opposed to the protest. She grouses to her groupies, but isn’t entitled to much more screen time this week.

Just as Liam romantically gives Karma a too small Occupy Hester High t-shirt on purpose, Soleil shows up. Soleil is a striking brunette student who is rarely on campus because her classes are independent study, but the mere whiff of a protest is enough to bring her back to campus …and Liam. As Liam and Soleil swap protest war stories, Karma blurts, “I’m a lesbian!” as a desperate move to win points. Soleil purrs, “Good for you,” as she and Liam head off to make out in a closet. Shane appears just in time to explain to Karma that Liam and Soleil have what he calls a “promance” — a protest romance. It happens every time they shut the school down. Karma is probably regretting her decision to not hook up in the back of his dad’s car last week.

Outside Amy sees Josh playing a mouth harp in a circle of dancers and obviously: Crush. Over. As she glowers at the circle of dancing dorks she meets a guy who shares her interests in hate watching. His name is Oliver and he knows that she has a girlfriend. A girlfriend who just happens to be chaining herself to the front door of the high school. Amy goes to investigate it, but it’s just another of Karma’s ploys to get Liam’s attention.

It works, too, until Soleil arrives with donated food from a vegan bakery, Karma calls for a hunger strike.

Amy splits the scene with Oliver while Liam and Karma make googly eyes over each other until Soleil cockblocks them again by suggesting they host an open mic to avoid the school turning all Hunger Games as the blood sugar drops.

Oliver takes Amy to his secret lair in the school where he watches the students via surveillance equipment.  Amy does not view this as a giant flashing warning sign, but instead laughs, “You do realize the irony of spying on students protesting an invasion of privacy, right?” He does, he does.

Over at the open mic, Soleil does some slam poetry to woo Liam, because obviously that’s what lefty students do. As she leaves the stage, she and Liam swap some double entendres, but before they can seal the deal in the supply closet, Karma takes the stage with her guitar. She’s never performed in public before, but if it will get Liam’s attention, why not.

Meanwhile things are heating up in Oliver’s lair and Oliver almost kisses Amy before remembering she’s gay. Amy is about to explain it all, but she sees Karma singing in public and rushes out to watch first hand. As Karma sings a love song she wrote, she winks at Amy, but makes eyes at Liam and Shane sees it. Amy does NOT approve of Karma’s blatant ogling, especially paired with the love song’s lyrics and her real feelings for Karma. She can’t handle it and rushes out of the room. That’s when Lauren breaks up the hunger strike with a well-timed pizza delivery. The protest is ended over pepperoni.

Amy apologizes and runs off. With all the running she’s been doing, maybe she should try out for track?

Out in the parking lot, Karma sees Liam saying a quick goodbye to Soleil, which is not a euphemism. Just as Karma is about to make her move, a town car pulls up and the smoking hottresss of a search engine exec steps out of the car, eyeballs Liam and orders the jailbait into her car. Because that is a thing that happens. Karma’s personality disorder does not know how to process this.

Later, as Amy is getting ready for bed, Shane comes over to break the news to her that something is going on between Liam and Karma. Amy tries to feign surprise, but cracks under all the pressure and confesses to Shane that they are faking it. Or at least, Karma is faking it, but she’s not so sure that she is. Shane calmly tells her, “You have my attention.” 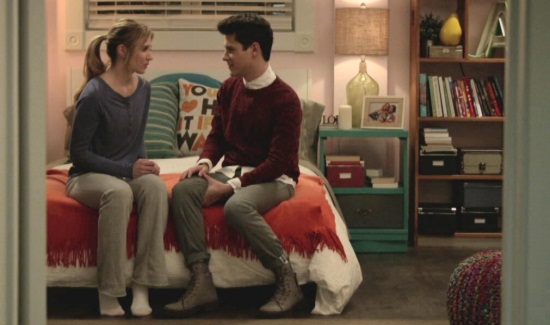