Ever since they started fake dating, Amy and Karma haven’t spent much quality time together, so Karma suggests a girls weekend complete with transfat-laden frosting and The Twilight Saga.

Amy is up for special Karma time, but her mother’s bridal shower is the next day and she has to be there for it. While a bridal shower seems like something a BFF and/or fake girlfriend would know about, Karma had no clue but invites herself along for the fun.

Amy goes to tell her mom (whose name is apparently Farrah) about the new addition to the festivities and finds her and evil soon-to-be step-sister Lauren waist deep in gift bags, seating charts and flower arrangements. Amy — who it turns out may be as self-involved as Karma — had no clue that Lauren had taken over arranging the bridal shower and whines that she could have helped, if, you know, she had realized that organizing a bridal shower takes work. Lauren tells her not to worry about it, because she has it all under control. She gives Farrah a big old hug, gives Amy a secret evil wink and announces her plans to go to Dallas to pick up a croquembouche for the party from the best. Apparently towering cream puff and chocolate creations are all the rage at bridal showers these days. Amy, desperate to pretend to be a useful human being insists that she and Karma will come along for the ride to Dallas. As Lauren protests, Farrah smiles that she’s so happy they are coming together as sisters.

In the car, Amy knows that Lauren is sucking up to her mom to make her jealous, but Lauren scoffs that she doesn’t need schemes to make her jealous, “just a mirror.” Zing!  Dallas never seemed so far. They say “croquembouche” about two thousand more times before Lauren smirkingly tells Amy that Farrah made her the made of honor. That one stings. Amy pouts all the way back to Austin. When she confronts her mom, Farrah says that she thought she was doing her a favor since she doesn’t “like all that girly stuff and Lauren does.” While Amy blinks back tears, Karma rushes in with a boombox all John Cusack style and blare ” …There’s no need to argue, parents just don’t understand.” At least they’ll always have DJ Jazzy Jeff and the Fresh Prince …and each other.

Liam is looking for a way to kill 20 minutes, so he calls up Shane and suggests they go to the gay bar, because the straight women who go to gay bars are always fresh off a breakup. It’s funny, because it’s true. While Liam targets easy prey, Shane strikes out.

He untangles himself from that dud with the best rejection line: “I just realized my parents are getting divorced and I know longer believe in love. Goodbye.” Shane is over the scene and wants to leave, everything changes when some glowing Aryan twins show up, like the Dollengangers were let out of the attic for a quick fling at the gay bar.

At the bridal shower, Amy throws a temper tantrum for the ages when Lauren’s thoughtful and possibly expensive present to Farrah overshadows Amy’s handmade mixtape. (She should have included a coupon for a back massage!) Amy decides to out Lauren as an evil schemer who is just being nice to Farrah to tick off Amy. It goes about as well as you would expect. Karma tries to reign her girl in, while all the grownups in the room clutching their pearls and tsk tsking at the teenage angst in action. Amy yells, Lauren yells, the only outcome is: CROQUEMBOUCHE FIGHT.

Then they both get sent to their rooms.

Later as the girls try to clean croquembouche filling out of their hair (which will be a great screengrab for brazzers.com), Lauren admits that, for real, Farrah is her best friend in Austin and stomps out of the bathroom Marsha Brady-style. Amy looks abashed, a look that continues when her mother comes in to chide her for ruining her special weekend. Farrah asks Amy if she is acting out as payback, because she is having a hard time accepting her sexuality. Amy doesn’t know what to say to that and, honestly, what teenager would. Amy’s face falls even further when her mom says she doesn’t even know who she is anymore.

Speaking of not understanding someone, Shane does not get what is going on with Liam. Sure he’s a known horndog, but his desire to hook up almost got them arrested for underage drinking. What gives? Turns out that Liam is having actual * shudder * feelings for someone and he wanted to wash those nasty little buggers away with a roll in the hay with someone new. It takes Shane 2.5 seconds to deduce that it’s Karma.

As Shane talks some sense into his fool friend, Liam eventually realizes that he has to call things off with Karma because he can’t enable her cheating on Amy. Her fake girlfriend.

Karma does an admirable job comforting Amy, reminding her to not worry about what her mom thinks, because she is her family and they will be each others’ maids of honor and grow old and be happy together.

Amy thanks her and gives her a big hug and finally lets her talk about Liam. Like a good girlfriend. 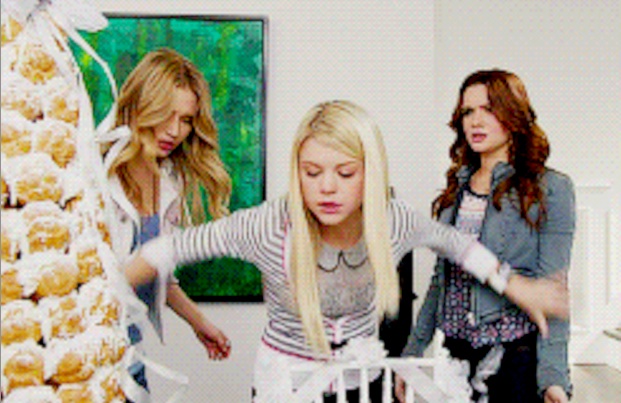