Her response to Karma’s kasual suggestion was a very appropriate: F— NO!

Having some doubts about her decision, Amy ran to Obi Wan Shane for advice. He tells her to go for it because totally straight girls don’t just casually suggest three ways with their BFFs, unless they are having doubts about their sexuality too. He dubs Karma’s suggestion a Bisexual Batsignal and tells Amy to go for it and if she doesn’t want to touch skanky old Liam, she doesn’t have to. How does Shane have so much intimate knowledge about threesomes? Because at theater camp he “fiddled more than just the roof.” Has he earned his Gay Best Friend merit badge yet? Amy tells Karma she’ll do it and Karma promises it won’t be weird at all. That may be the biggest lie Karma has ever told.

Meanwhile in Lauren’s subplot du jour, she has transformed Shane’s yoga room into a dance studio to rehearse for a city-wide dance competition. When he tells her to remove her bigoted behind out of his personal space, she tells him she’s not anti-gay, just anti-him. It’s all just foreplay, though, because the second Lauren’s out-and-proud dance partner shows up to rehearsal with a broken foot, a chiseled jaw and a painted-on school uniform, Shane jumps at the chance to show the man his moves even if it means hanging out with Lauren.

When Amy and Karma tells Liam the Good News, he passes through the five stages of threesomes: Disbelief, Panic, Assuring Them That’s He’s Not A “Hetero-normative Jerk Who Will Brag To His Friends”, More Panic and, finally, Scheduling. Amy and Karma assure him that lesbians never joke about threesomes. Liam promises to bring the condoms, but when he goes to pick them up from the nurses’ office, he inadvertently announces the plan to some bros, who decide to help devise a master plan.

Shane is doing his best Maks Chmerkoskiy impression in order to woo Pablo, the dance master. Their shared love of GOOP may be enough to get Shane past the fact that Pablo is an honor student Our Lady of Perpetual Chastity who loves Jesus and Lauren in that order. When Lauren glares that he and Pablo will never happen, Shane accuses her of being afraid of losing her best gay friend to her best gay enemy.

All this rehearsing, means he misses the panicked phone calls from Liam and Amy desperate for advice.

Meanwhile, Liam is getting some motel room staging advice and a pep talk from his bros. But there’s no pep talk that can properly prepare him for Karma’s konniving and Amy’s Agent Provacateur reveal.

Amy gets the party started, stripping to her skivvies and then kissing Karma, according to plan.

Karma can’t kope with Amy’s interest in her (or maybe she can’t handler her own feelings for Amy) and when Liam tries to join the party and kisses Amy, Karma panics and runs. As the bumper sticker says, karma’s a bitch. 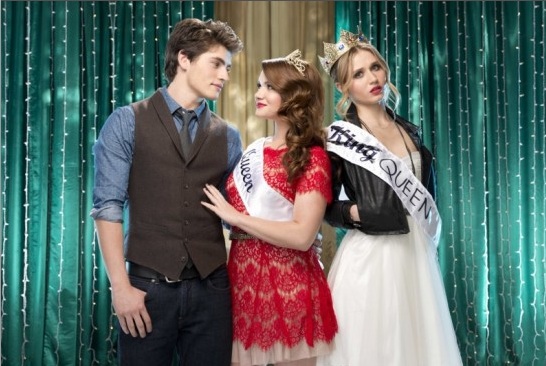