When we last saw Amy she had jogged out the front door of school to get away from Oliver, the boy she kissed, and Karma, who she wants to kiss (even though, she can kiss her as her fake girlfriend, but she wants to really kiss her and basically Amy and Karma are the reason Mark Zuckerberg made an “It’s Complicated” relationship status on Facebook.)

Amy finally reached the tipping point and told Shane about her real feelings for her fake girlfriend and now they are Team Shamy, minus the shame.

Amy has been ditching Karma’s phone calls for “12 hours and 32 minutes,” which is 10 minutes longer than when Amy got her tonsils out and yet Karma still hasn’t gotten a clue. Karma does manage to squeak out an apology though and admits that she was wrong about Liam and she’s sorry.

Oliver made Amy a paper crane, but the second she sees him, she flips out and goes running off to find her new one-man support system (Shane) and begs him to help her find a new girlfriend. She thinks that if she can find a new girlfriend, she will get over Karma and life will be worth living again. Shane rolls his eyes and just goes with it. Check the track team maybe, Amy?

Meanwhile Karma’s embarrassing and oblivious parents have rolled their organic juice food truck onto campus. It’s called “Good Karma,” naturally. When they threaten to display a life-size photo of her in a kale suit, Karma attempts to have her parents arrested for Attempted Embarrassment of a Teenager, but when they confess that they need the money, she lets them agree to stay on campus before stomping off at the sight of Liam, who she hasn’t forgiven for hooking up with the smokin’ hotress of a search engine exec last week. Karma’s mom apologizes for the rude behavior and gives him a free shot of juice and an extra-long Omega hug.

In today’s mandatory Lauren subplot, she sent her boyfriend a sext of her in her bra and he deleted the picture, because he knew she wouldn’t want that getting around. Twist: She wanted the picture to go viral!

Team Shamy is skipping school so Amy can play The Dating Game at a local coffeeshop/gay bar. Unfortunately, Amy is completely hopeless at picking up chicks or acting like a human in public, apparently and after a few awkward misfires she gives up.  Shane, the gay Obi-wan of the group, tells his young Padawan lesbian that women like to bond and nest and fall in love and let themselves go.”

Realizing that Amy is hopeless in public, he introduces her to an app called Syzzr and uploads her profile.

Karma’s apparently non-medicated mood swings mean that she has changed her mind about helping her parents, but when she arrives at the food truck she sees that Liam beat her to the punch. He’s even wearing the kale suit and clearing dishes for her parents’ customers. How dare he?  When Karma orders him out, her parents dole out more Omega hugs, his share of the tips and a compliment, comparing him to Karma’s older brother who is full of integrity. That is too much for Karma who blurts out that she saw him leave with the Skorkle exec and knows he hooked up with her. Liam confesses that eh didn’t sleep with her, but only because she’s his sister. Biggest reveal since Star Wars, right?

Meanwhile, Amy already has a date thanks to the Tinder knock-off and she weirdly leaves Shane in her room until she gets back. Obviously he has nothing better to do but wander into Lauren’s pathetic plotline and catches her topless and mid-selfie sext. Obviously he starts art directing the photo shoot.

Needless to say, Amy’s date is awkward, even though the chick, Jasmine, is cool.

It ends with Amy going for yet another jog, this time from the coffeeshop.

Back at the high school, Karma tracks down Liam to apologize for thinking he sporked his sister. He admits that his father is actually the founder of the giant search engine, a fact he perplexingly keeps a secret. Apparently being fabulously wealthy is a no-no at Hester High. Karma manages to avoid making visible thought bubbles of Hermes bags and Harry Winston jewels appear over her head and instead tells him that she’s here for him if he ever needs to talk. She then confesses that she is worried that her parents think her sexual orientation is the most interesting thing about her. Liam assures her it’s not. And because teenage girls are suckers for compliments, that is enough to get Karma to make out with him again.  But Liam can’t do it. Is this a good place to make a Karma’s a bitch joke?

Amy comes back from her date defeated. She tells Shane that she has realized she doesn’t want to meet a boy or a girl she only wants to date Karma and only Karma. Shane dubs her a Karma sexual and points out that Karma is kind of into her too.

That’s when he ducks out so Amy can finally call Karma back. 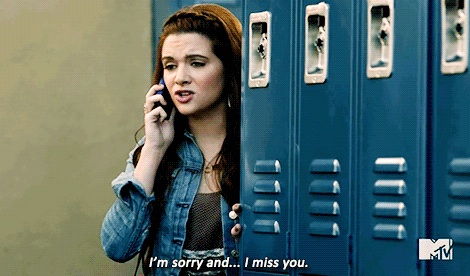