In my experience, people who can’t eat gluten stick together. One evening in my senior year of college, I bonded with girl at a party after we proclaimed ourselves gluten-free.

However, sometime deep in the night, I watched her arm swing drunkenly through the air and plunge into a bowl of pretzels. I lunged across the table and grabbed her, rescuing her from a night of intestinal agony, or worse.

I get angry when I remember what happened next: the girl shoving a pretzel in her mouth, giggling, “I’m not gluten-free when I’m drunk!”

I have a strong intolerance to gluten. I can usually handle a little cross-contamination with a drop of soy sauce, but eating a whole bread roll can send me on a gastrointestinal adventure, and also set me up with a really attractive skin rash.

Yet I love gluten, so dearly that every once in a while I decide Screw it! I’m having the gnocchi! And spend two weeks looking like I’ve been attacked by killer bees.

Some people discover they are unable to eat gluten as kids. Cruelly, my allergy did not kick in until college, giving me 18 blissful years to discover how much I love carbs. I still nurse memories of the hot, doughy bagels sprinkled with tiny salt crystals that my dad and I used to share at our local Jewish deli in Toronto, savory slices of pizza at the end of a night out with friends, and cakes and cookies that don’t taste like cardboard.

So it makes me crazy when people without gluten allergies choose to eliminate such things from their diet. If you’re lucky enough to be able to eat a muffin and not find yourself in gastrointestinal hell, you should probably just eat the damned muffin.

I often share these feelings with my “gluten-free” coworker, who’s gluten-free except on pizza Tuesdays. I told her I was going to pitch a story on people like her, a rant where I voiced my pent-up frustration.

But that wasn’t the story, she told me. “Why do you care what other people do to be healthy?” she asked. “Why do you hate them so much?”

She was right. It enrages me when people follow diets I don’t, and I’m not exactly sure why.

You would think the world’s ever-growing gluten-free community would be able to come together in joint pursuit of edible baked goods that don’t taste like sawdust. But that’s not the case.

Erin Smith was diagnosed with celiac disease in the 1980s, when she was two. She runs two blogs, “Gluten-Free Fun” and “Gluten-Free Globetrotter,” and is the lead organizer of the NYC Celiac Disease Meetup group.

At a vendor fair last year, Ms. Smith met a baker who was marketing gluten-free cupcakes made with oat flour. Insisting they were celiac-friendly, the baker tried to get Ms. Smith to eat a cupcake, but Ms. Smith resisted because, unusually for celiac sufferers, she’s also intolerant to oats.

When the baker found out, she refused to speak to her.

“I find it interesting how people, especially those who already have a dietary restriction, openly judge others when they’re verbal about what they can and cannot eat,” Ms. Smith said.

The gluten-free community can in fact be viciously competitive: Everyone believes they’ve found
the remedy and tries to prove the superiority of their digestive health routine.

“People are sick for so long — it takes eleven years on average to get a diagnosis of celiac disease,” Ms. Smith said. “So I think people, when they finally find a solution, want to preach it to everyone.”

But what about the French fries?

Fries don’t have gluten, but serious gluten avoiders usually steer clear of them because of the potential for cross-contamination in the oil vats where breaded items might have been cooked. Ms. Smith went for the fries a few years ago at lunch with a fellow gluten-free friend.

“You cheat, and you’re not really gluten free!” the friend snapped.

“She still brings this up,” Ms. Smith recalled, “like she’s more gluten-free than I am. I don’t know if it’s a jealousy thing, but it’s almost like ‘I’m better than you’ because I don’t eat French fries. I just talked to her the other day, and she brought it up again, and I was like Really? That was five years ago. Let it go.”

Ms. Smith and I agreed that her French fry friend had been irrational — it’s wrong to judge people for their food choices. People should eat whatever the hell they want to eat.

Then we agreed how infuriating it is when people go gluten-free as a way to get the perfect bikini bod.

There was a time when the Daily Mail’s head of social media and emerging platforms was more open about her dietary choices, listing them when she filled out an OkCupid profile, for example.

“I literally didn’t get any messages for two weeks,” Ms. Lorenz said. “I got normal weird creep-o messages from old men in the Bronx, and then people venting about how I am destroying my body… Like it’s an affront to the fact that they like bacon.”

The same anti-vegan hatred reared its head when she went on dates.

“I went out with one guy,” Ms. Lorenz said, “and when I got back from the bathroom he was trying to sneak cheese into the sandwich I ordered.”

It’s not just bacon lovers who give her a hard time. As in Ms. Smith’s case, the worst judges can be fellow vegans, such as the branch that rejects even imitation animal products, or the vegan friend who visited Ms. Lorenz’s apartment and chastised her for drinking red wine that had been processed with a fish bladder (or so she claimed.)

“It’s like when you move into a nice community and think, I’ve finally made it,” Ms. Lorenz said. “And now that I’m there, and I live in the shittiest apartment on the block. That’s how I feel as a vegan half the time.”

Yet as much as New Yorkers argue over whose diet is the most restrictive, nobody, as far as Ms. Lorenz can tell, has actually transcended food — not the “raw vegans” who barely eat anything but plants, not even the juice cleanse advocates who never eat solid food. (“Then you’re just a juice head, and you’re crazy because you never eat solid food and you’re probably fucking up your intestines,” Ms. Lorenz pointed out.)

There’s no “one highest way to eat,” as Ms. Lorenz put it. But New Yorkers love fighting their way to the top, whether or not the top actually exists. We’re in a perpetual state of vicious, hungry motion.

“Until we’re all drinking Soylent, I don’t think New Yorkers will ever rest,” she said.

Can science explain dietary competitiveness? Are we hard-wired to judge each other for the imitation cheese or real pork belly we eat or do not eat?

I spoke with Dr. Amanda Baten, founder of The Center for Integrative Practices, and a New York-based clinical psychologist who specializes in behavioral therapy, neuropsychology and nutritional psychology.

In her opinion, it isn’t the specific wheat-free, dairy-free, solid food-free plans that make us freak out at each other.

Rather, it’s that in a competitive city like New York, we often end up with distorted beliefs making us feel unworthy, inadequate and ashamed of ourselves. Sometimes, that shame results in envy, a “healthy though negative response,” Dr. Baten explained in an email.

“Envy allows us to check in with our goals and objectives, and problem solve to meet them,” she continued.

But sometimes our reaction is jealousy, which we experience instead of envy “when we tell ourselves we cannot tolerate the healthy negative feelings…which leads us down an unproductive path and keeps us mired in shame. That actually confirms our beliefs of feeling inadequate and unworthy.”

In other words, it’s when we’re mired in shame that we become hateful monsters who secretly stuff cheese in our dates’ sandwiches while they’re in the bathroom.

“Our primitive response to shame is to either lash out at others, attack ourselves, or both,” Dr. Baten said.

So every time we condemn a juicer, it’s because deep down we’re jealous of that person’s ability to maintain a restrictive diet.

Our jealousy might even stem from something non-diet related, like work, fashion or wealth, but we’ll seize upon food because it’s an easy way to knock each other down.

It all reminded me of something Ms. Lorenz had said to me a few days before.

“You meet people that are just total health nuts, or on some juice cleanse, and you’re thinking, ‘God, I could never do that, because it would be so difficult and challenging,’” she said. “But you’re not going to say that to them. You’re probably like, ‘That’s stupid and unhealthy. You’re an idiot. Cleanses are a joke.’”

Or as Dr. Baten put it, “If someone is feeling pretty good about themselves, what do they care if someone’s a vegan or not?”

We’re all fighting a status war. But how many of the things we compete over have a fixed end? Too rich, too in shape, too successful – too good at riding the hamster wheel.

On the flip side, the never-ending struggle is what makes New York, well, New York. Without any fixed goals, we’re conveniently positioned to be in perpetual motion, which perhaps means perpetual progress. If we didn’t tear each other apart, the city would become the shark that stops swimming and drowns.

Maybe ripping on each other’s eating habits is actually the healthiest thing we can do. 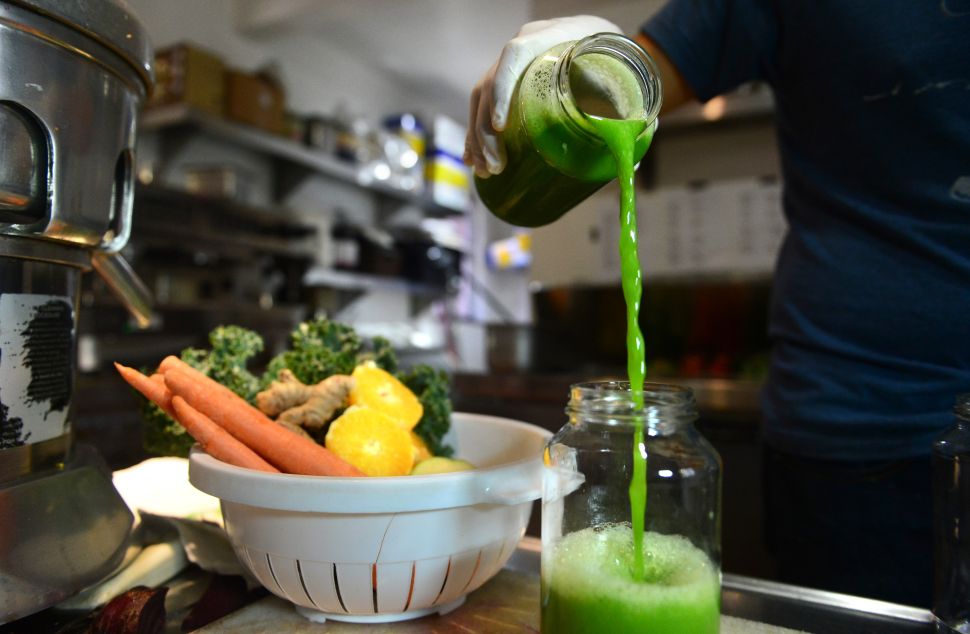