PLAINFIELD – A fight for local control in a majority African-American city puts Plainfield squarely at the center of Assemblywoman Bonnie Watson Coleman’s (D-15) strategy for victory in CD12.

The strategy has a simple collision course dynamic: let the abiding hatred the two local political kingpins have for each other turn into vote-spiking Election Day love for the lone African-American contender in the race to succeed retiring U.S. Rep. Rush Holt (D-12).

The mechanics make that game plan slightly more complex, even too complicated to benefit the candidate, according to one of the political combatants here; but not enough to damage Watson Coleman, says an expert.

It starts at the local level where three council seats are at stake.

If the slate backed by Assemblyman Jerry Green (D-22) succeeds, the veteran chairman of the Union County Democratic Committee maintains control of the local governing body.

A sweep would mean a 6-1 Green advantage.

Mayors come and go, or so say the allies of Jerry Green, who remains the constant undergirding political presence here.

“Jerry Green is worried about his own power base and how that affects him down the line,” said Patrick Murray, political scientist and pollster for Monmouth University. “If he loses ground to [Mayor Adrian] Mapp in Plainfield, he knows he will have trouble maintaining power countywide.”

If the slate backed by Mapp wins, the mayor would take control of the council for the first time with a 4-3 majority. Incumbent Councilwoman Rebecca Williams leads the mayor’s team.

Mapp and Green came together in a show of unity last year to elect Mapp, which dissolved into an odious backroom war right after Mapp became mayor.

Jettisoned by Green in 2013, former Mayor Sharon Robinson-Briggs now pounds the pavement in Plainfield for the establishment ticket, reanimated in Greenworld with the disintegration of the Green-Mapp alliance.

Running for Congress in a competitive election against state Sen. Linda Greenstein (D-14) of Plainsboro, Watson Coleman occupies Column A, right under incumbent U.S. Sen. Cory Booker (D-NJ), whose popularity in Plainfield evolved in part out of years of campaigning here.

When Booker brought in Eva Longoria for a 2013 campaign appearance, he used Plainfield as the archetypal New Jersey backdrop.

Under Watson Coleman on the ballot are Green’s county candidates, followed by his local council slate, all securely and snugly buttressed by Booker.

While Mapp flummoxed Green earlier this year when he cut in line and endorsed Watson Coleman over Greenstein, the mayor now has the challenge of fielding his team on a ballot all the way over on line E, without the benefit of reinforcement.

Mapp outfoxed Green when he backed Watson Coleman, then Green got his revenge with a ballot that prevents Mapp from backing Watson Coleman without advertising the establishment line and jeopardizing his own Siberia-consigned slate.

Unsurprisingly, Green and Mapp are blaming each other for the resulting confusion and potential negative blowback on Watson Coleman.

“They’re not doing anything for Bonnie Watson Coleman,” Green said of the New Democrats. “They are anti-Democratic Party.”

Green, though, says he believes the war ultimately benefits the assemblywoman.

“What is going on between him and I helps her [Watson Coleman],” he said, arguing that all of his literature features linkages between Booker, Watson Coleman and his local council candidates.

“Booker is going to help her and I’m hoping in the local battle that voters will be smart enough – those voters backing the Line E candidates – to come back to Column A to vote for Bonnie.”

Green chalks up Mapp’s strategic decision to promote only his local candidates as a political blunder after he endorsed the assemblywoman’s congressional bid.

But Mapp said Watson Coleman made a mistake by enlisting Green to serve as a co-chair of her campaign committee.

“It concerns me, quite frankly,” the mayor told PolitickerNJ. “Jerry was dragged kicking and screaming to back Bonnie. When I endorsed her first, he was placed in a box. It’s an endorsement that was not genuine. So I’m more than a bit concerned that she would have Jerry serve as co chair of her campaign. Placing him in that position hurts her campaign. Bonnie is the best person to represent the 12th but her association with Jerry has hurt her and affected her in a big way on the ground in Plainfield.”

Mapp concedes that it’s tough to advocate for the congressional candidate when the ballot demands that he protect his local team first.

Not a single piece of New Democrat mail features the candidates with the Column A-supported Watson Coleman.

“It’s weakened support for Bonnie and I don’t know that she can recover,” Mapp said. “The man [Green] isn’t supporting Bonnie. I wish Bonnie were smart in terms of assessing the situation. It concerns me at this 11th hour of the campaign. Yes, I still stand firmly committed to Bonnie, but thinking strategically about this local campaign, these council seats are so critical to my administration. Jerry tried to cut me off at the knees influencing the votes of obstructionist council people. Everything we put in front of those people, Jerry has blocked.

“If I prevail, it flips the council away from Jerry,” the mayor added. “Plainfield’s future is at stake.”

Murray concedes that Green bracketing his council candidates on Column A with Booker and Watson Coleman puts them in a strong position, yet may deprive Watson Coleman of Line E voters solely focused on the local contest.

It was purely a self-protecting political gambit on the assemblyman’s part.

However, Murray disagrees with Mapp that Watson Coleman will find herself in a depleted condition as a result of the New Democrats not broadcasting support for the assemblywoman.

“Booker above her name helps,” he added.

The local collision will drive turnout, the pollster maintains, and if Watson Coleman loses a few hundred votes to New Democrats laser beamed into Column E, she gain more as a consequence of the Mapp v. Green-inspired vote spike in Union County’s Queen City, Murray said. 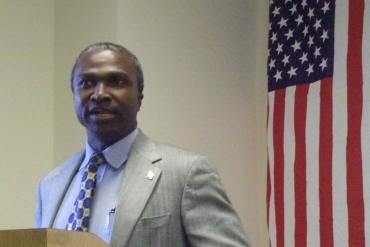