Sweeney and Fulop cordially tried to weather each other’s company alongside Currie – himself wounded in Tuesday’s night’s mayor’s race in Paterson – as the slicing sounds of silverware filled in some uncomfortable conversational silences.

This party convention bash thrown by Currie for the county party chairs (Sweeney allies seeing Fulop in the room of insiders had the same reaction Phil Alagia did when the Jersey City mayor showed up unannounced at an Anibal Ramos fundraiser) was envisioned in part as the Democrats’ prime seaside platform to unveil two establishment mayor-elects: Shavar Jeffries from Newark and Andre Sayegh from Paterson.

Instead, the men who beat the machine in their respective big northern cities have hastily scheduled speaking roles at tomorrow’s luncheon: Mayor-elect Ras Baraka of Newark and Mayor-elect Jose “Joey” Torres of Paterson.

But Baraka has confirmed he’ll be there.

Having triumphed Tuesday night as a political prime mover behind Newark’s mayor-elect, trumping the Sweeney and South Jersey-favored Jeffries, Fulop tried to play the life of the party role tonight with the sudden absence from the scene of the senate president.

Moments later, “He’s not really that dynamic,” groaned a would-be reveler, in reference to the politically stampeding Fulop.

Then the Jersey City mayor announced the victory in Newark of his candidate and a lone voice called out, “Raaaassss Baaaaarrraka!”

That energized the room.

“I am excited that we have such a great gathering of activists, donors, Democratic elected officials, and loyal foot soldiers together under one roof,” said the chairman of the New Jersey Democratic State Committee. “Tonight’s kick-off proves that we are unified and electrified to win congressional seats and local elections this November.” 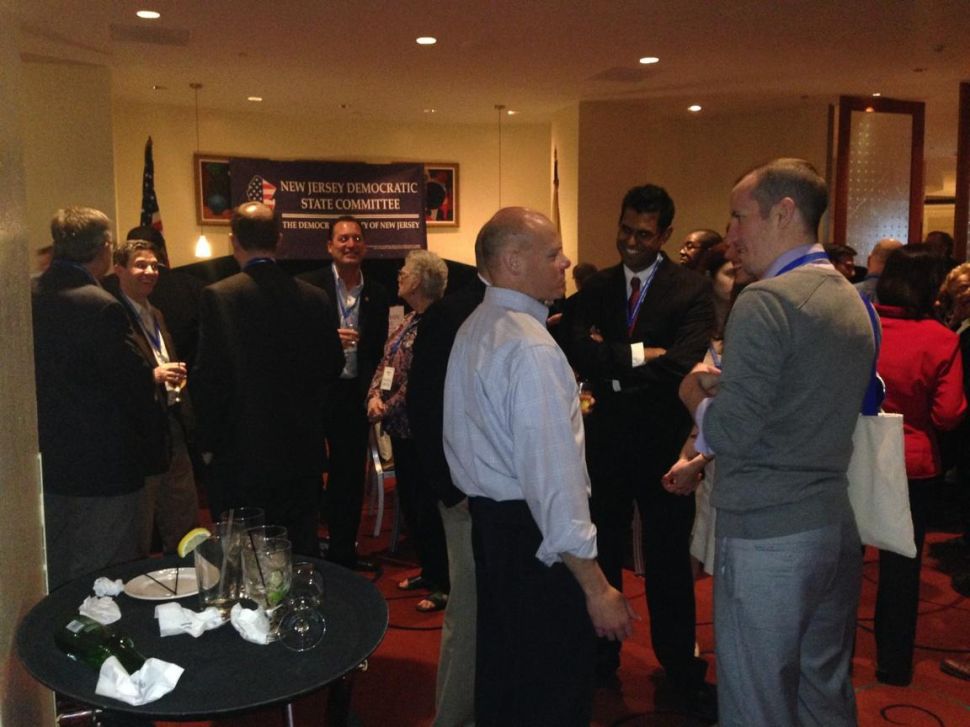