On a winter day in the late 1990s, the artist Fred Tomaselli was gliding through the Florida Everglades with his friend, the art collector Mickey Cartin. “We were on one of these boats that makes more noise than 10 jackhammers outside of your building,” recalled Mr. Cartin. “This was one of the most uncomfortable hours of my life with all the noise, and the bugs and whatever, but Fred was just sitting there with this big grin on his face and his binoculars stuck in front of his eyes. I just remember thinking, ‘Boy, this is a guy who really sees humor and joy.’”

Years later, Mr. Tomaselli, 57, is still an avid birdwatcher. Seated in his spacious East Williamsburg studio earlier this month, he described, with a park ranger’s pride, spotting three red-necked grebes in Prospect Park. He looks the part, with alert blue eyes behind black frame glasses, and his favored outfit of T-shirt and beat-up sneakers. A family man more content under the fig tree in the backyard he shares with his wife and son, he eschews the gala circuit. Though he attended the Brooklyn Museum’s Artists Ball last month, he was, as he put it, “forced” to go (he sits on the museum’s board). “I even put on a tie,” he said with a pained expression. At a recent Cooper Union student exhibition, Mr. Cartin’s companion mistook Mr. Tomaselli for the building’s janitor.

Avian subjects have appeared in Mr. Tomaselli’s work—trippy composites of paint, cutout images and objects encased in resin—for decades, but it’s not the birds people tend to remember. He is best known for using drugs as an art medium: for years, he embedded psychoactive and pharmaceutical pills in his work, placing mind-altering substances alongside over-the-counter medicines. (In 1997, critic Peter Schjeldahl described him as “the guy who puts drugs in his paintings.”)

But Mr. Tomaselli has steered away from the medicine cabinet. Search the dense, dazzling works comprising “Current Events,” his new show at James Cohan Gallery, and you won’t find a single pill. “I guess when people predicted they would be there, I decided not to have them there,” he said.

The show, which opened to the public May 1, is Mr. Tomaselli’s first at the gallery since 2006. This likely accounted for the sizable crowd at the reception that night, which spilled out onto West 26th Street. “I’m a slow poke,” he said with a shrug. His practice, with its painstaking arrangement of stamp-size collage elements, is laborious. Nevertheless, he has spent the interim between Cohan shows mounting exhibitions at White Cube, his London gallery, and at the Modern Art Museum of Fort Worth, in Texas. Additionally, a mid-career survey traveled from the Aspen Art Museum to Skidmore College to the Brooklyn Museum, where it arrived in 2010.

Since his last New York show, he has been developing his New York Times series. The frequently humorous works involve painting and collaging over the paper’s front-page photo. Some infuse dark images with whimsy—bullet holes riddling the U.S. embassy in Kabul become bouquets—while others exist somewhere between levity and grim reality. In one, Mr. Tomaselli transformed Vladimir Putin, flanked by a military posse, into a nude woman wearing a red Pussy Riot-style balaclava.

“That one’s funny I think, but it’s also really chilling because it’s this naked lady being masked and then being paraded around in the cold of the snow,” said Mr. Tomaselli.

In these works, he said he is attempting to convey the “bipolar relationship between beauty and pain” that defines life. “I’m swimming in the pool and everything’s great,” he said, describing the effect he is trying to capture, “and then I walk out and there’s a homeless guy with scabs all over his legs asking for a dollar. Or I go into Prospect Park and I’m looking at birds, and then I read the paper and people have been blown up in Iraq.”

In some cases, the newspaper pieces function as studies for his larger collage works. These suggest what Arcimboldo might have made if he’d had access to peyote and magazines. One features a giant cardinal, its body a riot of red flowers and fruit. Dozens of eyes billow out of the bird’s head, and over these, Mr. Tomaselli has painted colorful little bullseyes. The subtly layered, complex depth of these pictures, heightened by his relatively new practice of painting on top of the resin as well as beneath it, is impossible to render in reproductions.

Birding has been a part of Mr. Tomaselli’s life for decades, at least since he moved from California, where he grew up, to a then-un-gentrified Williamsburg, Brooklyn, in 1985. There, he met the painter Amy Sillman, who said that when the West Coast transplant wasn’t in the studio, he was embarking on outdoorsy adventures. Once, he spent the day kayaking all the way around Manhattan.

“He had amazing stories about getting off into areas at the various tips of Manhattan where it was really wild, where people were living on little shoreline areas that weren’t expecting a visitor, that it was like going to a foreign country,” said Ms. Sillman.

Tom Finkelpearl, Mayor de Blasio’s newly appointed commissioner of cultural affairs, remembered Mr. Tomaselli nearly being arrested for bird watching in Jamaica Bay’s wildlife refuge. He’d been surfing in the nearby Rockaways, and, still in his wetsuit, had a hard time convincing authorities he wasn’t there to swim in the protected waters.

It was Mr. Finkelpearl who in 1987 gave Mr. Tomaselli his break, a one-man show at PS1 where Mr. Finkelpearl was a curator. Mr. Tomaselli was making installations at the time, and he presented small buildings made of green electrical panels, speakers filled with sand that would shoot out with the sound and Styrofoam cups that undulated in wave patterns on the floor, moving in the wind from several fans.

“People loved it,” said Mr. Finkelpearl of the show. “It was very popular. One of the things about Fred’s work is it’s always got this incredible appeal to it. It’s accessible. It doesn’t mean it’s not interesting or profound, but it is playful.”

Mr. Tomaselli increasingly shifted from installations back into two-dimensional work (he was trained as a painter at Cal State Fullerton), and in the 1990s, he began incorporating drugs into his abstract collages. With the drug works, he saw his first major commercial success.

When he left Jack Tilton Gallery in 1998, he was pursued by a pack of suitors, and chose James Cohan because he remembered the dealer treating him well years earlier, when he was doing framing jobs at Paula Cooper Gallery, where Mr. Cohan was once a director.

“You get the art world you deserve,” said Mr. Tomaselli of his choice. “I just felt I didn’t want to spend my time looking over my shoulder or being freaked out by some nutbag screaming at me on the other end of the phone.”

Mr. Tomaselli ceased putting drugs in his works 2005, when they came to dominate the conversations about his work. “It really, really could have been easy to just stop there,” said Mr. Finkelpearl. “He was selling those things for a lot of money. I always admire artists who take a U-turn, especially during periods when they’re highly successful.”

Though Mr. Tomaselli has moved on, the drugs have stuck in people’s minds. They hadn’t appeared in his resin collages for five years by the time his survey hit the Brooklyn Museum, yet still critics focused on the pieces that had them. “By integrating real, licit drugs into the fabric of his work, he connects transcendence and the pharmaceutical industry, which weaves and disseminates its own mass hallucinatory dream of better living through chemistry,” wrote Ken Johnson in The New York Times. “So the light and dark sides of drugs come together, as if Mr. Tomaselli himself were of two minds about it all.”

“He’s happy to leave that in his past,” said curator Eugenie Tsai, who organized that iteration of the show. “When Ken Johnson wrote that glowing review, I said, ‘This is a glowing review, it’s great, and it’s a glowing review for the wrong reasons. Why does he have to dwell on the whole psychedelia aspect of his work?’”

These days, Mr. Tomaselli is allowing his art to surprise him. The earlier pill pieces, he said, were essentially illustrations of his ideas about perception, but his new works aren’t as obvious. “I know less about my work now than I used to,” he said. “For me, it’s the only way to go forward. I couldn’t keep making work I knew what it was going to look like.”

“There’s something kind of mystical about the work, it doesn’t fit into categories easily in terms of the art world,” said Mr. Finkelpearl. “The art world has definitely never liked to talk about anything that could even potentially could verge on metaphysical or the spiritual, right? It’s sort of off limits. But he does it in a way that’s super systematic.”

Hanging in a corner of Mr. Tomaselli’s studio is an 18th-century Tibetan tanka depicting a ferocious, many-armed deity devouring another, mid-coitus. She’s trampling smaller figures on a lotus flower, and the margins of the image are crammed with more macabre, tangled narratives: demons skinning people alive, all hell breaking loose.

“I like how I can’t get to the bottom of it,” said Mr. Tomaselli, staring intently at the tanka. “I can keep looking at them and there’s always something new that’s being revealed to me. I like to look at art that continues to reveal over time, or stays mysterious.” 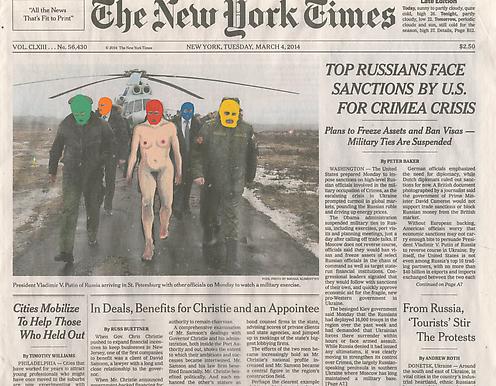