Forget David Beckham for H&M — the new name in underwear universe is… the Naked Cowboy.

Clothing brand Fruit of the Loom is launching their new boxer briefs with the help of a true New York City icon, the Associated Press reported.

The Naked Cowboy, whose real name is Robert Burck, became famous for playing guitar in front of curious Times Square spectators, wearing nothing more than briefs, a cowboy hat and cowboy boots.

“His primary wardrobe is so important to his daily job, we thought why not showcase him in our new boxer briefs,” Melissa Burgess-Taylor, senior vice president for marketing and merchandising for Fruit of the Loom, told the AP.

The new line comes with a Nasdaq Tower billboard that will read “Even the Naked Cowboy has changed his underwear.”

However, the Observer is not so sure that Mr. Burck has changed his underwear for a long time, or at least not changed the brand. An excerpt from a 2012 interview on the No Jo Schmo website reveals that Fruit of the Loom briefs have been the Naked Cowboy’s favorite for a long time:

“Fruit of the Loom, which is what my mother bought me when I first started. They come in packs of six, but I always keep a seventh just in case. I wear two pairs at a time: one painted with Naked Cowboy, and one unpainted,” the cowboy replied when asked to share what type of briefs he wears.

The new line, which features tapered legs to prevent the underpants from riding up, hits the market on Tuesday. But for those looking for the real deal, Mr. Burck’s briefs are available on his website for $15 … “Skid-marks not included!!!”

The briefs will be sold in several colors in Wal-Mart, Kmart and Target stores for $13.99 for a five-pack. 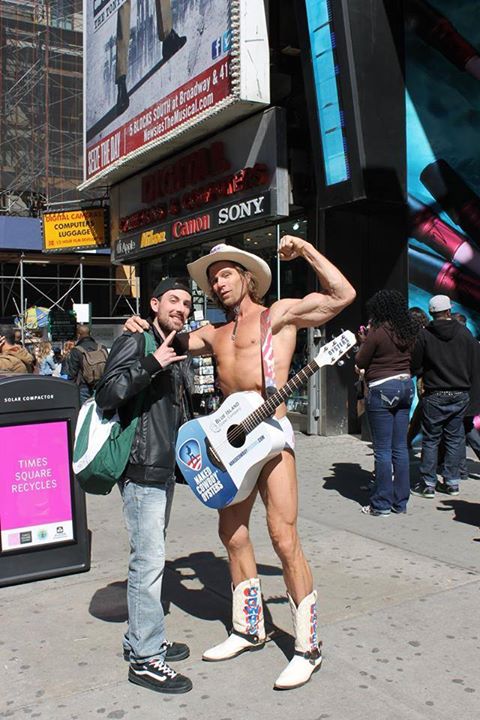