TRENTON – Republican lawmakers want the legislative committee investigating the Bridgegate controversy to hold public meetings at the Port Authority of New York and New Jersey to talk to lower level staff about the lane closures.

Assemblywoman Amy Handlin told lawmakers she invites upcoming testimony from Patrick Foye, executive director of the authority, slated for June 3 and argued lawmakers investigating the administration over the George Washington Bridge lane closures should extend interviews to other agency employees – similar to how the committee is questioning lower level Christie administration officials, she said.

“We’re scheduled to hear from Patrick Foye … and I’m optimistic that his testimony will inform new legislation,” Handlin said. “Why don’t we schedule a meeting of this committee on the premise of the Port Authority … that will put us right at the scene of the crime, if you will, and will enable us to hear from [other Port Authority employees].”

“It’s an interesting idea,” responded Sen. Loretta Weinberg, co-chairperson of the joint legislative committee investigating the administration over the lane closure controversy. “We will certainly take that under advice.”

The committee is about to hear testimony from Matt Mowers, a former Christie campaign staffer who approached Fort Lee’s mayor about endorsing the governor’s re-election bid. 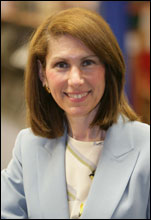