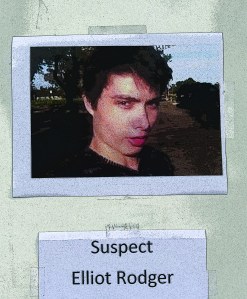 When Elliot Rodger killed six people in Santa Barbara the other night, only two of them were members of the gender he loved to hate. But unlike previous young, male rampagers, whose rage is always fobbed off as mental illness and gun culture, Mr. Rodger left no doubt as to what drove him to kill.

“Women are like a plague,” he wrote in a 141-page manifesto. “They are like animals, completely controlled by their primal, depraved emotions and impulses.”

Misogyny in all of its forms, from mild to virulent to deadly, is so subtly thread into society that we do not usually speak of it. Mr. Rodger made it impossible to ignore.

At 2:48 a.m. on the night of the shootings, at least one other PUAhate.com user called him a hero, according to comments gleaned by Josh Glasstetter of the Southern Poverty Law Center before the site went dark.

Having lost their website, its aficionados moved elsewhere. A Reddit poster named El_Robino wrote: “I heard that New Yorkers became a lot nicer after 9/11. Could this happen to women as a gender after today’s events? I’m seeing that some feminists’ subreddits are toning down their anti-male vitriol after today’s incident.”

When someone pointed out the misogyny at the heart of the incident, El_Robino responded, “get shot slut.”

I’ve often written about the crazy open misogyny of the Islamists who have codified control of females in laws so that children can be married off to old men, girls stoned for being raped, women trapped in legal child status for life. When Boko Haram got on the world map by kidnapping nearly 300 girls, I wrote that these men are like millions of other marginalized men around the world for whom feminism is a profound challenge because it takes away their birthright to treat women like property.

But the Taliban and Boko Haram are part of a global phenomenon that rages beyond the third world, elements of which we have right here at home.

At 15, he wrote about the daughter of a family friend, who was 14: “She was a total bitch anyway, and her attitude would only get worse. She is a true representative of everything I hate about women.”

He despised girls in part for liking his oppressors more than they liked him. “One boy who was tall and had blonde hair called me a ‘loser,’ right in front of his girlfriends,” he wrote in his manifesto. “Yes, he had girls with him. Pretty girls. And they didn’t seem to mind that he was such an evil bastard. … This is how girls are, and I was starting to realize it. The most meanest and depraved of men come out on top, and women flock to these men.” Other online rants uncovered by the Southern Poverty Law Center targeted Indian and black men for getting more action than he did.

Last spring, he found his online home at PUAhate.com. “It is a forum full of men who are starved of sex, just like me,” he wrote. “Many of them have their own theories of what women are attracted to, and many of them share my hatred of women, though unlike me they would be too cowardly to act on it. Reading the posts on that website only confirmed many of the theories I had about how wicked and degenerate women really are.”

Soon, he styled himself a warrior, out to avenge the incels, according to his posts uncovered by Mr. Glasstetter: “One day incels will realize their true strength and numbers, and will overthrow this oppressive feminist system. Start envisioning a world where WOMEN FEAR YOU.”

By this time, Mr. Rodger had developed a habit of tossing coffee or iced tea on young people who were kissing in public. He wrote about watching a crowd of muscular guys and pretty babes playing in a park. The sight so enraged him that he went to a nearby Vons, bought a carton of orange juice and a Super Soaker and sprayed them, peeling out in his car when the men came after him.

And yet, mom and dad apparently missed the open howl of rage against women that he invited them to share with him. “I tried to show [PUAhate.com] to my parents, to give them some sort dose of reality as to why I am so miserable,” he wrote. “They never understood why I am so miserable. They have always had the delusion that everything is going well for me, especially my father.”

According to their son, they never opened the PUAhate link.

Is it possible that four parents (his biological parents and their partners) and untold numbers of school counselors and therapists did not see signs of the woman hatred that apparently drove him to kill? Yes. It’s too close and pervasive. It’s like asking people to see air.

Gun rampages are a male phenomenon and need to be treated as such. “If the main underlying factor in rampage killings is guns and mental illness, then why don’t girls and women commit fifty percent of the violence? They have access to guns, and many of them suffer from mental health challenges,” says the writer Jackson Katz, who studies male violence.

One hopes that with a massive social media hashtag campaign underway, some member of the therapy community will wake up and call this disease what it really is.

Give virulent misogyny its own DSM entry and start funding treatment research. If that means a portion of men among us end up in strait jackets for a few years, sorry guys. Blame yourselves, not the victims.