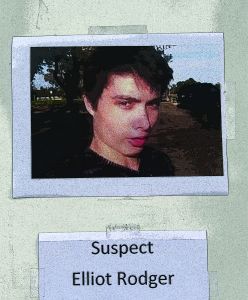 An undated photo of murder suspect Elliot Rodger is seen at a press conference by the Santa Barbara County Sheriff in Goleta, California May 24, 2014. Rodger, 22, went on a rampage in Isla Vista near the University of California at Santa Barbara campus, stabbed three people to death at his apartment before shooting to death three more in a terrorizing crime spree through the neighborhood. AFP PHOTO / ROBYN BECK (Photo credit should read ROBYN BECK/AFP/Getty Images)