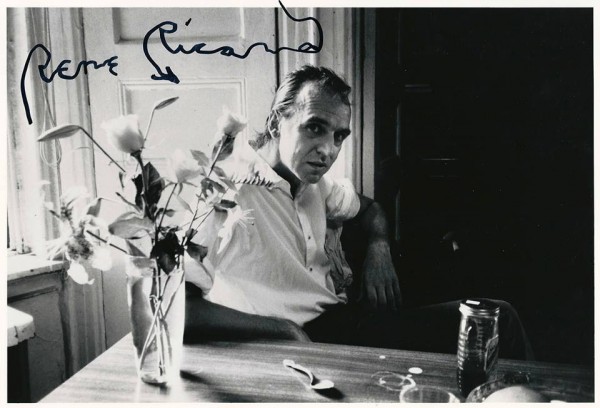 Rene Ricard, the art critic, chronicler of downtown Manhattan, poet, painter, gadabout and gadfly who died on Feb. 1 at the age of 67, was also a fan of Negronis. As scores of people ducked out of the cool drizzle into the Eldridge Street Synagogue for a memorial in his honor on a recent Thursday evening, they found bartenders not only steadily pouring wine but also shaking the cocktails. They’d be at it all night.

Gathered together was very possibly the most impressive art crowd assembled anywhere in recent years–at least outside of an art fair. Among the poets, artists and aesthetes sitting in the pews of the 127-year-old building were Matthew Marks, Jeffrey Deitch and Larry Gagosian, Francesco Clemente and Brice Marden, Jay Sanders, Bob Nickas and Glenn O’Brien and lots of Schnabels. They were treated to two rollicking, moving hours of stories about Ricard’s life, warts and all.

He arrived in New York in the late 1960s, planning to work for the avant-garde director Jack Smith, performer Penny Arcade recalled. “Jack told him to meet him on the corner of Greene Street, and to call him from a phone booth on the corner,” she said. “And apparently Jack looked out the window and rejected Rene. And that was how Rene went to work for his second choice, Andy Warhol.”

Ricard had that preternatural ability to be in the right place at the right time, meeting artists just as they are about to explode to fame, and dropping in on the best parties at the best moments. That’s no easy feat. It requires an absolutely relentless social calendar, and many marveled that Ricard was one of the first people they met upon moving to the city. “It’s like he was here waiting for us,” Raymond Foye, the publisher and writer and a co-organizer of the service, mused.

Mr. Foye gamely served as its emcee, introducing the 20-odd speakers in chronological order while standing near one of Ricard’s paintings, a grey and pink number on which he had scrawled, in his inimitable brushy, cursive script, “When I died a glorious light beckoned me. I could go or stay. I chose the light. It was the devil.”

Mr. Clemente read John Wieners’ 1969 poem “Supplication”—“O poetry, visit this house often, imbue my life with success, leave me not alone, give me a wife and home…”—before admitting that Ricard probably would have disagreed with every word of it. “Rene did not pray for poetry to visit his house,” he said, “Poetry was his house, and since poetry was his house, Rene was never truly homeless, even for the period when he slept on the F train.”

Luc Sante, who said that Ricard “would make periodic appearances in my head when I was writing, to call me on my bullshit,” read the artist’s “Party Manifesto,” which goes, in part: “I will never apply for a grant. Let me starve. I must look out for my biography. After all, I may be a pariah, but I am still, and always will be, a living legend. I’d rather starve.”

Richard Hell spoke about the magic of Ricard’s criticism. “The way it worked was that Rene’s writing was so brilliant and whacked out and entertaining, you knew that anything he liked had to be good, that was all,” he said. “It wasn’t anything he said about the painters.” He had gotten to know Ricard when they lived in the same building on East 12th Street. “Unfortunately, Rene alienated most of the tenants by setting fire to his apartment. I don’t think it was exactly deliberate—he was just smoking a lot of crack,” he said. “I was never in that apartment of his, but people told me that it was littered with crumpled newspaper and human feces. Maybe one of the other speakers can confirm or deny that story.” (At least three subsequent speakers made pointed rebuttals: no feces.)

But other bad behavior went unchallenged. Michele Zalopany fondly recalled the time she introduced Ricard to her dad: “Rene took one look at my father and said, ‘I want to suck your father’s cock.’” Artist Peter McGough remembered offering him a slice of vegan chocolate cake, and Ricard happily departing with the whole thing in hand.

Mr. Foye himself recalled meeting Ricard at Allen Ginsberg’s apartment. “I was 21, he was 31,” he said. “I gave him my address and the next day he woke me up banging on my basement window that faced the street. He had a plan. He’d agreed to write an essay for Pace Gallery and wanted to collect the $10,000 advance.” They got the money. “We immediately went to the Russian Tea Room for bellinis, caviar, and vodka”—$900 worth, which Ricard followed with a $900 Jean Paul Gaultier underwear shopping spree. “The day went on in this manner and later the next morning I dropped him at the men’s homeless shelter on the Bowery, penniless.” The crowd erupted in applause.

Alongside that extravagance, Mr. Foye said, he had also seen the writer “repay loans, treat his poorer friends lavishly, and in general live like the ruined aristocrat that he was, an esoteric French count, fallen on hard times.” (The Negroni’s origin story, as the invention of an Italian nobleman, was no doubt part of the drink’s appeal for Ricard, he suggested.)

Unlisted on the program, Mr. Gagosian ambled up next. “He was unavoidable,” he said. “His energy was unmistakable, and he just made himself be known, and there was really no way of getting around Rene, nor would you want to avoid him.

“One of his great geniuses, it occurred to me, as I was sitting here listening to the wonderful readers this evening is that he didn’t change.” (As it happens, the dealer made his own Ricard commission, asking him to write an essay on Basquiat that the writer worked on for the last year of his life, clocking in at 50,000 words.)

It was one of those nights when every joke lands and every anecdote charms, when everyone wants things to go perfectly and so they more or less do.

Midway through the program, Brice Marden, his trademark little black hat doing yarmulke duty, opened up one of Ricard’s books and read his poem “On Being Called a Dilettante,” which he wrote in 1977, when he was only 30 or 31. An excerpt:

Brice Marden called me a dilettante
The other night. It serves me right.
I don’t make a big deal about my talent
And am so unsure about the quality of
My work that I never show it to people
So I guess that they think I don’t do anything.
I’ve never earned a penny from my work
Which does in a sense make it worthless.

Lola Schnabel began with a long poem of her own, addressed to “Saint Rene.”

“Not only did you name me Lola,” she said, “so that you could have a little girl to call Lolita, you made our home enchanting, loved my mother unconditionally, and knew all of my secrets even before I was aware of them.”

She asked for 67 seconds of silence after she was done speaking, to “kind of send him off, since he’s almost an angel,” and then read the shortest Ricard poem of the evening: “I’ll never be old. I’ll be young. And then one day I’ll be gone.”