NEWARK – Insiders wonder how long it will take two powerful on again/off again political bosses to call Jersey City Mayor Steve Fulop next Tuesday if Ras Baraka defeats Shavar Jeffries – and who will execute faster with the Machiavellian aim of maintaining a leg up on future statewide domination.

Virtually alone in the upper reaches of Democratic Party power in his choice to back Baraka in the Newark mayoral election, the Hudson-bound Fulop in this campaign cycle made a play for muscle in neighboring Essex.

A Baraka victory would strengthen Fulop’s hand as he seeks an advantage over other players intent on succeeding Gov. Chris Christie.

Hudson and Essex together add up to 330,169 registered Democrats, more than Atlantic, Cumberland, Gloucester, Camden, Salem and Burlington combined (313,896).

If a humbled DiVincenzo calls Fulop first in the aftermath of a Jeffries loss he can signal that he wants to begin the process of solidifying a badly frayed North Jersey.

The play has payback potential for DiVincenzo.

Now the toppled Oliver – in a blatant sign of once again cutting left when DiVincenzo cuts right – backs Baraka.

Next Tuesday, if his candidate comes up short, DiVincenzo can cut in the power line with a single phone call to Fulop.

If Norcross punked Essex last year, now DiVincenzo – with one outstretched arm across the Passaic and Hackensack rivers  – can put in motion the politics to freeze out the long-reigning South Jersey machine.

But Norcross has less emotion riding on next Tuesday’s election.

They want Jeffries to win, and as Fulop parades jauntily with Baraka on the other side of the city divide, they want the added benefit of beating him.

Removed from the field of battle, Norcross can maintain a coldly surveying eye. Independent expenditures with his political fingerprints on them continue to strafe Newark and the renegade forces of Baraka and his allies.

But ultimately, Norcross knows a loss in Newark boomerangs more immediately and painfully on DiVincenzo and company.

Content to live in a world of northern division, he can exert little emotion when sizing up the redrawn battle lines and once again picking a side.

With one well-timed phone call to Fulop, the South Jersey boss can take advantage of a ravaged Essex landscape and an emotionally involved and wounded DiVincenzo and set in motion the further isolation of the executive by cozying up to Fulop and Baraka.

Given the move he made to remove Oliver, the groundwork already exists for Norcross to build on the relationship with North Hudson County’s Sacco by strengthening his ties to South Hudson’s Fulop.

But Norcross has the complication of Senate President Steve Sweeney (D-3), his longtime regional ally, who also wants to be governor and who has warmed early to a statewide rivalry with Fulop, and whose allies alongside Norcross want badly for Jeffries to beat Baraka in part to crumple up the Jersey City mayor.

Would Norcross – in a reach-out to a triumphant Fulop – be forced to rely on messengers to avoid offending Sweeney outright? Or would now, in the wake of a Newark loss, be precisely the time to telegraph a change in statewide 2017 strategy?

Many will argue it’s too early.

But each election sets up newly realized alliances for the next one.

If he’s victorious, Fulop doesn’t have to make a phone call. He can wait.

Of course, if DiVincenzo and Norcross feel mutually stung by the upstart mayor and publicly unimpressed by his decision to back an openly antagonistic brand like Baraka, they might agree to side-step Fulop altogether and call each other, to re-solidify the North-South alliance, and put Sacco on a conference call just to make sure everyone who matters can agree that Fulop is still a renegade.

They could even add state Sen. Brian P. Stack (D-33), the other half of North Hudson dominance, to re-cohere the old guard.

But when everyone has hung up, will one know if the other doesn’t later make that Fulop phone call on the sly? 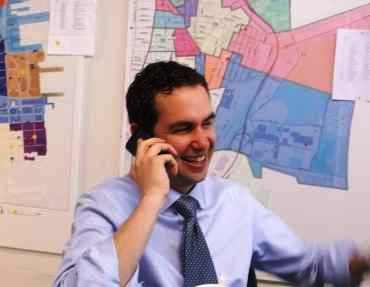