NEWARK- Establishment forces backing Shavar Jeffries continue to full-court-press a close contest storyline in the Newark mayor’s race, sending, if not a shiver up the spines of Ras Baraka allies, gut-check phones calls, at the very least, concerning the broader implications of a Baraka loss.

One well-known name comes immediately to mind as someone who would end up in the loser’s column, writhing under the equivalent of a locker room pink belly gleefully administered by those party enemies not so much of Baraka but of one of his most aggressive backers – Jersey City Mayor Steve Fulop.

Ground game-wired Baraka allies dismiss the polling memo as the desperate, 11th hour dispatches of an overrun army – although it should be noted that pollster Jeff Plaut did Fulop’s polling last year.

If the May 13th race is close, and indeed if Baraka finds himself swamped down the stretch by a successful Jeffries bomb run, what would that mean for Fulop, Baraka’s most visibly politically aspiring ally, who went all-in with Baraka?

PolitickerNJ talked to insiders about that possible outcome, essentially trying to get someone to say that the Drumthwacket-intending Fulop, in the words of Joy Behar, would be “toast” statewide.

No one said as much; no one used the word “done,” as most – including those favoring a Jeffries victory – hedged, and sought to downplay the consequences either way.

One recurring criticism of Fulop, is that by backing Baraka, Fulop bucked his own allies in the schools reform movement.

Baraka opposes the urban school reform overhauls Fulop claimed to crave when he was building his own political machine in Jersey City.

He’ll have to repair those relationships, sources say, but he’ll have to do that even if Baraka wins.

The prevailing opinion in sourceworld is that even a victory wouldn’t last long.

Fulop, sources argue, would be able to enjoy the flashbulbs and champagne bath onstage with Mayor-elect Baraka, and then essentially have to worry about whatever goes wrong with Baraka’s stewardship splashing toxically on his own statewide designs.

Home to 211 murders last year, gutted of a projected $92 million in state aid, conceivably politically divided short of a convincing Baraka or Jeffries victory, the potential in eight days for a spilt city council, and teetering on the edge of a full-blown state-takeover, Newark hardly looks like a staging area for the next rousing success story, sources affirm.

At best, however, Mayor Baraka will be well-positioned to maintain his brand as an activist critic of state-control while deprived of the local levers of power to assume full blame or praise, shorn of Sharpe James-like power and yet credibly politically positioned to demand better state-run government in the form of a Fulop administration.

Both Fulop allies and detractors alike agree that to begin with the Jersey City mayor lacked traction to land the line in Essex County given a wobbly relationship with powerful Executive Joe DiVincenzo.

Faced with the 2014 mayor’s race in a neighboring northern city, Fulop could either have mimicked existing structures and supported Jeffries, who has the backing of DiVincenzo and all of the statewide connective tissue around the executive and in his wider political orbit, including South Jersey Democratic boss George Norcross III and the political functionaries of Senate President Steve Sweeney (D-3), who is right now the establishment favorite for governor in 2017 – or he could support the alternative.

The way Fulop saw it, he had one play.

He told numerous other politicians he just an instinct about it.

He wouldn’t be the number one choice.

Sweeney appeared too aggressive in his own right, securing a statewide political advantage in exchange for advancing the political careers of numerous North Jersey Democrats in key counties.

Unable to leverage whole counties by assigning strategic chairmanships and leadership roles in Trenton, Fulop viewed throwing his support to the South Ward councilman in the state’s biggest city as all upside.

With Baraka empowered, Fulop had the potential to secure the political affections of a player occupying the mayor’s seat in politically vital Essex County.

The downside of a Baraka loss meant little more than Fulop maintaining his current political circumstances.

Maybe he gets dinged next week and slapped around with a Jeffries win; ridiculed by Sweeney’s allies in Essex and South Jersey, but it doesn’t go father that that, most insiders insist; he still has a grassroots army led by Baraka that might not have been able to win the line for him even in victory but that can still add firepower in a Democratic Primary.

And Newark could tank even more with Jeffries, giving Baraka a chance to play the “I told you so” card from the hinterlands with Fulop in tow.

The bottom line is no one expected Fulop to be so forceful in his support for Baraka.

The Jersey City mayor has committed dollars, operatives, allies, donors and his public name – all with the expectation of a Baraka victory lifting at least his stock as a North Jersey player unwilling to accept what the current party leaders favor.

If Baraka loses, Fulop played and lost, but showed a willingness to play, pulling himself onto a political pedestal with Sweeney and company and losing the opening round of a continuing fight.

That said, Fulop’s allies say the polling memo is bogus, and look forward to what they see as next week’s round one statement. 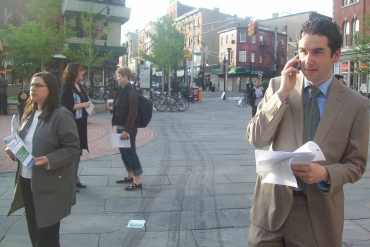