NEWARK – During last week’s New Jersey Democratic State Committee conference in Atlantic City, the table laid out in the halls of the Sheraton Hotel for the re-election campaign of U.S. Senator Cory Booker (D-NJ) was stacked high with copies of a singular 2005 documentary, Street Fight, the story of Booker’s foiled struggle against then-incumbent Newark Mayor Sharpe James in the 2002 mayoral race.

Booker would triumph four years later, although James declined to give him the opportunity to wage a second war to even the score. James would be convicted on federal fraud charges in 2008 and subsequently would serve 18 months in prison. Booker was re-elected as Newark’s mayor in 2010, and went on to win a special election to the U.S. Senate in 2013 following the demise of U.S. Senator Frank Lautenberg (D-NJ).

But in the ever-shifting world of New Jersey politics, any politician who is shot down in one moment could be riding high the next.

The 2014 Newark mayoral campaign might not have been another street fight, but in some ways it resembled the 1966 war film The Battle of Algiers. The local insurgent ground forces of the ultimately victorious Mayor-elect Ras Baraka fought against the airwave bombardment of rival candidate Shavar Jeffries, whose campaign was largely fueled by outside independent expenditure funds.

At the age of 78, Sharpe James hit Newark’s streets hard during the recently-concluded Battle of Newark not only on behalf of Baraka, who he endorsed over Jeffries. He also came out in full force on behalf of his son, John Sharpe James, a member of Baraka’s council slate and now the councilman-elect to the South Ward seat that his father held for 16 years.

As a result of these events, the word on the streets in New Jersey’s largest city is this: Sharpe James is back.

But when asked by PolitickerNJ.com to comment on the apparent comeback of his erstwhile rival, Booker, who was endorsed by James for the U.S. Senate last year, didn’t completely agree with the on-the-ground view of the changing power dynamic in Newark.

“Sharpe never left. He’s always been a big part of the city,” said Booker, referencing in part James’ 20-year run as Newark’s mayor. “During the time that I was mayor, he was very influential. Obviously, he’s not back [as mayor], but his son was elected. I think it’s a good thing for the city.” 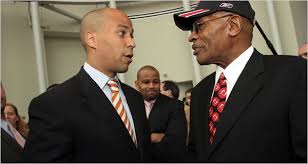