Remember, those sources point out, the South Ward-schooled Oliver at one point considered carrying on the federal work of her mentor, the late U.S. Rep. Donald Payne (D-10). At the peak of her political life, she looked hard at a congressional run, opting against it finally out of deference to the elder Payne, and committing to him that she wouldn’t stand in the way of his son in 2012.

But that was then, prior to the exhausting build-up of pin-balling between allies Republican Gov. Chris Christie and Oliver’s boss, powerful Essex County Executive Joe DiVIncenzo; prior to her own off-the-reservation run for the U.S. Senate last year; and prior to the seismic divide that has become this year’s Newark mayor’s race.

A day after DiVincenzo spearheaded a North Ward rally on behalf of Baraka’s rival in the contest, former state Assistant Attorney General Shavar Jeffries, Oliver formally threw in with Baraka.

At least one source still tried to discern DiVincenzo’s olive branch fingerprints in Oliver’s move. She did, after all, tell PolitickerNJ that she continues to support DiVincenzo for county executive.

But another insider speculated on Oliver issuing her support with the express purpose of affiliating with those Baraka forces who, if they win on Tuesday, will be positioned to mull running a candidate against Payne, Jr., who occupies the seat his father had in Congress.

If Baraka beats Jeffries on Tuesday and is unable to bridge the political divide to the county, will he tailor Oliver for a 2014 shot at South Ward nemesis Payne?

A source close to Newark politics said he could see it, noting the combination of genuine distaste Payne and Baraka have for each other, amped right now by the course the mayor’s race has taken; Oliver’s own ambition; and her gnawing quest for federal office reflected in that doom 2013 bid for the U.S. Senate.

Sources continually cite Newark’s dilapidated financial condition as the reason why Baraka, in the interest of not finding resources suddenly frozen, will have to foster productive and cordial relations with county powerhouse DiVincenzo and Christie.

In an effort to build a relationship, in an effort to secure funding and/or freeholder spots as is typically the courtesy afforded the mayor of Newark, Baraka would have at political arm’s length the leverage of being able to back a candidate against Payne; or state Sen. M. Teresa Ruiz (D-29); or any of DiVincenzo’s other allies; or building out 2018 opposition to DiVincenzo himself.

Although arguing the unlikelihood of the gesture in anticipation of Baraka not being able to secure local power with a majority on the city council, another source nonetheless sees the play against Payne if Baraka in victory could not reach consensus with DiVincenzo.

But he doesn’t see Oliver.

Baraka would have his own battery of loyalists better suited to run against the sitting congressman, the source argues; why risk – short of giving her a job in City Hall – empowering a politician with backroom connections to DiVincenzo?

The social worker by trade who often felt stymied by the transactional dimensions of DiVincenzo’s and Christie’s politics, honestly fears, the source said, the influx of Wall Street money buoying the Jeffries campaign and its impact on any chance Newark has of implementing a progressive agenda. 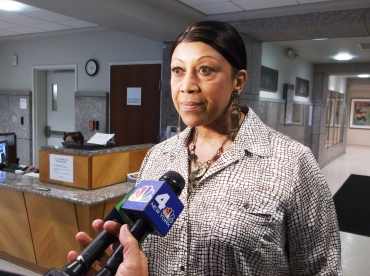