It all started when I was 4 and staring at a naked man’s penis. My mother had dragged me to her Wednesday night drawing class she taught at Parsons, because my father was sick and she couldn’t find a babysitter. With charcoal in hand, my shaking, little fingers outlined the model’s head and torso, until further down, hanging there was a bulbous mound, with a long snout and drooping ears, bearing a uncanny resemblance to my stuffed muppet, Gonzo. To draw the penis or not to draw it? That was the question.

At the end of class, all the students, including the now robed model, ogled my work. I had been found out by a room full of witnesses. The penis was missing.

That would not be the only thingy I recall from my formative years. When my mother, an artist, was in her twenties, she restored Old Masters in Rome and Florence and was greatly inspired by the likes of Tintoretto and Bronzino, among many others. One memorable afternoon, bored in her studio, I wandered off and found an open book with a photo of man in a khaki suit with an uncircumcised penis casually hanging from his fly. It reminded me of the gargantuan earthworm in Roald Dahl’s James and the Giant Peach but not as friendly. Flipping to the next page, I saw a masked man in leather on all fours with a whip protruding from his ass. For that, I had no comparison.

My mother ran over and shut the Robert Mapplethorpe book. “Don’t look at those pictures,” she scolded me.

It was the mixed messages around sexuality that made it all so confusing. It would be one thing if my parents were pot-smoking, hippie nudists, but that was far from the case. My mother was modest; she never showed cleavage and would turn her back to me whenever she changed her shirt. Meanwhile, our loft walls were covered in a rotating assortment of sunny-side-up breasts and dangling shlongs.

Puberty was hell. During family dinners, I tried not to stare at the dick on the wall hanging behind my father’s head. Dr. Levin, a Freud-based eating disorder specialist whom I saw at 15, diagnosed me with generalized anxiety. She believed I was overexposed to sexual imagery.

It was my second week at Vassar when I finally felt my first cock through a pair of jeans. Derek, who I was vaguely attracted to, wanted to show me his film noir poster collection. As I admired Jacques Tourneur’s Out of the Past, Derek flung himself against me. I felt what appeared to be a metal pipe pressing against my stomach. Screaming, I tore myself away and sprinted out of his dorm room only to avoid him for the next four years.

Several weeks later, I finally felt one in the flesh, and it belonged to Jeffrey, my first boyfriend. Not only was Jeffrey a senior, but he was the kindest man I would ever date and that would also have the largest penis. It happened at his TH on B block, one of the many decrepit townhouses for seniors. After cooking me a dinner of roasted portobello mushrooms and overcooked spaghetti, he lead me past crushed beer cans and overturned pizza cartons to his bedroom. And it was there, surrounded by piles of dirty socks and sweaty basketball shorts, that I held it in my own hands.

Many penises later, I stroll through Washington Square Park this past Saturday thinking about the last one that got away. It has been two months with no communication, but he  has been on my mind. Lying back on a patch of grass and enjoying the warmth of the spring sun, I fantasize he’s by my side. I meander over to the dog run and watch a black lab biting at a sprinkler’s spraying of . I look up, and, holy fucking shit, it’s Adam, with his dog, Sally.

“Adam!” I scream wildly flailing my arms. But he has on headphones. I collect myself, adjust my Zac Posen sunglasses and casually stroll in his direction.

“Oh, hey,” I say as if I haven’t just been chasing him around the park, hollering his name.

“Hi.” He grins smugly and awards me with a half-assed hug.

We have some very small talk until he says, “Well, bye.”

“That’s it? You’re just going to walk away?”

He stops. “You said you never wanted to see me again, so I’m finding this awkward,” he said.

“Because you don’t want anything heavy in your personal life,” I finger-quote heavily.

Adam looks to Sally for help.

Resting my hand on my hip, all I can think to say is, “I think about you. Sometimes.”

I don’t mention that I masturbated to him pushing himself inside me just this morning, but that doesn’t stop him from grabbing me and pulling me close. I feel his warm lips enveloping mine, and I bury my face into the nape of neck, smelling the sweet sweat on his olive skin.

“I need to fuck you now,” he whispers in my ear while grabbing my ass with one hand and pulling my hair with the other. We go at it in broad daylight on Washington Square South.

“My parents are out of town. Let’s go to my place,” I suggest.

We manage to make it to Soho and all the way up the elevator with our clothes still on. I lead him passed a wall of 48 sets of breasts, a series of portraits my mother painted based on John Singer Sargent’s female subjects. She removed their frilly, class-distinctive garbs to reveal their bare and unabashed selves.

“Fuck,” Adam says, scanning the boobs and grabbing mine from behind. “That’s a lot of tits.”

Inspired, I take off my T-shirt, and he follows suit. Pressing my chest into his, I try to reconcile our coincidental rendezvous. “It’s so crazy running into you.”

I melt around his hand as he fingers me, and we drop to the floorboards. And there, in the middle of the loft, he takes it out. I do my thing, and suddenly I feel like the Michael Schumacher of the bedroom.

A wise Brentwood yoga guru once told me, “Face your fears, or they will continue to pop up and erect their persistent, ugly heads.” My guru would be proud of what I’ve accomplished since then. 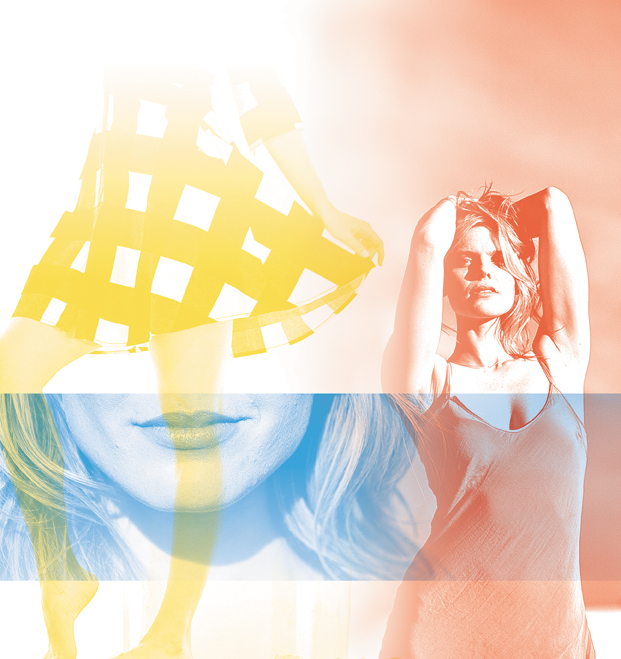