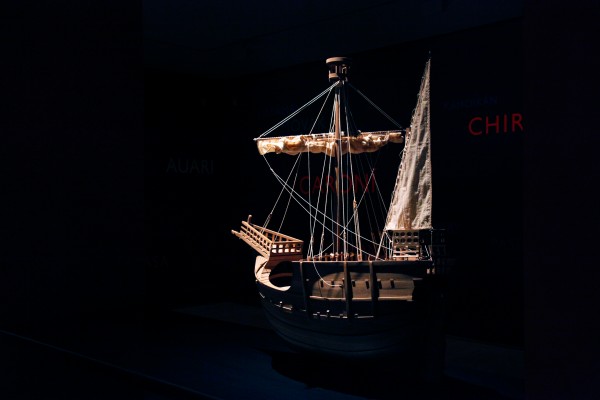 Lothar Baumgarten lived among the fascinating, famously warlike and much written about Yãnomãmi people in Venezuela and Brazil for 18 months between 1978 and 1980, building up enough trust or good will to record 74 hours of sound and shoot nine transfixing hours of 16mm film, most of it black-and-white, of his hosts wrestling, fighting, weeping, drinking and building canoes.

One segment—the footage has been edited down into six segments, for a total of just under two hours, and is projected in alternation around the gallery, surrounded by local names of rivers and cunning wooden models of Iberian ships—opens on a few men in a clearing, hacking at a downed log with machetes. The film’s grainy texture and narrow range of contrast collapses the manifold jungle and the sometimes-relatable, sometimes-completely-mysterious people alike into a weird singularity. Only rarely does anyone seem to notice the camera. Gray bark is stripped away to reveal white wood, the ground is covered in white chips, and when the men use embers to dry out and cure the canoe, white smoke rises from white flames. After hammering in segments of pole as seats, they slide the canoe overland until they make the river. Men and women wear the same bowl haircuts and are all barefoot and nearly naked, but one girl wears a dress and one man a button-up shirt and black jeans. Women wear pegs through their lips and carry bundles strapped to their foreheads and babies in slings; men carry arrows or dogs. A tall tree topples into the , raising a splash like dust.