Several scenes before the slice.

Last night’s episode of Mad Men came with a mature content warning beforehand. As the episode progressed, every live-tweeter was trying to predict what kind of violent act lay ahead.

There was the sudden appearance of a pregnant woman, which, of course, conjured both Manson family conspiracy theories and Rosemary’s Baby parallels — especially when she declared her hankering for steak.

And then Ginsberg chopped his nipple off and presented it to Peggy in a nondescript jewelry box. It’s fair to say nobody predicted that one.

And there we have it. This no-fun season of Mad Men has finally blossomed into the technicolor shitshow it was destined to become. Finally, it’s 1969!

In “The Runaways,” our attention was splintered between five stories, all of which were compelling enough to have carried an episode on their own: Stephanie’s visit, Don’s work problems, Megan’s acting class party, Betty’s feminist awakening and Ginsberg’s “problem,” as it was referred to in a bit of tragicomic understatement in the episode’s summary.

Oh, and there’s also the bit about Lou Avery’s cartoon, Scout’s Honor, but that serves mainly to remind us what a dick he is — and how little his subordinates respect him. While they happily mock Lou’s creative efforts behind his back, they still consider Don to be “part of the faculty” although he’s basically their equal now. And despite Lou’s constant verbal abuse and belittlement of his ranks, it’s clear from Stan’s interactions with him in the creative meeting that no one is actually afraid of the new creative director. Don may not have been the best boss, but at least he was taken seriously.

Anyway, let’s get back to the theatrical property no one will stop tweeting about: Ginsberg’s nipple.

Poor Ginsberg. We were all bemoaning his lack of storylines this season, but this is not the way we expected that issue to be resolved.

Evidence of his mental condition, which now seems like paranoid schizophrenia, has been abundant this season. But he’s always been out there, so when he yells at the computer, “STOP HUMMING, YOU’RE NOT HAPPY,” Peggy and Don exchange knowing glances but don’t appear to think much more about it.

Later, when he unexpectedly drops in on Peggy at home and floats the theory that the office’s new computer is turning everyone into “homos,” he’s starting to look a little worse for wear. It really sinks in, though, when he assaults Peggy — I actually worried that he was going to rape her, thanks to that violence and sexual content warning.

Thankfully, Peggy is able to reject his advances and get him out of her house — but the next Monday at work, he presents her with his severed nipple, physical proof of his psychotic break.

“I removed the pressure,” he says cheerily. “It flows through me now.” He even refers to the stitched-up remnants of his right nipple as “a valve.”

Peggy tells him to wait in her office, which he does, looking like nothing’s wrong, while she makes her way to a telephone. As he’s taken out on a stretcher, Ginsberg yells, “Get out while you can.”

Is this the first episode of Mad Men wherein we feel more sympathy for Betty than we do for Megan?

Megan — who’s apparently giving it another shot with Don — shows a seriously conniving side throughout “The Runaways.” First, there’s the way she shuts down when Stephanie says she knows all of Don’s secrets. You can see Megan’s face change, and she promptly offers Stephanie $1,000 to buzz off.

But really, can you blame Megan for being fed up? She’s voiced frustration at how infrequently Don comes to visit her in the past. And now, he’s coming out to visit at the last minute not because he wants to see Megan, but because his “niece” needs him.

Stephanie turns up at Megan’s, uses her shower, borrows her robe, asks her for steak and then turns it down after it’s already been cooked. Megan assumes Stephanie has called Don because she wants attention from him. Don insisting that he and Stephanie would “stay out of the way” while Megan hosted a party probably didn’t help.

So she protects her turf by writing Stephanie a check while also insulting her — “I don’t think Don would trust you to make your own plans.”

Later, she does a sexy dance with a hot beardy actor friend during the party, apparently not caring at all that Don is watching the whole thing. She’s always been an exhibitionist, and she and Don have always had unorthodox foreplay methods (remember her underwear-clad “you’re a dirty old man” scene from season five?), so she’s probably just using the dance to set the mood.

In fact, Megan insists on it. She feels this is the only way she can top Stephanie, who has such an emotional bond with Don. Stephanie might “know all his secrets,” but Megan takes a page from her mother’s book and tries to win him back using sex.

Well, the plan unsurprisingly backfires. The next morning, Don doesn’t mention it. His mood is far from one of postcoital bliss. In fact, he seems grumpy in the kitchen — until Stephanie calls. Megan throws a passive aggressive fit while he’s one the phone, complete with slamming silverware.

As soon as Don knows Stephanie is okay, he says he has to get back to New York. Then, Amy emerges from the bedroom and promptly leaves, looking embarrassed.

Megan’s left alone with her coffee and her burning cigarette, which she tosses onto the counter in a snit.

It’s surprising that Megan is giving Don another chance, especially when she’s clearly surrounded by so many other desirable men in California. Maybe it’s because she doesn’t appear to be working at all. Her only security right now lies in her marriage.

This episode gave us the moment Betty apologists have been waiting for. Everyone’s favorite Hitchcockian housewife has finally realized that her whole dynamic with her husband is bull shit.

After Henry has repeatedly chastised Betty for talking about the war with their neighbors, he comes home from work and tells her to move to the living room. She doesn’t want to move — she’s comfortable where she is. So she finally raises her voice.

“I’m tired of everyone treating me like I’m stupid,” she says. “I speak Italian. I think all by myself.”

“Why don’t you run for office?” Henry shoots back.

And so, Betty’s finally been mobilized. She probably won’t get a divorce about it, but we wouldn’t be surprised if she picked up some hobbies, became politically aware, and attended some consciousness-raising meetings.

After all, Betty does speak Italian. Before she met Don, she was working as a model, travelling to fashion capitals around the world. And having graduated from Bryn Mawr College, she’s probably better-educated than half the men on this show, most notably her ex-husband. She’s right to finally be pissed off at how little the men around her value her opinions.

Janie Bryant also deserves a shoutout here, for finally bringing Betty’s clothes into 1969. Just as she realizes she can be her own woman, her hemlines are cropped to a daring mid-thigh length. Nice.

DON: He threw a hail Mary with that tobacco meeting. In any other episode, that would be the biggest deal — but the other characters were much more interesting than Don this time around, which sadly is happening more and more. We’ll see what happens with Don next week, but even he looked nervous at the end of the episode. Crashing that tobacco meeting definitely constituted rule-breaking activity, so it’s hard to imagine what he’ll think of next if he wants to stay in the company. Maybe he’s hoping to finally move to California, with or without his SC&P partnership as a financial cushion.

JULIO: It’s possible Peggy was baby-sitting him, but it’s more likely that they’ve struck an unlikely friendship. Of course, that might just be because of Peggy’s sweet TV set, but it’s heartwarming to see that Peg can now get along with her former adversary, and that she’s getting at least a little human contact outside of work.

STAN: How about that ascot! Stan is killing it on the sartorial circuit this season. Also, it’s great that he continues to needle Lou. Someone’s gotta do it.

AMY: Did anyone else get a creepy vibe from Amy as soon as she hit the screen? She’s one of those personality-free people who latches on to a cool person — in this case, Megan — because she doesn’t really know how to navigate the world on her own. She won’t leave Megan’s side — until Megan takes her willingness too far by pushing her into a stoned threesome with her husband. Amy’s down to paint Megan’s toenails and run her errands, but this was too much even for her. Drippiness aside, you can’t blame her for feeling too weirded out to stick around the next day.

Mad Men 704: Meanwhile, Back at the Commune… 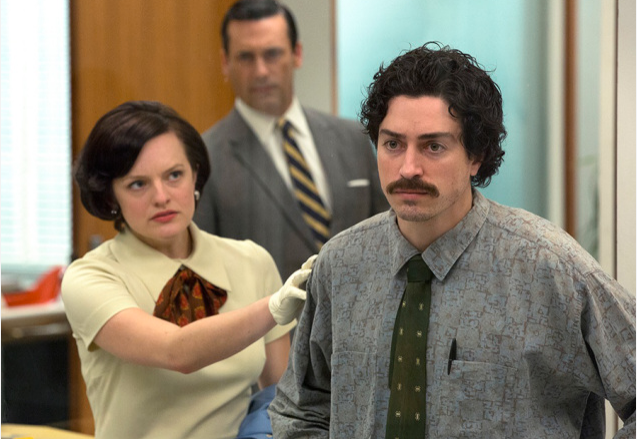