Finally, a non-miserable episode of Mad Men! We needed this one. Barely anything non-horrifying has happened since Dawn’s promotion in episode three of this season. This can only mean one thing: next week’s mid-season finale is going to be a complete shit show. But first, let’s discuss the good times.

Last night’s Mad Men dealt with both nostalgia and the need for change. Everyone except Ted was back in New York, and we were reminded of the way things were in the good old days, back before people were slicing off nipples and coercing their stoned friends into threesomes. But the episode also hammered home the fact that for all the fuzzy feelings we have for the way things were, we still haven’t gotten to the way things are.

Mad Men is currently occupying a no-man’s-land where families are breaking down and hierarchies are being shaken up, but huge groups of people are still being treated like second-class citizens due to their gender or sexuality. The establishment is crumbling, which will facilitate change in the long run. But women like Peggy still can’t outwardly cry bull-shit when someone like Pete Campbell insists her work would be more acceptable coming from a man’s mouth. And men like Bill have to silently take it when undercover cops beat their faces to a pulp because of their sexuality. The jig is up, Campbell. (Photo via AMC)

(he’s too pleased with himself to go above a seven)

Just when everyone was starting to like California Pete, he goes back to New York and back to his old misogynist tricks.

First, he’s somehow surprised that his daughter, who he hasn’t seen in months, doesn’t recognize him. And after spending the day with her, the only thing on his mind is somehow exacting revenge on Trudy for daring to be out of the house during his visit. So he sticks around, leaving Bonnie high and dry just so that he can berate Trudy when she gets home from her date.

When she arrives, Pete tries to assume his former role as man of the house, while Trudy pretty much laughs in his face. We’re getting a divorce, she insists. Now leave.

When Pete is back by Bonnie’s side, she rejects him, too, aggravated that he stood her up and she had to miss Oh, Calcutta! When we see her on the same plane as Megan at the end of the episode, she appears to have dumped him in favor of flying back alone, which is great because she can do so much better than sniveling Pete.

Pete manages to end the episode on a happy note, despite everything. See? He’s unflappable. His most significant line in the final Burger Chef scene is, “I hate the word ‘family.’ It’s vague.” It’s not tough to understand why someone in his situation would feel that way, is it? A wild night at Burger Chef. (Photo via AMC)

At the top of the episode, Peggy is surveying customers at a suburban Burger Chef. It’s pretty degrading work for someone who’s been at SC&P long enough to lead the creative team on this particular account.

When we find out later that Peggy recently turned 30, it’s easy to imagine her feeling even more peeved that someone of her stature is stuck doing such menial work. Nobody would ever make Don go out and collect data in a fast food parking lot, not even in his current disgraced situation.

The indignities don’t stop there. Later, Pete asks Peggy to step aside and let Don deliver her pitch. Peggy can step back in when it’s time for the mother to speak, Pete offers. “He has the authority and you have the emotion,” Pete says.

Finally, Don pushes her over the edge by suggesting a new take on the idea. His idea that the commercial should be told from the kids’ point of view is hardly groundbreaking, and he must know that. It seems like he did it just to get into Peggy’s head.

And it works — only to backfire on Don later while he’s trying to eat dinner (spaghetti, of course) with Megan when Peggy calls to passive aggressively berate him for suggesting the new idea.

But finally, Peggy and Don restore their collegial dynamic. Peggy finally relents and asks him to explain his own CLIO-award-winning thought process. Only then, when Peggy has admitted his superiority, can Don treat her with the respect he used to show her. Don always says that he cares about good work and good work only, but if that were the case, he would have cooperated with Peggy from the beginning instead of stomping his feet until she admitted he was better than her.

Peggy’s second happy moment has a more unlikely setting: Burger Chef. She, Don and Pete are enjoying their fast food when she declares that she wants to shoot the ad in this very location.

Earlier, she mentioned that part of Burger Chef’s appeal is its lack of televisions. Clearly, Peggy and the other characters are longing not only for family, but also for a domestic space that’s unmolested by technology. But even by 1969, for most people, that idea of home is never coming back. Little do Peggy, Don and Pete know, electronics will soon be encroaching on family life in much farther-reaching ways than the humble television set ever could. Don appears to be feeling better than he has all season — and that’s saying something, since his marriage is apparently on its last legs.

He enjoyed (or endured) a surprise visit from Megan in this episode. It seemed like everything was going well with them, and most of their time together harkened back to the marital bliss they shared in the fifth season. Megan even got her hair bobbed again so that she’d look exactly like her East Coast self throughout the ep.

But then, she starts rummaging around in their closet to find her fondue maker, because if there are two things Megan loves to make, they’re spaghetti and fondue. Don looks worried as she packed a box with all of her stuff. He suggests he could bring it next time he visits.

At this, Megan’s face falls. She quickly recovers and suggests that she and Don meet somewhere else, instead of New York or California. She’s clearly up to something. For an actress, Megan has never been good at concealing her true feelings. This is also clear when she’s smiling smugly in her first class seat on the airplane back to California.

After his awkward interaction with Megan, Don heads to work to rebuild his relationship to Peggy. He gets to father her in exactly the way he was dying to take care of Stephanie in the last episode, before Megan shooed her away. It’s nice to see that Don wants to help people, but he might consider parenting his own children instead of treating women who are only slightly younger than him as his de facto charges.

By the time he, Peggy and Pete get to Burger Chef, Don’s actually in a good mood. He even sticks up for Peggy when Pete tries to tell her what to do. “She’s doing it the way she wants to do it,” he insists. Pete sighs, and Don, never one to miss an opportunity to emasculate Pete, signals to him that there’s some schmutz on his face. A truly happy ending.

The pathologically chipper Bob has finally cracked. He discovers that both Joan and Bill from Chevy have realized he’s gay. He continues to try covering it up, but eventually folds and tacitly admits it to both of them.

This was the first we saw of him all season and it might also be the last, since he got a new job at Buick. Knowing that his new coworkers will only take him seriously if he is a family man, he throws a Hail Mary and asks Joan to marry him, seemingly out of nowhere.

Joan, of course, is much too sharp to end up as her subordinate’s beard. Although she seems befuddled at first, she’s onto him. She tells him he “shouldn’t be with a woman.” Then, like the boss she is, she quickly switches gears to try and pump him for details of Chevy’s imminent departure from SC&P.

But Bob isn’t done embarrassing himself; he points out to Joan that she’s nearing 40, living with her mother and son. What more could she want?

Joan is rightfully insulted, and shows him the door. This may be the last we see of Bob. Despite his constant grinning and sucking up, he is a pretty sad guy. Between the Manolo catastrophe and his habit of coming on to (and being rejected by) superiors like Pete and Joan, he clearly senses that he’s worn out his welcome at SC&P. JOAN: Our Lady of Jewel Tones didn’t get much play this ep, except as a foil to Bob. It was nice to hear her insist she’d rather die hoping for true love than settle for some arrangement, however Carrie Bradshaw-esque.

MEGAN: Megan, as previously noted, is clearly up to something. Is she in love with her annoying friend Amy, as some tweeters suggested? Probably not; she needs a more formidable partner than that malleable yes-woman. Maybe she’s cheating on Don with the hot bearded actor from the last episode. Either way, it’s about time she served Don with divorce papers instead of continuing the charade.

HARRY: He finally got the partnership he’s been begging for, as a PR ploy to spin coverage so that SC&P can save some face when the news that Chevy’s dropped them comes out. He probably has no clue that nobody wants him to be partner. Like Pete, he’s blissfully unaware of the fact that most people can’t stand him.

CLARA: She’s enormously pregnant out of nowhere! What is that about? Is she married? What’s with all the pregnant people this season? Matthew Weiner is clearly trolling us.

TED: We got a glimpse of Ted this episode, which basically served to remind us of his existence. Raise your hand if you feel bad because you realized this week that you don’t really miss him :\ 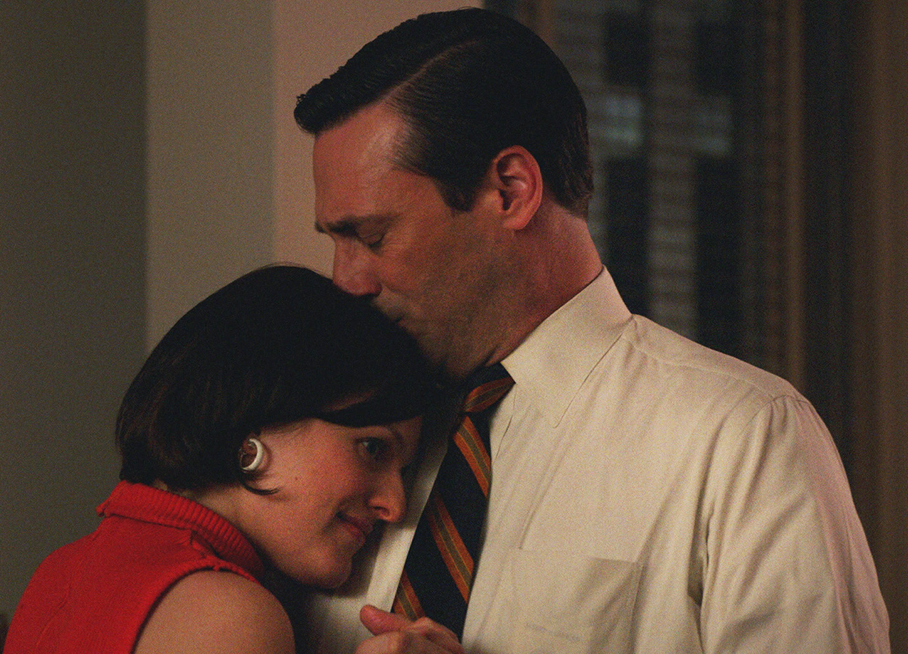