New season, new rules. The contestants have been cut down from the 100 who individually presented to the 30 best home chefs going at it in the MasterChef kitchen this season. All trying to get their MasterChef apron, their ticket into the competition for the grand prize of $250,000 and a cookbook deal.

Cue the music. Heavy action movie score orchestra kicks in (and rarely stops throughout the show) as we see the group of hopefuls intercut with flashes of Gordon Ramsey yelling during future challenges, culminating in the 30 storming the kitchen. As they enter, contestants are getting their TV reality competition “I’m not here to make friends” game faces on. The personalities are starting to show. Some opening statements from some yet to be named home chefs include: “I want that apron” and “I’m getting an apron.”

Enter the MasterChef, Gordon Ramsay,  joined, as always, by his back-up singers, restaurateur Joe Bastianich and a newly slimmed down chef Graham Elliot. The 30 break out in wild applause. Now it’s time to get down to business. Gordon instructs the contestants to turn over their cutting boards to reveal a mirror. The challenge is for each competitor to create a signature dish that represents his or herself in one hour. Graham tells the 30 “think about your life story and put it on that plate.” Tyler, 27, from Ohio is making venison because he’s a hunter. Being a hunter also explains Tyler’s camouflage shirt. Contestants have full access to the huge MasterChef pantry with every ingredient anyone would need. Time to cook.

Did you think that was enough? Well you were dead wrong. Gordo, Joey B and Skinny G are watching, tasting everybody’s dishes as they cook. At any moment a contestant can be thrown out of the kitchen. OK, that’s it. Let’s get cooking.

The clock starts ticking and the 30 are scrambling in the pantry  grabbing their ingredients in a frenzy. Home chef Willie explains why he’s cooking apricot chicken. Willie is a huge brightly dressed guy and very likable. If he doesn’t go far these producers are dopes. Francis is a molecular gastronomist and, judging by his clothes, probably in a ska band.

Everyone races to their cooking stations and fires up the burners. Gavin, a confident man in a wooden bow tie making chicken liver ravioli touts that he is going to crush everyone with his skills. Elise, a 28 year old E-Learning Administrator from Birmingham Alabama, begins to explain her dish, blueberry goat cheese basil hand pies, and fights back the tears explaining how bad she wants that apron. She recently realized that she doesn’t want to be “working in a cubicle the rest of her life.” Hmm, you telling me cubicle life isn’t the dream it’s supposed to be? Hope Elise makes it out there. As the GJG (Gordon, Joe, and Graham) check everyone’s progress Joe and Graham don’t think too much of Tyler’s chimichurri sauce and Gordon tells Gavin his chicken liver needs salt. Oh no, Francis broke his syringe that he needs for his Bill Nye gastronomy. Looks like Francis is screwed. He’s gotta shoot up his spaghetti with some science. Gordon calls a timeout because someone is getting the boot.

Who the heck could it be? Gordon proclaims that for the crime of not tasting as he cooks and some bland ass chicken liver, Gavin and his bow tie are banished. That better put the fear of god into the remaining 29. Gordon ain’t gonna play. Francis is going to try to replace his syringe with a squeeze bottle and tube. Time to meet Courtney who explains why she’s a stripper and making gnocchi. She’s Italian and she’s broke. No wait. Reverse that, I think. Either way she’s all those things and making gnocchi. Courtney wants off the pole and in the kitchen. Still sounds better than Elise’s cubicle.

Gordon is checking in on Elizabeth who’s making peanut butter bread pudding. He’s afraid that it’s not going to be done cooking in time so he suggests she make some in a flat tray. This is the same guy who threw out Gavin for not salting his liver enough? Somebody’s a softie for PB&J. The fellas discuss some of the faves so far. They like Dan’s ramen, Tyler’s chimichurri correction and Willie’s sauce. Those three are all looking good for aprons.

Knives down! Only 10 minutes to go and another home chef is getting bounced. Joe tells Natanya to shut down her gas for too many technical errors. Her sauce was “broken” and something else that was unGoogleable. No messing around. We’re down to 28.

Time’s up. Aprons are about to be given out. Courtney, the exotic dancer from Philly, and Willie, the big guy from Texas, both get aprons. No doubt those two need to be in the game. Willie is already the people’s champ. If you don’t love Willie you need to check out how you’re treating the people in your life because you are probably an asshole.

Now, what about the others we met and the so many more who didn’t have the personality to get the screen time. A bunch of them get aprons too. Seventeen more aprons get given out. including Tyler and his deer meat and a bunch of who-gives-a-crap. One more apron left and the rest are going home. Aaaand it goes to…Elizabeth. The bread pudding that Gordon saved gets the last apron.

Doesn’t sound fair but too bad Elise, looks like you will be in a cubicle ’til you die. Elise is about to cry for the second time.  Maybe Gordon can cheer her up while he tells the losers about how they’re good too and to try again and whatevs. What’s that you say, Gordon Ramsay? All the losers get another chance? Guess it was kind of early for the show to be over.

Round 2 – battle of the not as good as the other ones is about to begin. The contestants are given limited ingredients. The most common things found in almost every fridge, they say. No not mustard and old lo mien. That’s just your apartment. You need to get it together. A good American refrigerator has bacon, potatoes, carrots, shrimp and chicken. If you don’t have those things you’re probably a terrorist or a vegan. The remaining nine have an hour to prepare a dish. Wait! That’s not all. The home chefs get to select Gordon, Joe or Graham to cook in the challenge as well. They pick Gordon Ramsay because they aren’t complete idiots. Clock is ticking, it’s going down. Corey, another bow tie, is making a potato and parmesan soufflé and fried chicken. Elise is preparing a chicken pot pie. Gordon warns her that it’s risky following pie with pie. Is this woman crazy?

We finally get to meet Leslie, a 56 year old stay at home dad, from Malibu. Holy crap is this guy rich. He lives in huge house and has a yacht. What good is being loaded if you can’t tell people about it on TV. Looks like we might have a villain. By that I mean I don’t like this guy. Astrid from New Orleans is making a mess at her cooking station. She’s throwing food on the ground. Even the home chefs who already won aprons and are watching the action from the balcony are talking about it. Joe stops the action to call it disgusting and dangerous. Is Astrid going home? Nope, a warning. Gavin must be so pissed. Some trash talking between Leslie and the winners happens for an unknown reason. Maybe they don’t like a rich guy trying to win cash either. Joe and Graham are very impressed with Gordon’s shrimp dumplings. Leslie, Corey and lil Gordon bring up their dishes. Gordon points out to Corey that you don’t “play with the soufflé.” You know that’s true because it rhymes.

Gordon attempts to get the soufflé out of its dish but breaks the plate he’s tapping it on. Gordon apologizes for breaking the plate but says “the dish was broken way before that”. Wicked burn, Ramsay. Corey is done but Leslie gets an apron. Messy Astrid gets one too. Now it’s down to Francis the gastroenterologist and weepy Elise who cries again. She must really hate her life.

Francis get the apron. Gordon tells Elise that he wanted her to come out of her comfort zone and she just gave him another pie. He’s not happy about that. She cries a little more and she gets to wipe those tears with a MasterChef apron. No cubicle yet. Elise might have a shot if she can pull it together emotionally. She had to promise “no more pies”. Looks like it’s going to be one heck of a season. 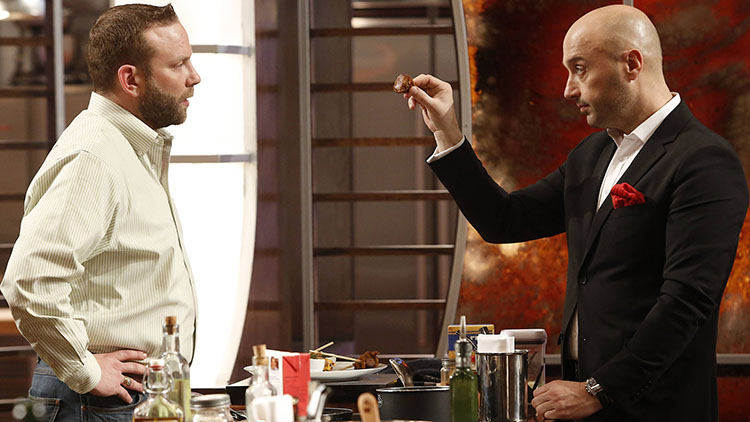