Dr. Angelou celebrating her birthday at a garden party in 2010. (Photo: Getty)

Inspirational quotes about love, life and happiness appear all over Instagram, Pinterest and Twitter. They’re usually corny and easy to mock — but once in a while, you might stumble across an aphorism that makes you think.

The poet, memoirist and general pro at living an awesome life Maya Angelou, though, was a master of the inspirational tweet. And it’s no wonder. She had enough good advice up her sleeve to count spirituality junkies like Oprah Winfrey as followers.

Dr. Angelou died earlier today in her North Carolina home, but her Twitter feed, like her published written works, remains a source of no-nonsense advice and motivation. It remains to be seen whether her Twitter account will be run posthumously by a staffer or relative, as in the case of another beloved tweeter, the late Roger Ebert. But either way, it’s enough that her tweets have functioned as little oases in a sea of bad advertising, self-promotion and personal branding.

Here’s a collection of some of her best.

17. For snapping out of a wishy-washy mood:

Life loves to be taken by the lapel and told: "I'm with you kid. Let's go."

16. For dispersing a pity party:

Whining lets a brute know that a victim is in the neighborhood.

If you cannot make a change, change the way you have been thinking.

14. For when you’re tempted to let somebody’s closed-minded comment pass by unchallenged:

We must be warriors in the struggle against ignorance.

You don't have to tell everything you know, but let what you do say be the truth as you understand it.

12. For when you’re slouching, literally and figuratively:

My grandmother used to say, "get some starch in your backbone." We could all stand a little straighter.

10. For when you’re tempted to complain:

I loved to dance but at 23 my knees were shot, I didn't know what I was going to do. Years later I began to write and I still love it.

9. To keep from resting on your laurels:

When I reach North Carolina, my shoulders relax, in that sense I am a country girl.

7. For when you’re being a little lazy tbh and need a swift kick in the pants:

Give it everything you’ve got, can’t do is like don’t care. Neither of them have a home.

6. For when you’re wondering whether to stand up for something:

I agreed a long time ago, I would not live at any cost. If I am moved or forced away from what I think is the right thing, I will not do it.

5. Just a good general goal to shoot for:

Let me tell so much truth, I want to tell the truth in my work. The truth will lead me to all.

4. For when you’re feeling greedy:

You can only become truly accomplished at something you love. Don’t make money your goal. Instead pursue the things you love.

3. When running out the door for a friend date:

2. For when you wake up on the wrong side of the bed:

This a a wonderful day. I've never seen this one before.

1. And her first tweet, which is especially bittersweet as Dr. Angelou moves on to that great big garden party in the sky:

Still enjoying my garden party. I am so thankful. I am a child of God and so are all of you. 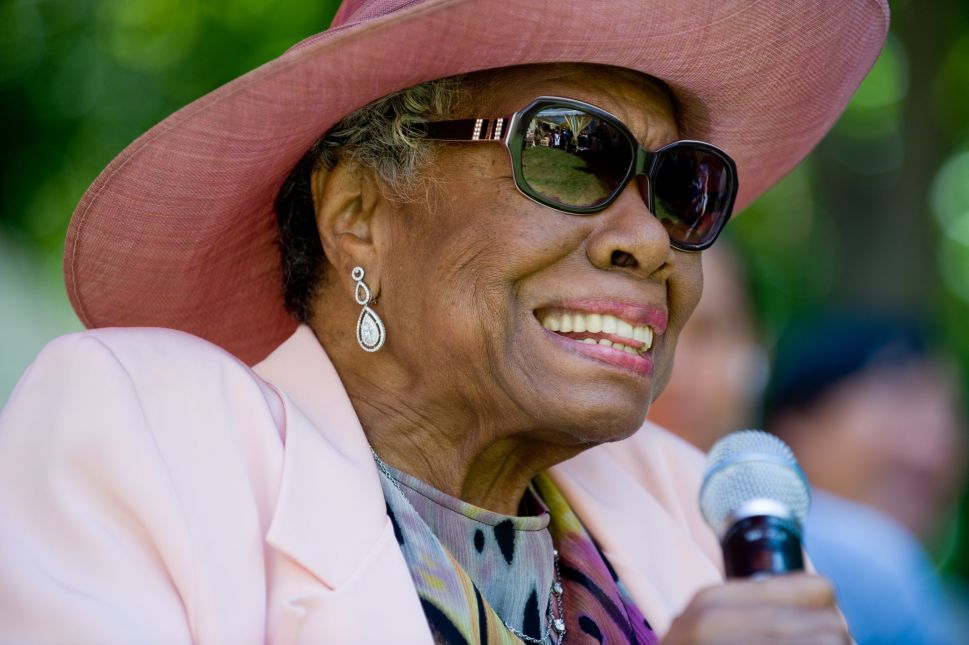