The city has struck a nine-year deal with the teacher’s union that will provide significant retroactive pay raises and usher in new classroom reforms, Mayor Bill de Blasio announced this afternoon.

The agreement marks the first major labor deal of the new de Blasio administration, which has long described the more than 150 expired municipal labor contracts–left open by his predecessor–as the most pressing challenge of his first term.

The new contract would begin, retroactively, on November 1, 2009, and provide retroactive four percent pay raises for 2009 and 2010–comparable to the increases granted to many of the city’s other workers under former Mayor Michael Bloomberg.

The retroactive portion of the raises will amount to at least $3.4 billion, including pension costs, according to Doug Turetsky of the city’s nonpartisan Independent Budget Office.

In exchange, the union has agreed to more than $1 billion in health care savings, according to the administration. The savings would be achieved not through increased contributions, however, but through measures including an audit to make sure only those eligible are receiving benefits and centralized drug purchases. If the same reforms were extended across the workforce, the city claims they would yield $3.4 billion in savings–“effectively bending the curve of rising healthcare costs for the first time.”

The deal also includes reforms to various rules, including changes to the “Absent Teacher Reserve pool,” where teachers are sent if they can’t find work in city classrooms. The new contract will include rules that allow the city to permanently fire teachers if, for instance, they are twice returning to the pool for poor performance by principals. The rules also expand the definition of sexual misconduct, which will make it easier for the city to fire teachers for actions like inappropriate touching or texting, officials said.

The new rules also pave the way for merit pay for high quality teachers, creating new categories of “Ambassador” ” Model” and “Master” teachers, who will earn between $7,000 and $20,000 more a year. A new “Hard to Staff School Differential” would also pay teachers at the city’s 150 toughest schools an extra $5,000 a year.

As part of the deal, the UFT has also agreed to allow 200 schools to operate outside of existing DOE regulations and union rules, allowing the city to experiment with a longer school year and school day, among other changes.

The deal also requires twice as many parent-teacher conferences each year, and changes to teacher evaluations.

A union source said that negotiators left the UFT’s headquarters at around 9 p.m. last night and continued finalizing the deal’s language into this morning via email. The deal follows intense negotiations that went into the “wee hours” in recent weeks. “The last coupe of says have been pretty intensive,” the source said.

As the first major union of the de Blasio administration, the new deal will set the precedent for negotiations with the city’s 150 other labor unions, who are also seeing retroactive raises that some estimate could cost the city nearly $8 billion.

The terms surprised many in the labor community, which has been pushing for higher increases than the zero and one percent annual raises included in many years of the deal.

“I was surprised at how well the administration’s negotiators did considering the hand they were dealt,” said one labor source, who said the city had won “an incredible amount of leverage to win work rule reform, more healthcare givebacks, a change in pension payments, whatever’s on their agenda” with other unions.

And some were already trying to distance themselves by pushing against a one-size-fits-all approach.

“Every union’s members have different needs,” said Al O’Leary, a spokesman for police union chief Patrick Lynch, asserting that a deal “that satisfies one union’s needs may not satisfy the needs of other unions.” 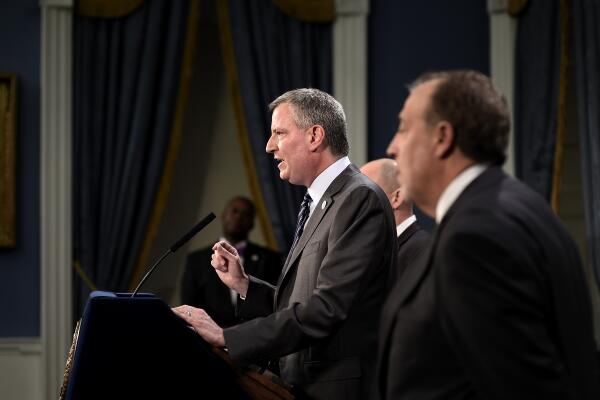