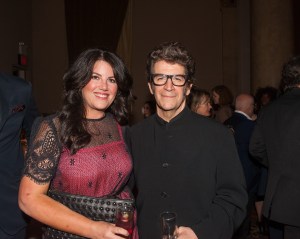 An hour into the Kitchen Gala honoring Robert Longo, Monica Lewinsky walked upstairs to the center portico of Cipriani Wall Street and approached the bar. One by one, those among the annual event’s usual smattering of curators and dealers did double takes as they walked by. It was inevitable that, after breaking a decade-long silence with a tell-all in Vanity Fair this month, Ms. Lewinsky would start to show up to parties and schmooze.

And why not at a gala for the Kitchen, the nonprofit art space that has hosted, among other landmark happenings, a Hermann Nitsch performance wherein naked people writhed in the entrails of a freshly killed animal. No matter that her last public interaction with the art world was likely a March 2001 profile in New York magazine, when she approaches an Yves Klein at MoMA and says, “I made something like that in nursery school.”

“We’re just going down to dinner, actually,” Ms. Lewinsky told us as the cocktail portion of the evening ended. She had arrived with David Friend, the Vanity Fair editor who spent the last few years convincing her to write the piece for the magazine.

But she smiled at us and let us ask why, exactly, she was there. Was she more into Robert Longo than that wily Yves Klein?

“I’ve been a fan for a long time, since I was a teenager,” she said, and with that Ms. Lewinsky was off, for the time being at least.

Eventually, the crowd refocused its attention on the matter at hand, Mr. Longo, who circulated among the gala attendees in a black suit.

“The Kitchen’s a really important place,” he said to us, of his honor. “It’s like being called upon to do something that you have to do, you know?”

Mr. Longo also informed us that Keanu Reeves, a friend since starring in Mr. Longo’s big-budget cyberpunk romp Johnny Mnemonic, would not be attending, despite being listed on the invite—tantalizingly—as an honorary chair.

“I got an email from him this morning, he’s actually in Chile,” Mr. Longo told us.

We also brought up “New Film Stills,” the show by James Franco at Pace Gallery that was a perverse homage to Cindy Sherman’s “Untitled Film Stills” series, which Mr. Longo helped stage and shoot.

“I don’t care about it!” he said. We asked him to elaborate, and he began shaking his hands up and down, wildly, and saying “No! No! No! No! No!”

Michael Stipe has collaborated with Mr. Franco on a number of projects, including a video for the R.E.M. song “Blue” that starred Lindsay Lohan, but when we asked about the actor’s recent show at Pace, Mr. Stipe stared at us in silence for an uncomfortably long time. He was more forthcoming about Mr. Longo.

“Robert directed the first video for my band that gave us a top-10 hit single, a song called ‘The One I Love,’” he said. “I think Robert’s participation had a lot to do with it being very successful.”

More tributes to the honoree took place onstage during dinner. Ms. Sherman reminisced about their time dating, and the actor John Turturro explained the woe he shares with the honoree, describing Mr. Longo as a “fellow Knicks sufferer.” Mr. Reeves showed up in a spastic video, where he shouted a few nice things about the artist while sitting in front of one of the artist’s charcoal wave drawings, which in this case doubled as a Point Break reference.

Later, even as the old guard headed home and a new, younger host committee arrived for the after-party, Ms. Lewinsky remained by the bar. At one point, we introduced her to the artist Jeanette Hayes, who told her that she produced paintings “about the internet.”

“Monica,” Ms. Hayes asked at one point. “Would it be possible to take a selfie with you?” 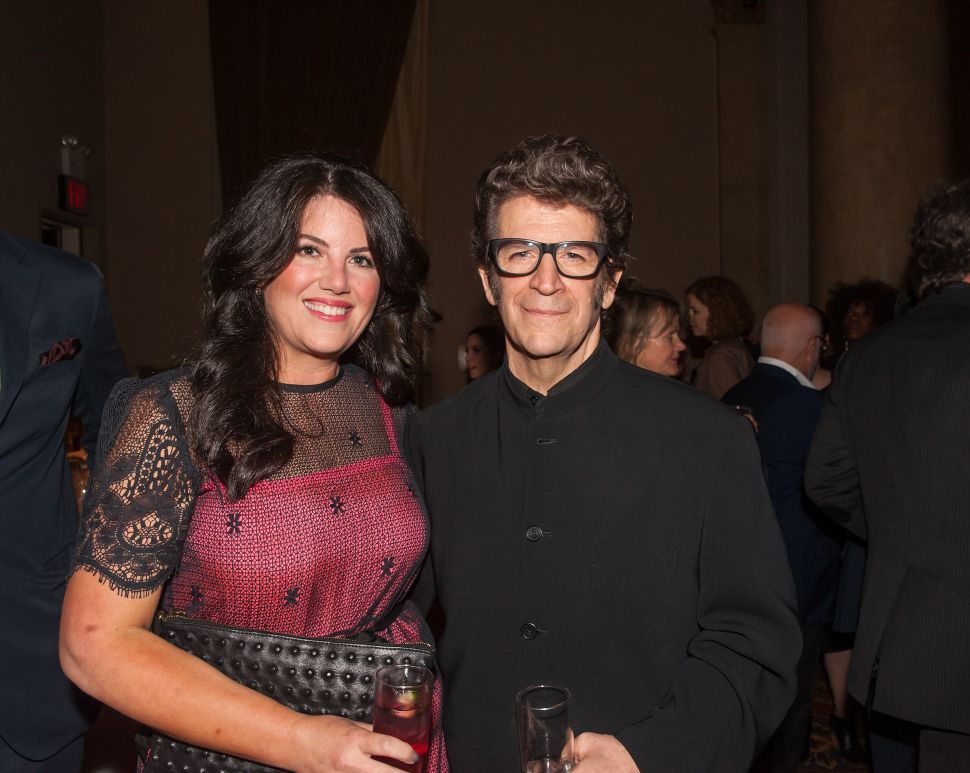