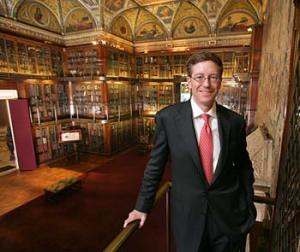 The board of the Cleveland Museum of Art voted unanimously Tuesday morning to appoint William M. Griswold its next director. Mr. Griswold, currently the director of the Morgan Library on Madison Avenue, will begin his post in early fall, according to the museum. He’ll be joining the staff following a $350 million expansion, and on the heels of the institution’s 100th anniversary in 2016, as well as a good deal of controversy after the abrupt exit of the museum’s last director, David Franklin.

Mr. Franklin had been the director of the Cleveland Museum of Art for just three years–helping to oversee the final stage of that aforementioned expansion–when he left for “personal reasons,” as he had told the Cleveland Plain Dealer. “Personal reasons” turned out to be a real doozy: he had been lying for months about having an extramarital affair with a museum staffer, who ended up committing suicide last spring.

As for Mr. Griswold, he became the director at the Morgan in 2008 after serving as director and president of the Minneapolis Institute of Arts. (He had previously served as a curator at the Morgan for six years.) Under his leadership, the Morgan expanded its drawings department to include more contemporary art, with exhibitions featuring Matthew Barney and Dan Flavin, and also appointed its first photography curator.

“We couldn’t have found a better, more experienced candidate and we’re looking forward to Bill’s leadership for years to come,” Steven Kestner, the chairman of the Cleveland Museum of Art’s board of trustees, said in a statement. “Bill is joining the museum at an incredible moment in its history, with the additional capacity of a newly completed expansion and a 100th anniversary swiftly approaching. It is the perfect moment to begin his legacy of scholarship, innovation and community outreach.”