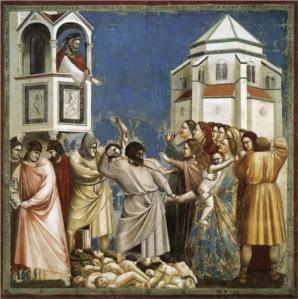 ‘The Massacre of the Innocents’ (circa 1305) by Giotto, in the Arena Chapel in Padua, Italy. (Wikipaintings)

The Harvard Art Museums will reopen this fall with an exhibition devoted to newly restored murals that Rothko made for the school—one of only three commissions that he ever completed. [Harvard Magazine]

The Cleveland Museum of Art, which announced the hiring of a new director yesterday, also concluded that an ancient statue in its collection wasn’t looted from a site in Cambodia. [NYT]

Orhan Pamuk’s Museum of Innocence named the 2014 European Museum of the Year. [The Art Newspaper]

The contemporary art center slated to open in Arles, France, in 2018 sounds like it’s going to be pretty epic. Designed by Frank Gehry, it will be a nearly 200-foot-tall tower with about 260,000 square feet of exhibition space and plenty of amenities (a cafe, a restaurant and so forth). [Artforum]

Jerry Saltz on what the Met should do when it rebuilds it modern and contemporary art galleries. [New York]