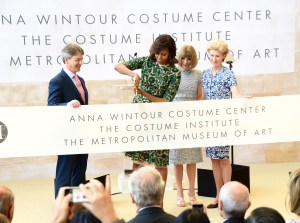 And following Michelle Obama’s inauguration of the institute, here’s Marshall Heyman at the Met Ball. [WSJ]

The reopening of the Picasso Museum in Paris has been delayed again. [NYT]

In case you haven’t had a chance to look at the catalogues yet, here’s a little AP preview of the Impressionist and Modern auctions, which start tonight. [AP]